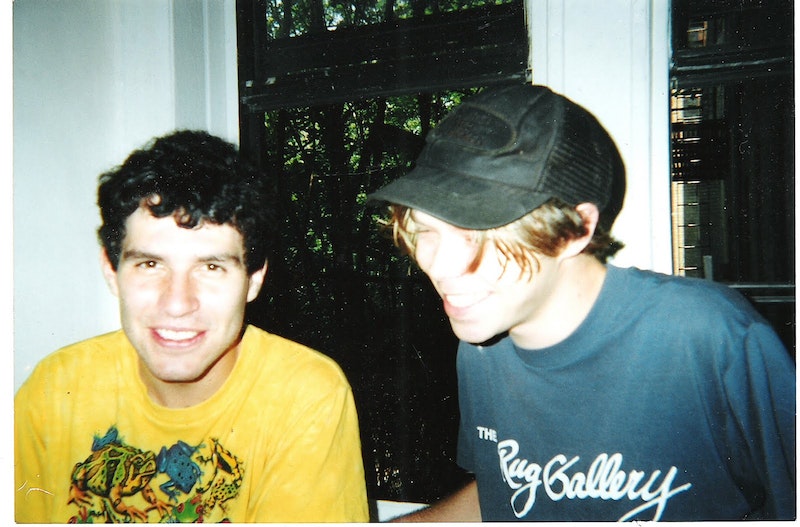 I feel sated. You know that glorious fullness of a quality steak dinner? Where you can do little but just exist, immovable and satisfied like that one super fat Pokémon? Avey Tare and Eric Copeland played the first date of their dual-solo tour at the Metro Gallery in Baltimore last night, with a third set by local lifestyle and actions aesthete Co La. The Metro was as packed as it ever should be, with all the chronic iPhone checkers in the front. But there were no complainers: everyone knew they were being served something rich and heady, even the kids wearing head-to-toe Odd Future apparel. To me, this was a mammoth bill: three heads who’ve made some of the most interesting and enjoyable music of the last decade, in bands and by themselves, all doing the solo thing and letting that stream run pure from their brains.

Co La played a nice kebab of tracks from Rest in Paradise and Daydream Repeater, and alternated between projecting slides on a golden mink coat, doing his best Bowie circa-1978 motions and moves, and taking swigs of champagne straight from the bottle. There’s a solidarity in these actions: it’s acknowledging that watching people play laptops on stage is literally as exciting as watching someone check their email, and that that doesn’t have to be the end of the road. It certainly makes his sets worth seeing and those crappy cell phone videos all the more disposable.

Segue: Indeed! Just as Eric Copeland’s music is centered on disposable sounds. I’ve been a big fan of Copeland for years (check out an interview Splice did with him earlier this year), and I’ll never forget his set at Floristree in October 2009: hunched over his equipment and hidden under his hat, Copeland looked like the alien in a garbage dump that his terrifying music was summoning before my eyes. Just physically scary and paranoid sounds, blasted till you buzz. On Tuesday night he was more subdued, grabbing tracks here and there from recent 7”’s and one-off’s. The Metro’s sound was blanketed by bass the entire night, and it felt like Copeland lost some of the intense attack he gained from the blown-out PA at Floristree. Still, seeing him play outside of Black Dice is always worth it.

Avey Tare (Dave Portner) played a 50-minute set of new material and reworked songs from last year’s Down There. Stationed behind a table decorated with samplers, sequencers, synthesizers, effects boxes, lights, and plastic skulls, Portner pushed buttons and sang, cooing one moment and screaming till his neck veins popped out the next. His set was swampy and dank, but very sequenced. I couldn’t help but wish he had that old black PRS guitar on stage again, and it kills me that he won’t be playing “La Rapet” or “Bat You’ll Fly” (or while we’re at it, “Alvin Row”) any time soon. The more Portner and his bandmates become interested in purely electronic and dubby sounds and song structures, the less interested I become. If your sad, lovelorn songs are built out of pre-determined and recorded parts, inevitably there’s some intimacy lost there. The concert isn’t a moment in time anymore; it’s a showing.

Despite my pet peeves, these guys know what they’re doing and can’t wait to take you there. Hop on, hepcat.