Not George, not Merle, but the guy who taught them. 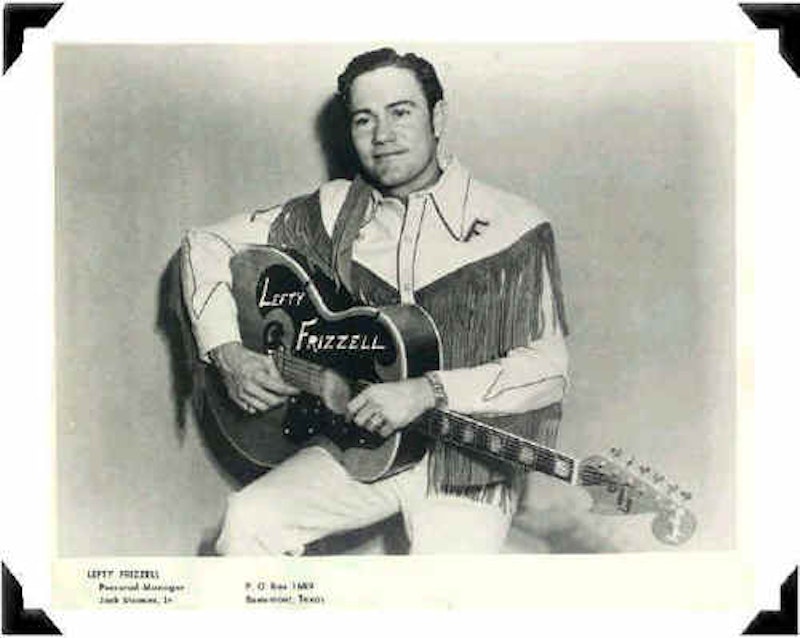 Hank Williams is probably the single most iconic male country star who isn't Johnny Cash. More than 60 years after his death, he's still in a lot of ways the standard for what a country singer should be: mournful, troubled, agonized, and lovelorn, all while wearing a cowboy hat.

Williams' image remains central to the music, and his brilliant songs continue to be covered by those inside and outside the genre. But listening to "Ramblin' Man" or his other hits, it's pretty clear that his singing has little to do with country performance styles now, and hasn't for a long, long time. The keening, half-yodel that Williams took from people like the Carter Family, Jimmie Rodgers, and Bill Monroe lives on in bluegrass and other more rootsy subgenres, but it hasn't ruled the radio for decades.

Instead, the blueprint for country music male singing for the bulk of the 20th century was the criminally under-appreciated Lefty Frizzell.

Where Williams sounded resolutely backwoods, Frizzell moved towards a more sophisticated sound—his smooth voice sliding over and around the lyrics, drawing syllables out here, swooping down to a ribbet there. The Jimmie Rodgers/Hank Williams yodel isn't exactly gone, but it's integrated into the rest of the singing, till it becomes a kind of proto-rockabilly hiccup. On "If You've Got the Money," you can hear him playing with Williams' "Honky Tonkin'," quoting and imitating Hank's rollicking barnyard hee-haw without ever abandoning his own shoulder-shrugging, easy groove.

Williams was better known, no doubt in part because he died an alcoholic at 29, while Frizzell's brutal battle with the bottle dragged out for decades. But it's Frizzell's sublime combination of rough and pop that's lodged in the throat of generation after generation of singers.

You can hear Frizzell all over George Jones' delivery—in the way he draws out "fell down from the waaaaallll" and the deep drop on "seems." Admittedly, it's hard to imagine Frizzell (or really anybody) wearing that pink suit with that haircut, but if he did, you can bet he'd pull out "again" into 12 syllables or so just like his disciple.

Jones tended to emphasize the burrs and bumps of Lefty's delivery. The young Merle Haggard was more even; the hum at the end of "bottom" is the burnished echo of the country yodel. Sounds like what would happen if Bing Crosby tried to sing like Frizzell, or vice versa (though Haggard's eyebrows are more expressive than either's.)

Willie Nelson did a whole album of Frizzell covers (the fabulous To Lefty From Willie) and though the connection between the two performers is oblique, it's there nonetheless. Nelson's jazzy phrasing, wandering now faster, now slower around the beat, substitutes for Frizzell's battery of swallow and drawn-out phrasing. It's a different path, but ragged and right is still the destination.

By the 1980s, there certainly wasn't anyone on the country charts singing like Hank Williams. Randy Travis, though, made his career doing one dead-on Frizzell impression after another. Even the semi-Muzak backing is reminiscent of Frizzell's late decadent, 70s hits like "I Never Go Around Mirrors." (Travis also unfortunately imitated Frizzell's relationship with booze.)

George Strait isn't quite as dead a ringer as Travis, but the Lefty-by-way-of-Merle drawled out "con-fi-dent" and the Lefty-by-way-of-George spurt/spit on "buckets of beer" are still recognizable enough. Strait's last Top 10 country hit so far was in 2012—which means Frizzell, however diluted, is still, rather amazingly, relevant to contemporary country.

Admittedly, Frizzell's influence has gotten thin enough these days that it's more a painful reminder of the past than a living tradition. Brad Paisley's "River Bank" sounds like a fourth-drawer Frizzell imitator trying to rap. Better at that point to have the personality and tradition just completely erased as in the indie-pop auto-tuned atrocity that is Florida Georgia Line. Still, for country stars who do not suck, Frizzell remains a template and a resource. Like one of those elastic syllables, he just goes on and on.