The Hot Club of Cowtown Tears Up L.A. 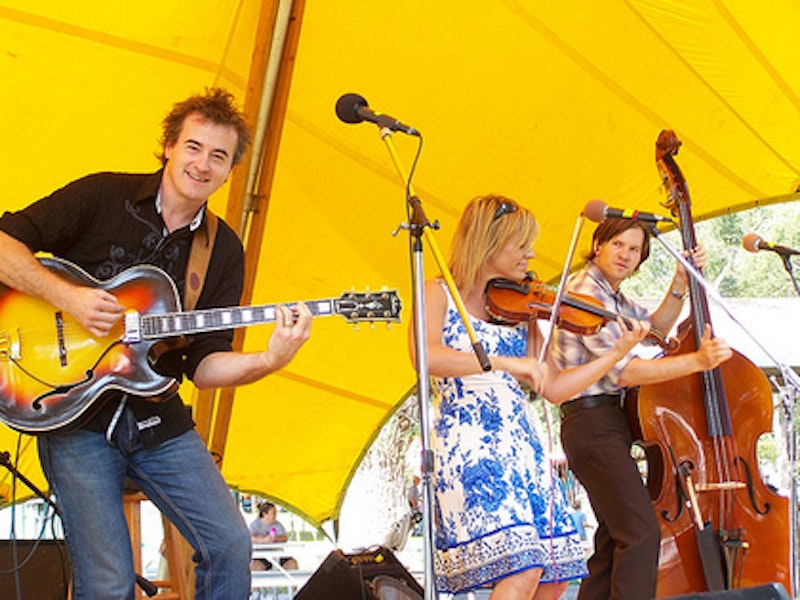 There are few sure things these days, but The Hot Club of Cowtown playing a hell of a western swing show is one. I’m still amazed at how few people know about these guys. The trio is made up of Whit Smith on guitar, Jake Erwin on upright bass and one the foremost gypsy/swing fiddlers in the world, Elana James, leading the way—all three sing beautifully and make such a racket that you’ll think they have a whole gang behind them.

These guys has been going strong since the mid-1990s, touring four continents with the likes of Bob Dylan and Willie Nelson, and recording five swingtastic albums for folk imprint Hightone—Swingin' Stampede: The Hot Club Of Cowtown Playing Hot Jazz & Western Swing (1998), Tall Tales (1999), Dev'lish Mary (2000), Ghost Train (2002) and Continental Stomp (2003) which is a fantastic live album from their second home, the Continental Club in Austin, Texas. Only in their mid-30s, they are the youngest band ever to be inducted in the Texas Western Swing Hall of Fame, and were even hired by the U.S. State Department as the first American band to have a government sanctioned tour of Azerbaijan.

Like other streamlined power trios before them, you never question their relatively small personnel. Who needs a drummer when Erwin pummels his bass so roundly and soundly you can hear a marching band inside it? And who needs horns or a pedal steel or a banjo? Smith and James have such a tight chemistry between guitar and fiddle that you wonder if their intertwined solos don’t require a kind of cowboy telepathy.

They take much inspiration from two giants who transcended the jazz/blues/country spectrums—Django Reinhardt and Stephane Grappelli, who helped found the genre of “hot jazz” with their Parisian Hot Club of France ensembles in the 1930s; and Bob Wills and his Texas Playboys, who likewise created his whooping brand of western swing out of the vaudeville, big band and country traditions of the same time.

Besides being showcases for gifted fiddle players, both these supergroups did what The Hot Club of Cowtown continues to do today—create new “old” tunes out of the bodies of American folk, jazz, blues and even pop music standards, cooking them up into a sweet, stomping, swinging, “hot” concoction that must be experienced live to fully understand. Just like these “hot” bands of old, Cowtown likes to entertain, and in many instances that just means playing whiz-bang fast. While Smith is flying up the frets like quicksilver on reworked classics like “Little Liza Jane” and “The Hamilton County Breakdown” Erwin is laying down the hard-wood track as James crunches along like a train going around a mountain pass until she lets it loose on one of her boot-thumping, skirt swishing, ear-drum-popping solos. Hearing James howl away like a maniac on the fiddle and then pull it back instantly and sweetly sing “I Can’t Give You Anything But Love” is astonishing.

I’ve seen these guys in Los Angeles three times now, the past two at the now-defunct Safari Sam’s on Sunset Blvd. This time I was lucky enough to catch the late show at a quirky 60-seat dive called The Coffee Gallery in Altadena. Not sure how this place stays in business either—tickets are cheap, there’s no booze (but you can bring your own), the seats are strictly plastic lawn-chairs and there’s barely any of them. The sound is so good because you are basically next to the performers; the stage is the size of a park bench. Check out a few of their tunes below. It’s lo-fi, and I scream a few times, so I apologize in advance. Click “Watch in High Quality” under the screen.

Check out Erwin break his E bass string, three quarters the way in. As he admitted after the song, he’s never, ever, in 15 years on the road, broken an E bass string. He had no replacement and played with three strings the rest of the way.

This is one of their better originals.