The Horrifying Sight of Aging and Wealthy Rock Stars 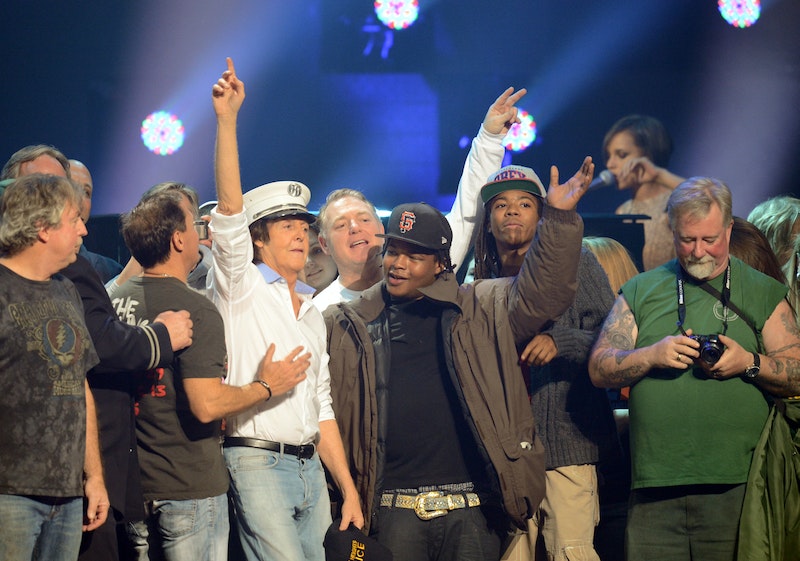 Let us now praise famous aging Rock Gods, for charity, relief, and good will. What the homeless, powerless, and hungry need is a nationally televised benefit concert to watch in HD on their iPads while their mementos sit soggy in the basement. Maybe it’s just another Wednesday night of Must-See-TV, but the sight of a dozen cultural dinosaurs and a gaggle of comedians, entrepreneurs, and hapless interlocutors dancing on stage together so very happy to be seen and heard by two billion people makes me sick in the pit of my stomach. Every year, at a rapidly accelerating rate, the media and cultural consciousness spirals deeper and deeper into a dark and absurd wasteland, where the priorities and values of all our social valves contrast wildly with the state of affairs in the real world. Hurricane Sandy and other freak superstorms like it are clearly a sign that our atmosphere is turning on us faster than even the most prescient predicted, and it looks like my generation won’t make it to 50 before sovereignty-by-assault-rifle takes hold. Maybe we’ll just miss it, but what about our kids? If there’s even a 10 percent chance of civilization collapsing within a hundred years, wouldn’t it make you delirious with rage and disillusionment to see the whole world turn into ostriches?

I mean, let’s look at Top 40—tonight’s gonna be a good night, die young, your love is my drug and other drugs. No wonder today’s hitmakers are absent from semi-austere events like the 12/12/12 concert. But watching the Who perform “Who Are You” as senior citizens in 2012 is a cruel indictment of both the power structure and the youth who are happy existing in a completely separate, small world away from mass recognition. Shun fame, but mass connection is what the underground is missing, the power granted by reaching millions upon millions of people. Kurt Cobain’s obvious absence and replacement with a totally anodyne performance with Paul McCartney and his new song with the surviving members of Nirvana was a stick in the eye of anyone under the age of 65, who thinks that maybe we should recycle these guys every 15 years so that the audience engages with the event instead of glibly making fun of it and complaining.

An even bolder statement: imagine Roger Daltrey, Pete Townsend, McCartney, Chris Martin, Dave Grohl, and everyone else with a dense pocketbook forks over a flat sum for relief in New York instead of this false, disgusting pageantry we must endure. Who knows how much of the money raised will even reach those we choose to ignore 99 percent of the time? It’s not that far-fetched—look how callously 9/11 families were treated, bandied about when convenient and thrown under the bus when they needed money. Oh well, nobody under 30 can afford cable anyway. These international sham events are nothing but a facsimile of a time long past, in an age that demands more than greatest hits or good times. What we need is urgency, desperately. Who knows if Baltimore will ever see another snow? 100-degree days in 2035? Let’s put “Helter Skelter” away for now.