Summing up an eclectic year in music. 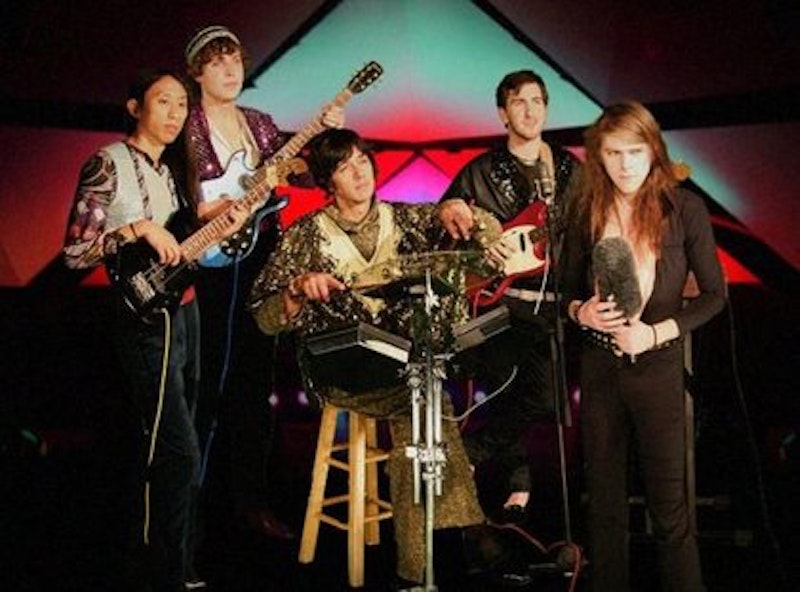 Four or five or maybe six years—but who’s counting?—into the fallen music-criticism world of “no consensus,” the end-of-year rearview glance is as dispiriting an enterprise as ever in at least one sense: common cause is hard to come by. At least most political partisans can know that, in a random crowd of 50 or so people, one or two of those people are in step with their beliefs about the track this country should be on. Musos and critics enjoy no such comforts. There is no joining of hands to sing “Kumbaya”: one lady’s humming “Gangham Style,” that guy’s singing something from Channel Orange, this kid’s giggling at the video for Grimes’ “Oblivion” on his iPad and tuning everyone else out.

So why even do this? Why throw our Top Ten lists up against one another and have epic, meaningless arguments about why our preferences are more just than someone else’s? I’ll give you one reason: because we’re forced, in many cases, not to re-evaluate our favorites but to stumble upon new favorites, or at least to expand our musical worldviews somewhat. One thing that’s amazing and kind of inspiring about the albums selected by the Splice Today music staff—myself, Nicky Smith, Miguel Sabogal, and Noah Berlatsky each drew up an individual Top Ten list—is that there was only one point of overlap. And that point of overlap wasn’t anyone non-Baltimoreans would have heard of or cared much about; it wasn’t Fiona Apple or Frank Ocean or The Weeknd.

It was the interlocking endorphin-rush rock of local super group Horse Lords, which featured on two individual lists. And the rest of our scientific-formula calculated list is, in my humble opinion, diverse and unique. Here’s hoping you find some new favorites among ours.

By turns bratty, catchy, groovy, bitter, sexy, sarcastic, and sentimental, Ariel Pink’s Mature Themes is a song-by-song masterpiece of transcendent, bizarre brilliance. The lo-fi progenitor has proven once and for all that he is several cuts above just about every bedroom imitator his early solo records inspired, and with this, his second major band effort for 4AD, Pink (pictured above) establishes himself as a songwriting genius. From the Zappa-esque “Kinski Assassin,” the heartfelt “Mature Themes,” the resplendent, euphoric “Only in My Dreams,” the infectious goofiness of “Pink Slime,” “Symphony of the Nymph,” and “Schnitzel Boogie,” the inscrutably eerie “Early Birds of Babylon” and “Live it Up,” and the utterly unique ode to impermanence “Farewell American Primitive,” Pink has crafted a batch of songs that are densely layered and immensely fun to devour, get to know, and sink into. Mature Themes explores ideas lyrical and musical that most would consider too silly or wacky to pursue, but Pink pulls it off with abandon and brio, challenging us all to try a little harder, daring us to make something as gloriously giddy and stunningly strange as Mature Themes. —Nicky Smith

Prior to this year, I’d listened to one Co La full length—2011's Daydream Repeater—and that was a workmanlike electronica dance floor exercise, listenable enough but nothing to get excited about. This year's Soft Power Memento, though, sounds like the work of an entirely different laptop. The dance floor is nowhere in sight; instead, what we've got is four tracks of the most spastically robotic jazzy heads this side of top-drawer Squarepusher. The beats are all crippled and broken-backed, the melody is carried by sad-bop horns filtered through sadder videogames, and every so often a feedback squall or scraping noise that-should-not-be be wanders in from the digitized ether. I don't know who Co La is, or from whence he/she/it pulled this particular effort, but Soft Power Momento is my album of the year — mysterious, brief, and perfect. —Noah Berlatsky

Like any genre, black metal can get generic: demon shrieks, plodding drums, feedback, more demon shrieks, classical bridge, and lyrical paeans to medieval torture. Botanist, though, is something else. Instead of the medieval torture, he offers spooky invocations to evil plants. And instead of the usual quasi-rock instrumentation, his songs are built around hammered dulcimer. The result is an evocation of hippie dread that bypasses New Age and heads straight for the druids: a ritual, droning, crystalline whisper that suggests twisted Ents yodeling as they piss upon your corpse. A second disk titled Allies, featuring like-minded collaborators, only accentuates the air of deadly covens gathering. Bizarre, bleak, beautiful and absurd, it'll make you realize that vegetable matter was what was missing from your metal all along. —Noah Berlatsky

America is Dan Deacon’s most ambitious and serious statement yet, confronting the most important and pressing issue of our time, the one no one wants to confront: the environment and the destruction of the planet by cancerous and inhuman organizations like Monsanto and Exxon Mobil. “Nothing lives too long/Only the Earth and the mountains,” Deacon sings on “USA,” the four part epic that occupies all of Side Two and stands as his crowning achievement thus far. The record is a rollicking explosion of polyrhythmic orgasmic glory, acknowledging the immense problems we face as a planet—but instead of nihilism, Deacon chooses communication, celebration, and transcendence through meticulously constructed and emotionally potent music that leaps head-first out of your speakers. “Feel like I’m all flesh and no bone/I’m not the shapes that I’m shown/Hope I get it right tomorrow.” Nothing else captures the anxieties and untapped potential of our generation more accurately than Dan Deacon’s America. —Nicky Smith

Country music has been a sad mockery of itself for the past several decades, and alt-country's been a mirror of that mockery, one mired in a craven pursuit of zeitgeist disguised as nostalgia, the other mired in a hopeless pursuit of nostalgia disguised as zeitgeist. Justin Townes Earle doesn't exactly break out of that narrative, but he does manage to change the tune somewhat. Instead of a lost white rural past that never happened, Nothing's Gonna Change the Way You Feel About Me Now imagines an integrated rural past that never happened—one in which Otis Redding got played incessantly on country radio and raggedy-voiced country singers come with horn sections which can still break your heart. —Noah Berlatsky

Horse Lords is a Baltimore band that’s comprised of talented musicians from within the underground music community who you somehow never knew were in a band together. Aside from local buzz, I hadn’t actually heard their eponymous release on Ehse Records until I was floored by a live show. Their combination of tight Krautrock, jubilant Afro-beat-isms, and a guitar modified to produce scales I had never heard immediately sold me. The record holds up well to what I saw live, and I predict that this monster of a group will be gaining many new fans on their upcoming 2013 tours. —Miguel Sabogal

Drone has its place. Harsh wall noise does too, and I’m not about to hate on power electronics, gratuitous tape hiss, looped/masticated-centric exploration, sound art, or any of the other five dozen species of noise or semi-noise music moldering in the corners of slowly dying record stores and heaping merch tables at poorly-attended basement shows and crowding Bandcamp pages for extremist experimental imprints Rolling Stone and Paste will never, ever dare to fuck with. But for shoving a listener’s blood pressure into dangerous places and caps-locking the sensation of being alive and trembling and perhaps involuntarily embracing the present moment whole, nothing will trump the jerk, thump, and crunch inherent in industrial noise. This goes a ways towards explaining why I love This Town so much: it’s industrial noise melee du jour, an abrasive, uncomfortable bitch slap that’s constantly shape-shifting from one vengeful form of assault to another; just when you’re certain that you’re completely desensitized to whatever chain-rattling hysteria Kyle Kessler has midwifed into being, she’s already seguing into something uglier and less palatable. I mean, much respect to Swans, and The Seer, but that two-plus hours of full-band noise is a walk at the park compared to the wherefores This Town star tours in 18 barbed, cheek-on-asphalt minutes. Think you’re hard, pal? Try living through this. —Raymond Cummings

Forget about the guitar. For pure, undiluted musical versatility, the piano is where it’s at: the chicken of the musical kingdom, an underappreciated dietary staple that can be prepared in dozens of ways and still taste absolutely delicious, a prism through which myriad aspects of the human condition can be reflected. The Sontag Shogun approach is to shroud piano plaints—just really plaintive, penetrating melodies—in the achingly disorienting sepia-tones of judiciously deployed field recordings, electronic effects, oscillators, and an array of static sprays that range from mild to whistling. Absent Warrior, Abandoned Battlefield is deeply evocative, even nostalgic, aiming for maximum emotional impact with nary a lyric to be found anywhere. Go ahead, lend this NYC trio 26 minutes; they will wander away with a heart you didn’t even know you had and dash it into a million glittering shards. —Raymond Cummings

The moment I heard the first 10 minutes of Andy Stott’s latest record, Luxury Problems, I felt it was important. Its sonic formula of funereal atmospheres and organic-sounding techno furthers a narrative that feels closest in spirit to that of William Basinski's Disintegration Loops series. Explaining the alternating currents of gravitas and straight up mesmerizing that the man conjures feels inappropriate; instead, I insist that those not familiar with him head to the nearest loft or warehouse space and crank their bass amps to 12. —Miguel Sabogal

I wasn’t aware of Alexander Trust until this year. There’s something in his Heartbeat that defies immediate categorization within the various electronic music genres of 2012. Its rhythms have an organic lean, playing both with the space behind and in front of what might in the hands of other producers become distilled down to rigid 4/4 techno drum programming. The real star of this one, though, is the use of piano, employed throughout nearly every track in simple but memorable patterns that evoke Interpol as much as Aphex Twin. This one is definitely appropriate driving music, and a good stand-in for those moments when you don’t have your Boards of Canada albums handy. —Miguel Sabogal

1. Best Shock-rap Song For My Father-in-Law To Inadvertently Trigger on an iPhone and Bug Out Over its Effed-Up Video Treatment: Odd Future, “Rella.”

7. Worst Un-breakup: Chris Brown and Rihanna letting bygones be bygones because, hey, controversy and gristly train wrecks are oddly magnetic and these are the last days.

8. Most Regrettable Pleasure: Mystikal’s “Hit Me.”

1. Being the recipient of a one-year ban from entering Canada after attempting to cross the border to play a non-paying show at an Ethiopian restaurant in Toronto.

5. The promoter at a Kansas City club who insisted that I'd be a great opening act for a white emcee and an entourage that pulled up in Cadillacs outfitted with hydraulic lifts.

7. The re-introduction of impressionistic vocals into dance music a-la Grimes.

9. The prospect that Skrillex is in fact, as all media outlets have deemed him, the future of electronic dance music.

4. Most painful reminder that Husker Du are never, ever getting back together: Silver Age, Bob Mould.

5. Most bullshit reunion: At the Drive-In.