Rock and the New Man 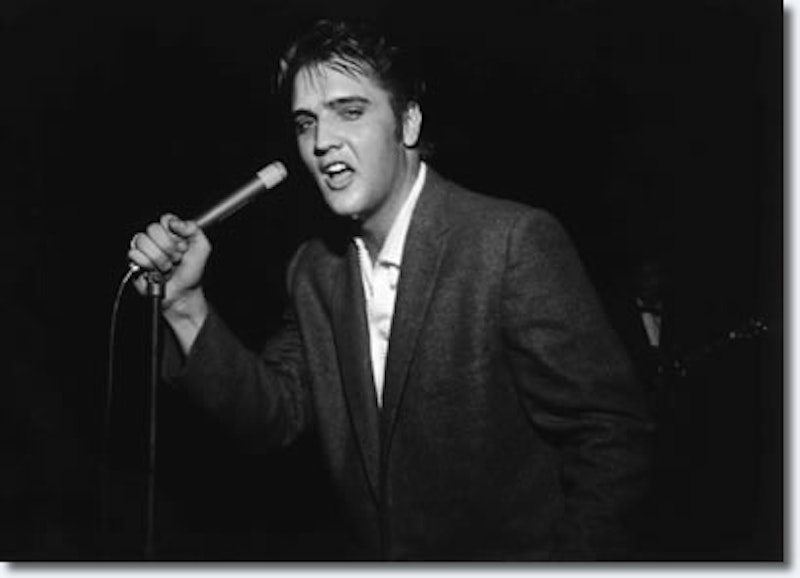 "If I could find a white man who had the Negro sound and the Negro feel I could make a billion dollars." Sam Phillips, who discovered Elvis, denies ever having said it, but the quote keeps getting repeated because, apocryphal or not, it resonates like truth. People like Jackie Wilson and Junior Parker and Mama Thornton were performing in Elvis' style before Elvis was. But they weren't white, and so they didn't have access to the same kind of mainstream success that Elvis did. The quote underlines the extent to which Elvis was a product not just of his own individual genius (which was considerable), but also of America's conflicted history of segregation and racism.

You could argue that Elvis' success is built on cultural theft, and many people have. But you could also argue that it's built on a particular kind of performance. That is, the excitement, the sexiness, and the thrill of Elvis isn't just that he's performing in a black idiom, but specifically that he was a white man performing in a black idiom. The charge wasn't just the styles being appropriated, but the appropriation itself.

The soul of rock is not its authenticity, precisely, but its fakeness. Elvis is edgy because he's adopting a persona that isn't his. His success/failure in passing for black is what makes him rock n' roll, and the failure is every bit as important to the mystique as the success. Similarly, middle-class Jewish Zimmerman is rock because he is pretending/failing-to-pretend to be an earthy Okie hillbilly. Mick Jagger's charisma is (was) a function of the fact that he is pretending/failing-to-pretend to be a working class American (of vacillating races), rather than the art school snob he is.

Elvis, Dylan and Jagger are all performing differences of race or class, but those performances are all also about gender. When Elvis wiggles his hips, or when John Lennon declares "You better run for your life if you can, little girl," they're not just pretending to be (respectively) sexy black performers or sexy American performers. They're also pretending to be men. The pretense of authenticity is also a pretense of manliness—of greater sexiness, swagger, violence, and danger. And, again, the fact that the pretense isn't perfect, that the façade is an aspiration and in part a failure, is an aspect of the excitement, not a negation of it. Rock gives you the chance to be someone you're not; to feel the giddy rush of swapping up for a better race, class, nationality and/or phallus. If the mask were too perfect, you'd think it was real, which would make it not sexy but stodgy, like parents who can't be bothered to put on a costume for Halloween. Thus, David Bowie's flirtations with androgyny (not to mention Elvis' flirtations with mascara) were a logical fulfillment of rock rather than a queer twist on it. The music was in part about the sexiness of mimicking a man; but it was also about the sexiness of mimicking a man.

All of which helps explain rock's decline, if not entirely as a commercial force, then at least as a libidinal, barbaric yawp. As Jonathan Bogart says

Rock has been undergoing something of an identity crisis in the past several decades. Its position as the dominant sound of youth culture has been usurped by hip-hop and dance music. Its reputation as the voice of rebellion has been co-opted by three generations of advertising and corporate culture. Its claims to righteous authenticity and working-class grittiness have been undermined by a multimillionaire celebrity culture and the rise of a blue-collar generation that's a lot less white and male than previous ones. It has only managed to retain any cultural capital in the world of indie rock, where its original vulgar aggression and sexual drive has been replaced by the kind of patient sensitivity, faithfulness to tradition, and self-conscious artistry that rock was once a reaction against.

Rock's edge is gone. And the edge that's gone is, I'd argue, not its truth, but its falseness. Rock hasn't lost itself; it’s found itself, which is worse. A performer like Jack White isn't pretending to be Howlin' Wolf or Woody Guthrie. He's pretending to be Led Zeppelin or Aerosmith. That can be entertaining, but it's not enough of a lie to be either dangerous or shocking or sexy. Instead, it ends up looking more like nostalgia. Decades of history mean that, as a rock star, White can only claim to be more or less the man he actually is, and where's the fun in that?

Which is why, as Bogart says, Ke$ha, despite her dance-pop roots, is able to pull off the rock-star pretense in a way White can only dream of. That is, she's able to pull it off precisely because it is a pretense. Ke$ha, because she's dance-pop, and even more because she's a woman, has a distance from the (mostly) male history of rock.

And that makes her appropriation of that style—like Elvis' appropriation of black styles—sexy, daring, irritating, and charged. When on "Dirty Love" she shouts at Iggy Pop, "You're not my daddy/baby I'm full grown," the gleeful lasciviousness is in the brazenness of the disavowal. Iggy is her daddy; she's lifting his attitude, his moves, and his mojo.

And yet, as the insanely catchy bubble-gum chorus charges ahead, she nasally insists that she's not imitating the man, but is instead inside his pants. The flirtatious byplay isn't just skeevily intergenerational; it's incestuous and cross-dressed, inasmuch as Ke$ha is adopting Iggy's masculinity in the interest of getting it on with herself, or himself, or whichever self it may be. It's not convincing; Ke$ha is a far cry from the Stooges, just as Iggy was a far cry from the blues. But the distance is the point, which is why, these days, it takes a woman to rock like a real (i.e. fake; i.e. real) man.