The Greatest Hippie Song Ever

Gotta go with Arlo Guthrie (and not “Alice’s Restaurant”). 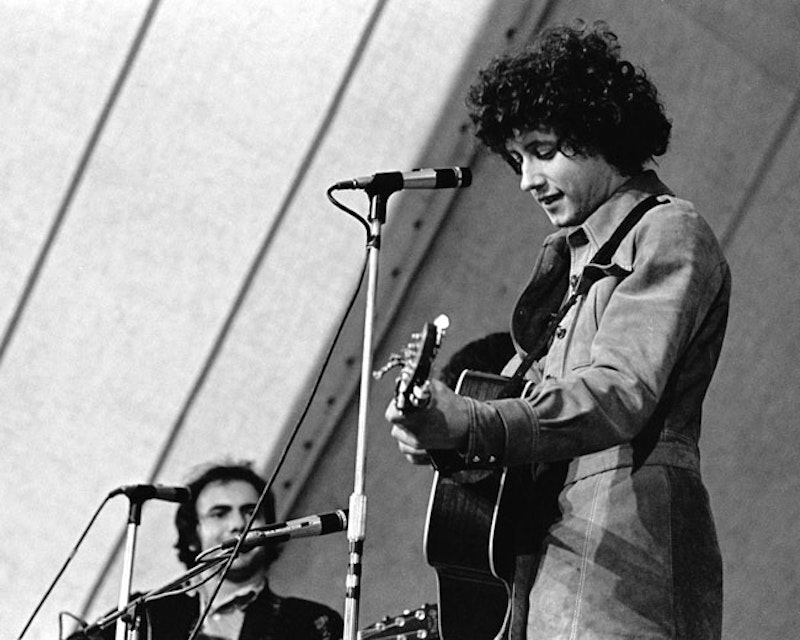 By the time I got to Woodstock, it was already over. Actually, no, I was 14 in 1969, and though my parents were permissive, traipsing off to a three-day concert in upstate New York (from Suffolk County) wasn’t in the cards. One of my older brothers tried to buy a ticket, but the festival was sold out: little did anyone know the fences would collapse and to great jubilation—and warnings of bad brown acid, mudslides, and Wavy Gravy’s sort of coherent speeches—it’d become a free event. But of course the following year I saw the movie, bought the triple album, and even though Altamont later in ’69 had snuffed out a lot of the good vibes, I enjoyed both immensely. And then promptly forgot all about the whole affair.

Don’t know why, but about six months ago I purchased the Woodstock double-CD, and was surprised that held up pretty well, Joan Baez’s rambling about hunger strikes in a California prison notwithstanding. The highlight is Arlo Guthrie’s buoyant “Coming Into Los Angeles,” from his ’69 LP Running Down the Road, which, unlike some of the ragged performances (Crosby, Stills, Nash & Young the prime offenders), was a less polished but more spirited take than the studio version. Arlo, naturally, was an exceptionally cool cat, and at 22 had already embedded himself into the counterculture pantheon with his song (and film) “Alice’s Restaurant.” Not too much after that—aside from his haunting cover of Steve Goodman’s “City of New Orleans”—as he wasn’t much of a writer and soon faded into the jumble of Pete Seger disciples who sang at demonstrations for whatever the cause of the day was. He’s still at it, a graybeard with a flock of kids and longtime wife, now 67, luckily dodging his father Woody’s genetic Huntington’s disease, which cashed him out at 55.

Anyway, it got me thinking about all the flower-power hippie songs—some great, more that were really dippy—from that era and I don’t think there’s a better representative than “Coming Into Los Angeles.” A matter of preference, obviously: you could say “Everyday People,” “I Got A Line On You,” “Walk Away, Renee,” “California Dreaming,” “Strawberry Fields,” “Love Street” (one of the Doors’ most underrated songs) or Donovan’s ghostly “Sunny Goodge Street” and I wouldn’t quarrel. Bring up Iron Butterfly, America, Cat Stevens, the Eagles, Loggins & Messina or Carole King and we’ll promptly end the discussion.

But I stand with Arlo Guthrie on this very vital sociological exercise.

Some of the song’s lyrics: “Coming into London from over the pole/Flyin’ in a big airliner/Chickens flyin’ everywhere around the plane/Could we ever feel much finer?/Comin’ into Los Angeles/Bringin’ in a couple of keys/Don’t touch my bag if you please, Mister Customs Man.”

I’m not sure today’s kids—“hipsters,” a word like “awesome” that now means nothing at all—would intuitively understand the slang, but then I’ve no idea why all the odes about alienation in succeeding decades were popular.

Arlo continues: “There’s a guy with a ticket to Mexico/No, he couldn’t look much stranger/Walkin’ in the hall with his things and all/Smilin’, said he was the Lone Ranger/Hip woman walkin’ on the movin’ floor/Trippin’ on the escalator/There’s a man in the line and she’s blowin’ his mind/Thinkin’ that he’s already made her.”

I wondered at the time if Guthrie was hinting that the “hip woman” and guy would get together and be found balling in the men’s room, not caring who saw. Unless it was the fuzz—the pigs, man.

As noted above, Arlo Guthrie wasn’t much of a songwriter, but “Coming Into Los Angeles” captured the ethos of that period so precisely—who didn’t want to be the Lone Ranger, with Tonto by your side?—that it’s a time-capsule piece. You smile on your brother and try to love one another; I’ll take Guthrie’s paranoid mad dash on an airplane with chickens flyin’ every time.