Mom at a Concert

Iggy Azalea in Baltimore with my tween. 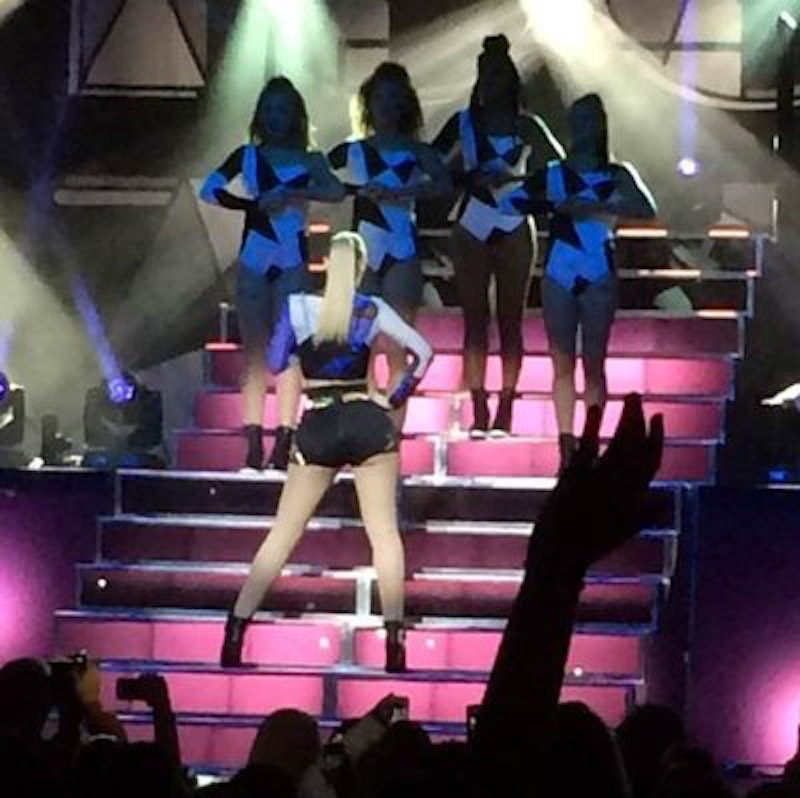 The last time I went to a concert was Def Leppard at the Borgata in Atlantic City in 2008, and the time before that was probably Steve Miller Band in the 1990s. I don’t get out much. So the other day I was text-chatting with sea glass friends and bemoaning the fact that I tried and failed to get tickets to the sold-out Iggy Azalea concert that evening. Serendipity being what it is, my friend said she had a friend on the sound crew for Azalea and an hour later I had kidnapped my 12-year-old daughter from ecology club, video-recorded her shocked reaction and whisked her away to Pier Six Pavilion on the waterfront in Baltimore; what a fantastic venue.

It was like landing on another planet. I like the 24-year-old (born Amethyst Amelia Kelly), her music and her perfectly-sculpted-ass dance moves, so I was thrilled to go. The concert was entertaining even for a mom—high energy, talented dancers, Iggy sounded perfect and the crowd loved her for all 50 minutes she was onstage. But the people-watching was probably my favorite part.

I felt like my age had somehow instantly escalated from 45 to 65. Most of the spectators were old enough to transport themselves to the concert but were still young enough to be my child. My two older teen girls wouldn’t be caught dead in many of these outfits, though. There was a sea of tight-fitting tribal print leggings. The girls I thought looked cute wore short-but-not-too-short A-line skirts with Converse or Vans sneakers and cute tops. My daughter pointed out these outfits, explaining that they were “the reason we need to go shopping more.” Win: she’s not asking for skin-tight tribal leggings.

Then there was that girl. I don’t go to enough concerts to know for sure, but I remember from the Def Leppard concert and can only assume that each concert has that one girl who is dressed outlandishly; so over-the-top that you have to make yourself look away from the fashion “pay attention to me” train wreck. This woman was also far too old for the outfit; she looked 50 give or take five or 10 years of sun damage to the face. She wore what I guess was a skirt the size of an ace bandage made of some type of gold lame, a gold sequined bra-thing, fishnet stockings and stripper heels. Now I’m not judging, because it’s entirely possible she was on the way to her job on the pole immediately following the concert with no time to change in-between and besides, Azalea’s first big hit “Work” would argue there’s nothing wrong with that.

“Pledge allegiance to the struggle.”—Iggy Azalea, “Work,” The New Classic.

I love Azalea. I don’t care about the negative crap people have said about her because I love her underdog, rags-to-riches vibe and screw-the-haters-PEACE attitude. I think her music is fun, edgy, sexy and unique.

At the concert, besides the people who could drive themselves, there were those who could not, aka the tweens attending with parents. I wasn’t sure whether I was supposed to make eye contact with other parents, many of whom sat on their phones and waited the concert out as they would any common sports practice, just passing time until the next chauffer duty cue. I know that feeling, but for this, I was on my feet dancing the whole time because the DJ who played for the first hour of the show before Azalea came onstage had a mix full of old school jams. At one point, I turned to the older teens next to me who were talking about going to the bathroom but were afraid to leave their seats.

They seemed relieved to see a mom figure (embarrassingly dressed as I was in skinny jeans and a daughter’s old pair of Uggs—an outfit that felt totally so five minutes ago).

One of these fortunately un-trashy girls turned to me and said, “You’re a cool concert mom, having fun dancing with your kid. I’ve seen moms at these concerts who bring lawn chairs and sit over there on the side and read a book.”

I’m lucky my kid isn’t the kind who’s embarrassed by her mom; we just had fun together. The last-minute concert plans earned me a so-fancy “best mom ever” nod and we don’t get many of those, so I’ll take it.