The Future Ambassadors of Punk 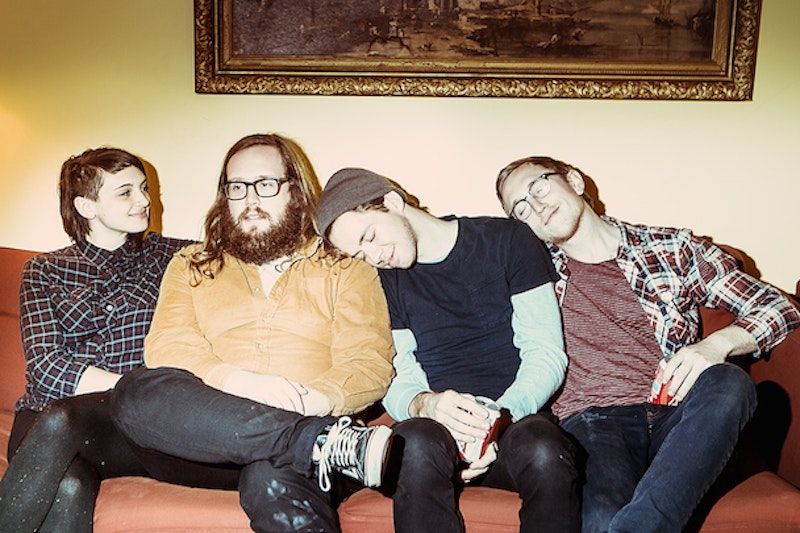 iTunes has never been good with genres. Oneohtrix Point Never is dance, Courtney Barnett is miscellaneous (?), every other band is indie rock, and c’mon, chillwave isn’t even an option. Brooklyn pop-punkers Chumped, of course, are alternative. As Juno MacGuff would precociously quip, “Alternative to what?”

But Wednesday night at Baltimore’s Metro Gallery I learned that they might not be so easy to classify. For me, they fit firmly as pop-punk revivalists with emo leanings—think Joyce Manor or Toys That Kill—albeit with many songs that stretch past the traditional two-minute mark. The clean, crisp production of their self-titled EP and debut LP, Teenage Retirement, was the least appealing aspect of those records—I would’ve liked something messier, similar to how Bully scuffed up their shiny sound for Feels Like. But live, band leader Anika Pyle went full on grunge. She wailed through “December is the Longest Month” and “Name That Thing,” backed by crunchy guitars and frantic drums. The set went increasingly faster: four-minute songs became two-minute songs, two-minute songs lasted 45 seconds; they blasted through their set, not with a let’s get this over with sort of vibe (a la Speedy Ortiz), but with anger and resilience and I need to get this full-blown Shakespearean catharsis out of me before I explode kind of energy.

Chumped is the sort of band that will surprise you with their fanbase. They’re literate enough to hook the music critics, punk enough to sway the purists, nostalgic enough to attract an older crowd, and poppy enough to lure in the tweens. In fact, I’d be surprised if “Anywhere But Here” isn’t banging through some Hot Topic PA system right now. Chumped’s mall-ready choruses aren’t a deterrent, though. I wish I’d discovered a band like this while I was still shopping for Green Day steam-on patches to legitimize my Green Day t-shirts on the Towson Mall’s bottom floor. Chumped is a gateway: they’re going to inspire obsessive fans and introduce a lot of kids to punk. If that means just one less All Time Low tweenybobber, they’ve done their job.

Wednesday’s night’s show evidenced this democratic fanbase—I bothered my friend Alex with frequent interjections of “Look, a 12-year-old!”; “Look, a lumbersexual!”; “Look, Ian Cohen!” A cool middle-aged couple—hold overs from the 80s underground scene, I’m thinking, judging from their matching Butthole Surfers t-shirts—cut a rug in front of us, the dude rocking a strange beret-headband combination, mouthing every single lyric in unison with Pyle.

Those lyrics—most of which are imbued with Bloc Party’s Silent Alarm-era we’re gonna win this attitude—would be tougher to get behind without Pyle’s intense, passionate delivery. “Take me anywhere but here” or “In a town where everybody stays/cause no one has the will to change” read as clichéd on paper, but come across as entirely genuine on record.

That’s the other thing: this is a positive band—they don’t critique, they encourage; they don’t sulk, they mobilize. When Pyle sings “We’re all in this together,” she’s not trying to appeal to a large pop audience, or robotically keeping a filler lyric, she means it. Anika Pyle is a force of nature, and the future ambassador of contemporary punk.