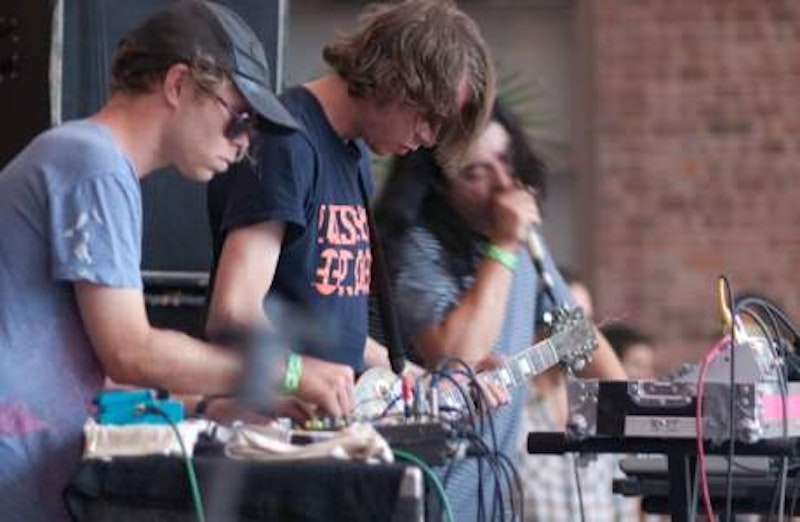 Eric Copeland, Bjorn Copeland, and Aaron Warren, a.k.a. noise nobles Black Dice are back from the cantina to offer us another whippet of madness, their sixth LP and first for Ribbon Music, Mr. Impossible. Despite the title it’s the least bizarre and curiously confounding album of their career—the junky and baggy AM radio grooves of Repo are gone in favor of Load Blown’s concision and bright sonic punch. But unlike the latter, Mr. Impossible’s dry, unaffected stock drum machine rhythms and stabs make this the first BD record that’ll get more people dancing then going outside to smoke (seriously, when the Bobby’s-First-Beat thromp of “Brunswick Sludge” kicks in, it’s like Warren and the Copeland brothers are channeling an Aleisis demonstration video—for whatever reason). The elements you’ve come to expect—wah-drenched, drunk, naïve guitar licks, off kilter drifts, a disdain for quantizing, vocals and samples mangled and molested beyond all recognition into something both gross and tuneful—are here, present, cleaned up, consolidated, and ready for work. Nevertheless, no one would ever hire Mr. Impossible. Who takes acid before a job interview anyway?

Black Dice records are never this clear cut. I’ve been a fan from the moment I heard the brilliant “Manoman” in 2006 (mislabeled “Monoman” on my copy), a precursor 12” single to the Load Blown album that came with this great poster by Bjorn of a zebra with human eyes and mouth ensconced in a mess of colorful psychedelic tendrils. I’ll keep that poster up on the wall, prominently, wherever I live until one of us is gone. The visual art of Mr. Impossible (like most of the Copeland’s stuff, collage based and totally arresting, equally terror-inducing and boorishly funny, it makes everyone else look like they’re not trying at all. No other band has as strong a connection between their music and album artwork). But even though their liners are consistently first tier and an absolute additive to the music, their records tend to be overlong, undisciplined, or simply boring in stretches. Mr. Impossible grasps all that is holy about BD and squeezes out some delicious concentrate.

Just wait for “Pinball Wizard” to start making its way onto some weird high school mixtapes; “Rodriguez” is gloriously schizo, and when that busy beat kicks in it will make you want to flail about like an idiot; and “Carnitas” starts out as bloated tropicalia, rife with belchy horns and soft keyboards, only to rev up into locked-in hypnotic bliss, only to come down with a seasick, sun-bleached beach rock loop (if that sounds too much like Real Estate, drink some bleach and then reassess your opinion). It’s the longest song here and sums up everything Mr. Impossible is about: it’s a party record with downs syndrome; the sound inside a dancefloor chauvinist with a belly full of peyote. The difference in clarity between the almost satirically unaffected drum loops and the rest of the band’s decomposing sonic soup is the most jarring part of Mr. Impossible, as if the title is one big joke on the nature of the band itself.

If you’re already a fan you’ve naturally checked out some of Eric Copeland’s solo stuff, a canon in itself that’s rapidly outpacing Black Dice by several releases a year (since 2009 he’s released six 7” singles and three albums, all of them stellar). His songs are from the same planet but they’re loaded with pathos and a really wounded emotional sincerity, as if the formerly humanoid fleshy blob that is his main gig gained sentience and empathy—songs like “Auto Dimmer,” “Green Burrito,” Side A of Strange Days, and the brand new “Tarzan and the Dizzy Devils” might make you cry. The profound emotional resonance in Copeland’s work is what makes it my preference, but Black Dice are what they are, and that’s really funny and fun. Don’t take them for granted. Mr. Impossible might be their best record yet.