The Consolers and Their God 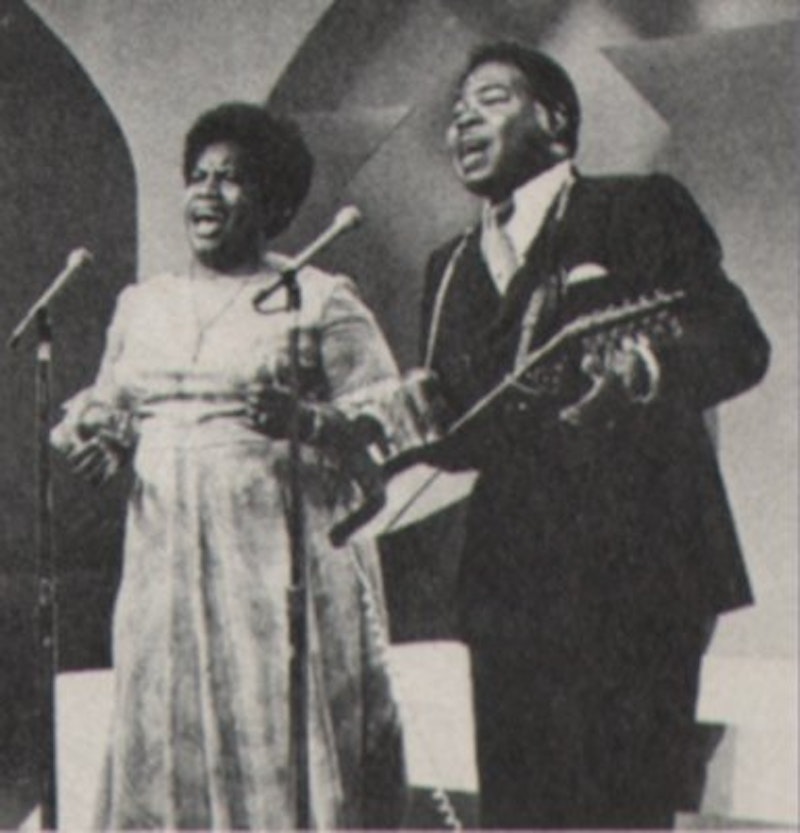 Sullivan Pugh died last year. His wife, Iola Pugh, died 17 years earlier, in 1994. Probably nobody reading this has any idea who they were.

Lots of musical subcultures, from punk to alt country to underground hip-hop, pride themselves on their obscurity vis-à-vis the mainstream. But few scenes have as distant a relation to celebrity as gospel. Sullivan and Iola Pugh, a duo from Florida who performed under the name The Consolers, sang classic gospel beginning in the 1950s, and are widely considered greats in the genre. But that "widely" is incredibly narrow. The Consolers were similar in many respects to the slightly later Staple Singers—a mixed gender group with surging quartet dynamics and soulful bluesy guitar. But the Staple Singers courted the mainstream with crossover, uplifting-but-not-quite-Christian fare. The Consolers kept it real, which in gospel, means keeping it largely anonymous. Even the Internet hardly knows them. They don't have a Wikipedia page, and their catalog is a mess. Amazon has a handful of albums, none of which have anything like complete, or even partial, annotations. Some seem to be from the 80s, well after the Consolers' classic period. One is a Best Of; others may be collections. It's impossible to tell.

The album I have is similarly mysterious. Thank You, Lord, is a nine-song, 24-minute selection of songs from 1994, though since that was the year Iola died, it almost certainly wasn't recorded then. When it was recorded, who knows; the Consolers didn't do stylistic change, and the music here sounds like it could have been performed during any time in their four-decade career.

Not knowing when, though, doesn't detract from enjoying the album. On the contrary, in these days where all information about all music is only a search engine away, it's kind of refreshing to hear Sullivan and Iola belt out their tunes sans chronology or context.

Indeed, to some extent, the album calls for that kind of sparseness. The songs all follow the same minimal format—a mid-tempo organ sets the pace, the guitar provides a touch of color around the edges, and then Sullivan and Iola trade lines, building off each other, shouting encouragement, and sometimes joining in gruff harmonies. Iola's power is greater, and Sullivan's voice is rougher, but both are deep and textured; they voices don't contrast so much as they fit together.

Again, there's no way to know whether this is a collection or an original recording, nor to what extent, if any, the Pughs were involved in the sequencing of the album. It hardly matters, though. One song strides forthrightly into the next, tapping the same groove and the same soul. At times, as on the transition from "Thank You, Lord," to "He Will Deliver Me," the consecutive tracks end up feeling more like one song than two; there's the same pace, virtually the same tune, and the same message.

That message is salvation. The Consolers' music can feel empty in some ways, but that's not because they're despairing. It's because they're pointing up and out, from absence to presence. They may be nobodies making music with almost no one listening, but they've still got one to whom to testify. On "What a God We Serve," Iola almost yodels, a vibrating quaver, as Sullivan shouts encouragement. "What did Ezekiel say about him?" she says, and he responds, "What a mighty God! What a mighty God!" Paul said the same thing, Iola shouts, and so did John, and so, here, do Sullivan and Iola, almost as if what is said, or sung, is more important than the ones who say it, and as if the voices rising one on top of another matter more than if you know their names.