On Preflyte Plus, a new collection of early demos and bootlegs. 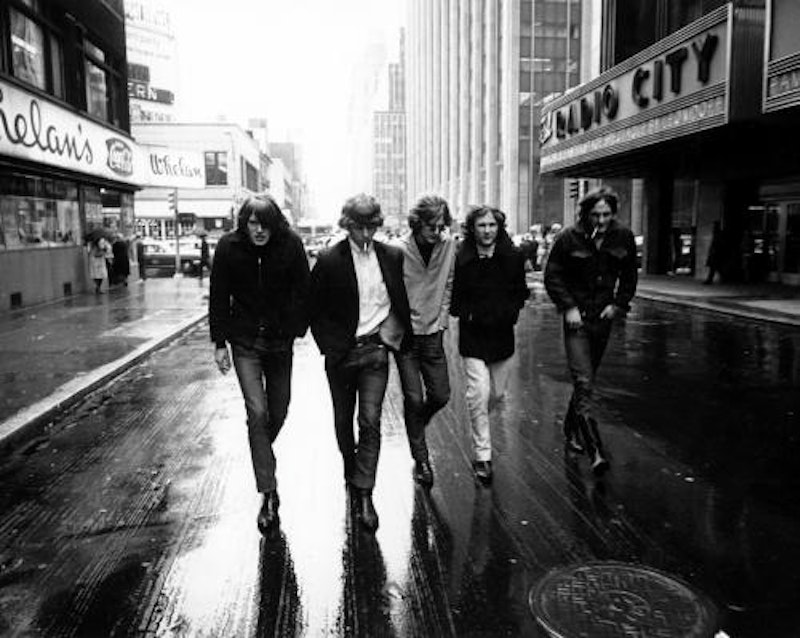 In the nearly 50 years since pioneering L.A. folk rockers The Byrds formed and first recorded, their vast influence on music and culture has made them mythic champions of the classic rock-era. Unlike many iconic artists of the 1960s and 70s, The Byrds have never commanded a legion of obvious copycats. Instead, their power to affect other artists is much like the power of their songwriting—it is defined by a sophisticatedly nuance, a concept reflected not in what other musicians have been playing, but in how bands and artists have created music since the 60s. The Byrds’ most obvious current proponents are rootsy Americana artists like Band Of Horses, Deertick, and others who combine the high lonesome moan of early U.S. folk with the muscular drive of electrified rock. Consequently, the fact that The Byrds’ conceptually progressive music and identity emerged pretty much fully matured at birth seems nothing less than uncanny in its greatness.

It is the collective presence of their folk-rock majesty's initial incarnation that has been summoned by the latest reissue of Byrds demos and early recordings entitled Preflyte Plus. The pre-hit music of The Byrds has been found throughout the past four decades in the form of shoddy bootlegs, a few legit reissues, and everything in between. With Preflyte Plus, the Floating World label finally gives the legacy of the early Byrds' work a chance to be heard on a two c.d. set that presents this music in both high quality sound and within its proper context, though ironically as an archival document there have probably been better annotated reissues than this one.

Before they were called The Byrds, former folkies Jim (later known as Roger) McGuinn, David Crosby, and Gene Clark were alternately known as The Jet Set and The Beefeaters when they cut the demo recordings that make up the majority of Preflyte Plus. The goofy early 60s photos included here show the trio of folk scene ex-pats looking (by Beatle-era standards) thoroughly un-rock & roll, like a bunch of preppy collegiate types in button-down white shirts and short haircuts wielding acoustic guitars as if a hootenanny could break out at any moment. Regardless of their innocuous appearance, The Byrds’ sophisticated mesh of folk and rock was certainly as high-powered as ever when these 1963/64 recordings were made, though some of the acoustic demos of later Byrds material are dominated here by a hammy troubadour-type delivery similar to that of The Kingston Trio or Gene Clark's former band The New Christy Minstrels. Those vocal histrionics are most noticeable on the acoustic takes of “You Won't Have To Cry” and “Tomorrow Is A Long Ways Away” and a few others. Corny as the singing may be, these particular tunes possess a unique glow of naive Kennedy-era charm that would be lost in the textured layers of their soon-to-be jangling electrification.

Other Preflyte Plus songs benefit from an earthier acoustic delivery in an entirely different way: future album cuts like “I Knew I'd Want You” and even an early version their Top 10 cover of “Mr. Tambourine Man' evoke the most tranquil side of Donovan or Nick Drake. Towards the end of disc two, a spare solo acoustic demo of David Crosby's “Everybody's Been Burned”(made famous via a psychy proto-jazz rock version on the later Byrds album Younger Than Yesterday) shares that dreamy laidback atmosphere.

What will really surprise those unaware of the early Byrds repertoire is how many of these songs rock out with the kind of wreckless abandon that many young 60s garage combos would epitomize later in the decade. You could blame this on the fact that McGuinn and co. was barely accustomed to the tropes of rock music at the time of these sessions. Their biggest rock influence then was the early Beatles, and this is undeniably apparent in the chirpy exuberance of tracks like “Please Let Me Love You” and the raucous “You Movin’ (II).” Yet thanks to McGuinn's trademark 12-string guitar chime, even these bubbly teenbeat movers sparkle with a folk balladeer's mystic sense of romanticism that The Beatles would only vaguely replicate a few years later on albums like Help and Rubber Soul. Certainly not Beatle-esque would be the hardest rocking track here: the original acoustic version of “You Showed Me.” Sonically far removed from the later orchestral version that would be a late-60s hit for The Turtles, it may even qualify as the first folk-punk song ever with its painfully rasping vocal refrain and choppy rhythm combining in a lush melody both bittersweet and forebodingly aggressive.

The "Plus" in Preflyte Plus comes from one spellbinding reel of tape on which many of the songs just mentioned were originally stored: a Columbia Records demo that prior to this release had never been publicly issued in any form. Of all the material discovered on this tape, it's Gene Clark's solo demo “She's The Kind Of Girl” that stands as the most amazing piece in this collection. The song has a sound 10 years ahead of its time in that it presents Clark in full-on world weary singer/songwriter mode, lyrically exploring the dark lows and euphoric highs of love with intense care in a melody as tragic as it is amorous. Tunes like Big Star's “13” or Joni Mitchell's “Circle Game” would provide plenty of close company for “She's The Kind Of Girl” in the realm of legendary tear-jerkers.

Even though Preflyte Plus cannot be topped musically in terms of its early Byrds selection, some of the packaging here is a little less than impressive. The liner notes are riddled with grammatical errors, there is a strange lack of individual songwriting credits (despite the fact that Preflyte Plus is not a bootleg release), and most confusing of all, even though it often appears for sale in catalogs under the title "Preflyte Plus" the word “Plus” cannot be found anywhere on its cover. On the upside layout-wise, there are plenty of great photos in the booklet here, and the front cover is a visual feast due to its photographic motif—one that's hilariously inappropriate for The Byrds. In terms of scholarly documentation, this release really would've benefited from an attention to detail being equally paid to both its design and music elements.

Nonetheless, this is an essential item for either diehard Byrds completists or anyone new to the sound of traditional U.S. folk music and electric rock in spectacular collision.