A convesation with People of the North guitarist/organist Bobby Matador. 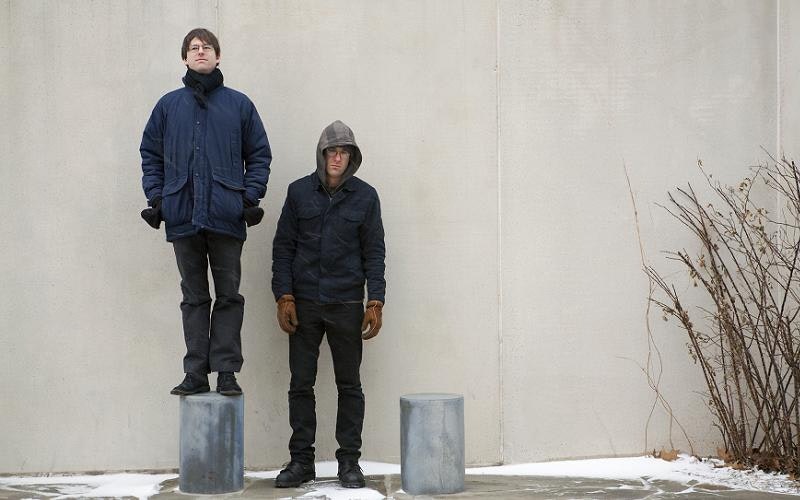 You want long, mind-bending Krautrock jams? Check Deep Tissue. Want tremulously abstract explorations that seem to stretch for weeks? Check Steep Formations. These two albums comprise the discography of drummer Kid Millions and guitar/organist Bobby Matador—two fifths of NYC avant-everything-and-change outfit Oneida who moonlight, very satisfyingly, as People of the North. Since its February release, Formations has been in constant rotation on my iPhone, scratching that awkward and difficult-to-reach itch most experimental music can’t quite satisfying: occupying that uneasy space between tangibility and diffuseness, commanding attention without placing it in a vice-grip. Formations isn’t noise, exactly, or drone, or anything extreme, but it definitely slakes a thirst. Why Brah Records hasn’t posted a YouTube clip of any tracks from this record is beyond me.

I emailed Bobby Matador to learn a bit more about the band and how it came to be.

SPLICE TODAY: What inspired "People of the North," as a band name, and what led you to start this project?

BOBBY MATADOR: The band is named after an Oneida song that first appeared on our 2001 album Anthem of the Moon. We applied the name to ourselves as a duo a couple years after that, when Hanoi Jane—the third member of Oneida—was unable to play for a while. We worked on new songs/material/styles of playing, and played a bunch of shows.

We toured out to the west coast, where Jane eventually joined us and we morphed into Oneida again. I think this might have been 2003. Since then Kid and I have played under the name off and on, working out material with and without the other members of Oneida. I think maybe it's a way for us to be a little more relentless in our approaches to music, aesthetics, and ideas: like two people starting a conversation in which others are welcome, as opposed to the freer round table of Oneida. It seems to be something we just follow by instinct. I’m not sure if Kid would put it differently.

KID MILLIONS: I think I can chime in too now. We started the band so we could keep playing during a time when Jane wasn't available. I think we started it in about 2002. At the time we had some offers to play some shows as Oneida but couldn't, so we started People of the North. We wrote a bunch of new songs during that period; most of them ended up on [Oneida albums] The Wedding and Happy New Year. Basically it’s another opportunity for Bobby and I to work in a collaborative environment. We really just enjoy stripping things down to their essentials. Although it’s become the same for Oneida, there are really no rules with People of the North. It’s becoming way more improvisational now.

ST: How did Deep Tissue take shape? That album would seem to have had a considerable incubation period.

BM: The album was actually recorded in a fairly brief period of time at our studio, the Ocropolis. Kid and I spent several sessions playing together, working on ideas intermittently with Shahin from Oneida; at one point we realized that we were creating a pretty tight distillation of what People of the North was for us at that point. We had written a ton of stuff as PoTN before, and that material had usually folded itself into Oneida seamlessly, as the group absorbed and adapted those songs. (Some examples: "Lavender", which is on The Wedding, and "Up with People" from Happy New Year).

As an organization, we tend to work in a pretty freewheeling style, making music and then concerning ourselves with how to categorize it—and this time we just had a sense that this music was complete, and stood a little bit apart from what Oneida was working on at that point (our "Thank Your Parents" project), so we felt comfortable defining it as a definitive People of the North statement. So we finished with that target in mind, and released Deep Tissue as the first PoTN full-length.

ST: Let's talk a bit about Steep Formations, and that album's beginnings. Where Deep Tissue seemed more on the raucous Krautrock end of things, the follow-up feels more "noise” to my ears.

BM: I think that's true, at least from an external viewpoint or the "consumer end,” but it's not necessarily the result of a conscious choice. I would identify the shift in dynamics and rhythm-emphasis as a natural product of intensive playing (rehearsal and performance) in both improvisational and compositional modes. This growth has been definitively shaped by Oneida's extended "Ocropolis" performances over the last few years. We have performed in collaborative environments for ten hours at a stretch, improvising continuously, and there has been an alteration of musical consciousness as a result.

It's hard to quantify or verbalize the extent or meaning of these experiences. The music on Steep Formations is an expression of that altered consciousness toward music; I believe that our current M.O. probably has much in common with various noise music and a variety of minimalist and automatic approaches to composition, documentation and performance—and we've acknowledged as much in some interviews and publicity materials—but it would be misleading to characterize this album as intentionally "noise.”

ST: What are those marathon performances like for you guys, mentally and physiologically? Is there some degree of uplift and transcendence? Are you absolutely wiped out afterwards? Do you listen back to what was created and think, "I can't believe we did that" or find that the finished product sounded notably different than it seemed to when you were performing it?

BM: Really all of the above—massive transcendence, frustration, ego destruction, exhaustion, ecstasy—except that I've found it hard to revisit the experience by listening to the recordings, so I can't comment on the reflection element. We have made good, monitored multi-track recordings of all of the Ocropolis performances, but have yet to feel that it's time to revisit them in any studied way. I do a huge amount of close listening to work that we record in the studio, and while I find it an exhausting process, it's also rewarding in how it directs us toward the eventual production of a record, as well as how I personally find myself directed as a player. But the Ocropolis performances are a different animal, and while I relish the thought of wading into those recordings someday, it's not yet time. I feel as though when I do that, I'll lose the ability to participate with complete freedom, and I'm not ready to lose the nakedness of that experience.

ST: It's amazing what time can accomplish. Sometimes I return to articles I remember feeling negative or indifferent about when I wrote them, and I find something valuable there; and then when I re-read something I wrote that I remember being proud of, I just see the flaws.

BM: I've been pretty good at not obsessing over flaws in retrospect, although I definitely know what you mean. I think of those issues as just artifacts of a limited, temporally linear awareness, and am pretty good at dismissing those concerns as artificial or meaningless; but where I find I can get hung up is when I'm in the act of actually making music, especially in a context as extreme and transportive as an Ocropolis set. It's important to experience the music as free of self-consciousness as possible; any additional baggage of consideration or reflection in the moment would be too much to bear, I feel. Although I can't swear to it, as I've done a decent job of armoring myself against that.

ST: Collectively, separately, and as part of other groups, the two of you create and release what most would consider a staggering amount of music. Do you ever find yourselves tired of music, or at least needing an extended break from it?

BM: I can only answer this on a fundamentally personal level. I've found myself taking enforced breaks from music from time to time—a couple weeks without playing, or a couple months without a show, due to life complications—and there's a disorientation that results which is unpredictably balanced between healthy and inspirational on one side (I find my appetite for making new stuff ravenous when I return), and mindfuckingly horrible and impossible to handle on the other.

Anyone who's experienced the insidious way that episodes of depression, for example, can choke away your will before you know what's happening can probably relate. It's like life feels totally worthless when I'm not playing, even though I have so much amazing shit going on beyond music, but it's really hard for me to put 2 and 2 together effectively to realize why I feel so shitty, or even to muster the self-awareness that I am miserable. So you know, I make as much music as I can. I file that need under “observance” at the moment.