Whatever Aphrodite is, at least Minogue isn't trying to be someone she's not. 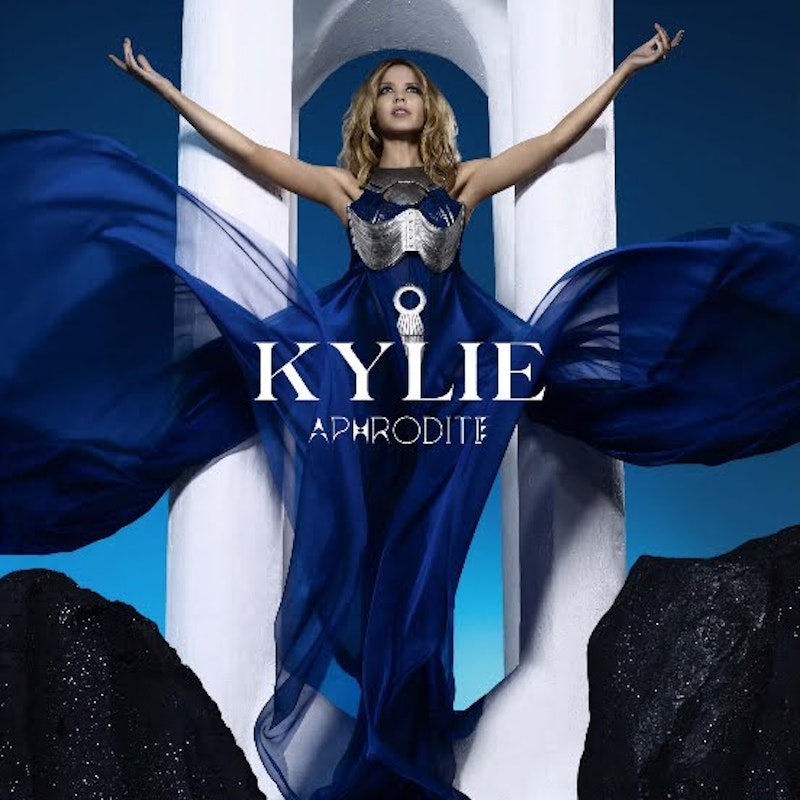 “Dance!” Kylie Minogue sings in her breathy little girl throb. It’s the first word of “All the Lovers,” the first track on her new album Aphrodite. Things don’t get any less predictable from there, as the song declares that it wants to dance and it’s on fire and all the lovers can’t compare to you while the music sweeps into Broadway-inflected Europop, and multi-tracked choruses of Kylie winsomely emote in front of walls of sugary glop that would send Phil Spector into insulin shock.

There are other songs on the album to —I can tell because they’re listed right there on my iTunes. No matter how many times I listen to the thing, though, it’s hard to concentrate long enough to separate one track from another. Sure, I can find differences if I really try. “Put Your Hands Up (If You Feel Love)” is even more overdriven than the rest of the album, I guess, and it has echo effects; Minogue mugs more assiduously than she usually does on the opening vocals for “Cupid Boy.” But really the whole thing just slides across your brain like an undulating river of corn syrup. Processed pap clings to the crevices in your gray matter with pallid treacly hook after pallid treacly hook…until it all evaporates completely into ephemera. This is an album that really makes you appreciate the weightiness of, say, ABBA, a band that took its work seriously enough to procure actual dumb lyrics and actual melodies that would get stuck in your head for weeks, if not decades. Aphrodite, on the other hand, eschews pop craft for remorselessly chipper thumping.

So I hate it, right? Well, not exactly. This album is not good, but I don’t resent its existence. In part, that’s because of the resolute lack of pretension; Aphrodite is rote, but it isn’t going for anything but rote. Kylie isn’t trying to share her pain like Keyshia Cole; she’s not trying to be edgy like Lady Gaga; honestly, she doesn’t even seem like she’s trying to be sexy. You wouldn’t think you could declare, “I am Aphrodite!” without some concupiscent intent, but Minogue pulls it off through sheer plastic anonymity. This is the goddess of love as showgirl Barbie.

It’s odd, but what Aphrodite most reminds me of isn’t the work of Minogue’s pop diva peers, but folk music, or blues. Not that Kylie’s influenced by those genres at all…but there is an embrace of predictability which feels like it should be on the festival circuit. While listening to Aphrodite and desperately trying to keep yourself from falling asleep, you can maybe imagine an alternate universe, in which disco grew up in Delta shanties rather than urban dance floors, R. Crumb provided loving, earthy cover art for Europop reissues, and Alan Lomax made extensive field recordings of Boris Midney and Patrick Adams. That’s a world in which this album would make sense; in which it could be a fill-in-the-form genre entry by an aging practitioner with nothing to prove, doing her thing because that’s what she does and why shouldn’t that be good enough?