Mad at the Ceiling 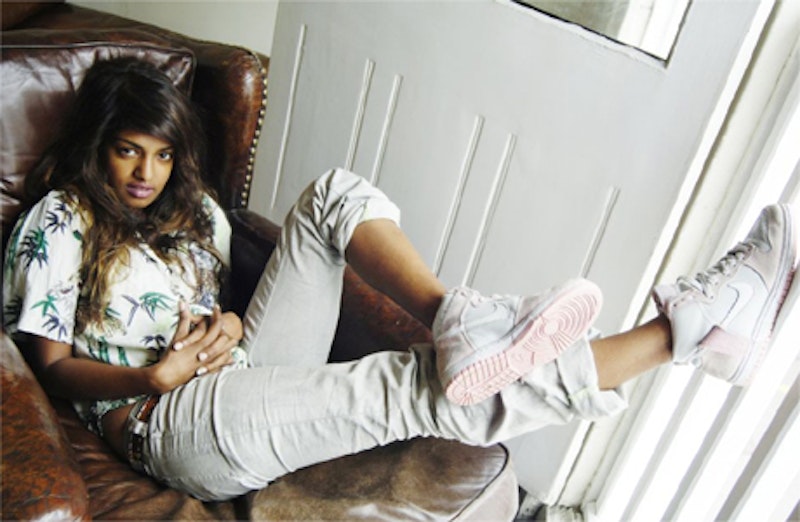 “All I ever wanted was my story to be told,” Maya Arulpragasm sings on her third LP, /\/\/\Y/\. She starts by mutilating the idea of self-titling into a bunch of slashes that elude a Google search, although after a few seconds into the album it's apparent this was all part of her plan. “Headphones connected to the iPhone / iPhone connected to the Internet / Connected to the Google / Connected to the government,” the opener warns. Agit-prop or no, M.I.A. doesn’t want her story told over a network of links to more links to conspiracies to ad data. She wants it told the old fashioned way—verbally.

But first, who is M.I.A.? After the nine-page New York Times profile that turned into a full on battle with writer Lynn Hirschberg, it became apparent that people should probably start giving a shit, just to decide whether they love her or hate her. Is she a true victim of a war-torn childhood, set to change the way people think about third world politics? Or is she, as Hirschberg painted her, a phony L.A. prick who doesn’t know what she’s talking about? The fact that she tweeted the reporter’s phone number after the interview has everyone evaluating her character, which means added pressure for /\/\/\Y/\ to tell her story as accurately as possible. So does it succeed? Not quite.

/\/\/\Y/\ is the singer’s most fragmented, sprawling and messy release yet. Produced with the help of Rusko, Blaqstarr and Sleigh Bells’ Derek E. Miller, the album is an homage to all of the trends going on in Pitchfork-approved indie music right now. Lo-fi, dub step and militaristic samples abound—the track “Meds and Feds” using the exact same sample as Sleigh Bells’ album closer “Treats.” Yeah, they’re buddies, but the reference starts to feel like an unwanted speed injection on our capacity for nostalgia. “Remember that song from a month ago?” If this was her first album, her trend savvy would be notable, but by now we expect her to be cutting the path, not following it.

The album does have a few singles, like the rollicking rocker “Born Free” (video and back story here) and the slightly ditzy “XXXO,” but they’ve already been circulating on airwaves for long enough to make them instant skip-overs when approaching /\/\/\Y/\.

A few of the unheard tracks are gems, like the Orwellian opener “The Message,” which reminds us all that in the plugged-in world there are plenty of people being watched by the government. “Tell Me Why” showcases her new musical hobby—singing—which she does in a mediocre, occasionally off-key manner, although, somehow, with plenty of charm nonetheless. Despite having little depth beyond complaining about “haters,” it’s hard not to sing along as she chants, “Start throwing hands up / like you’re mad at the ceiling.”

“Lovalot” is the only track where M.I.A. makes with her trademark style of quick rhymes and stunning references to political happenings. “Like a hand-me-down sucker throwing bombs out at mecca,” she raps, referencing a recent terrorist couple, the husband killed by Russian police before the wife went on to become a suicide bomber.

It’s songs where she makes westerners see perspectives of supposed “enemies” that have made M.I.A. one of the most engaging musicians of the past decade. Unfortunately, once she sets out to talk about herself, she loses focus. Getting denied her visa while recording her last LP, Kala, forced her to record everywhere from Japan to Australia, and the world around her was reflected in her songwriting. But when it comes time to talk about herself, the best she can muster is “I don’t wanna talk about money / Cuz I got it / I don’t want to talk about hoochies, cuz I been it.” More than anything, M.I.A. is a storyteller, but she might be too humble to let us in. Instead, she’ll cut us loose to listen to sprawling jams about tequila and icky weed because, as she sings in “Space Odyssey,” “My lines are down / You can’t call me / As I float around in space odyssey.”