The Beatles in Hawaii

I never saw them live, but our paths briefly crossed in Kailua in May 1964. 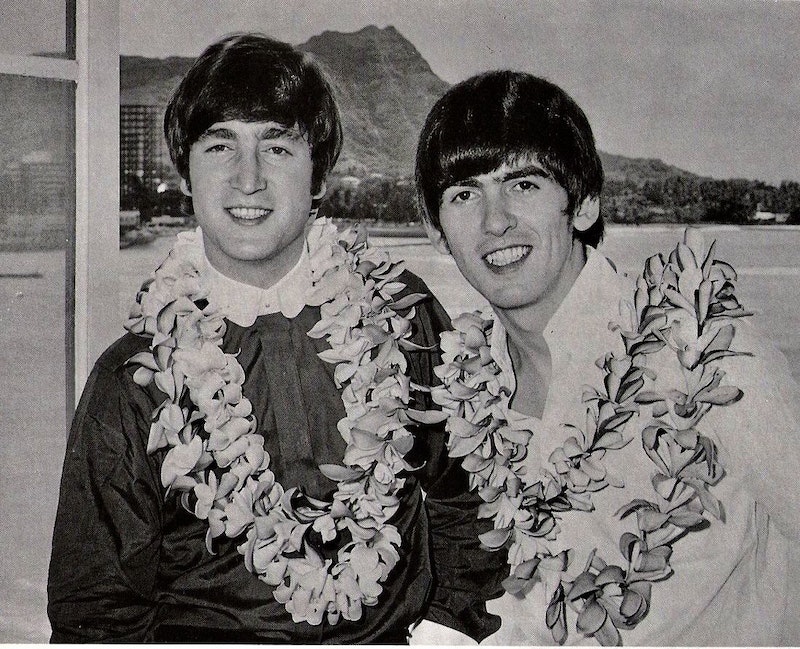 Rock concerts I’ve seen: The Stones, The Who, The Doors, The Byrds, The Eagles, Hendrix, and Deep Purple, among others at their peak. But I never saw The Beatles, and have a good excuse. My father was stationed on Oahu from the years 1963-1968. I was between 12 and 16, and the Beatles never played Hawaii. But being in Kailua in May 1964 enabled me to get as close as I’d ever get to a Beatle.

The news was broadcast on KPOI radio around noon on a Sunday: John Lennon and George Harrison were in Kailua. They’d set out over the Pali Highway from their suite at the Royal Hawaiian Hotel looking to catch some sun at a private residence, and take a break from Beatlemania.

“We want some peace and quiet,” George told reporters at Honolulu International. But the Royal Hawaiian had been thronged, and the escape to Kailua found out. The house in question—only a few minutes from ours—was besieged.

My father wasn’t a fan. He had proclaimed the quartet a flash in the pan when we gathered around the television for the first Ed Sullivan shows, likely to be forgotten within a year. He was doing yardwork that Sunday when I approached him with my transistor radio, begging that we drive over to the house. He thought about it for a few seconds, and the spirit of adventure must’ve grabbed him, because he told me and my oldest sister to jump in our 1962 Buick station wagon.

Teenage girls and boys were running through the neighborhood, ducking past hedges and hiding behind banana palms. There was a police presence, and some media vans. We came to an intersection that offered a view of the house, but the cops had the street that runs past it cordoned off. They directed my father to turn left, away from the aborted Beatle hideaway.

We drove down, and I was sure we’d arrived too late, when I saw a large black vehicle pull up at another intersection. You didn’t see a lot of large black vehicles in Kailua in 1964, so I looked, and saw John Lennon in the back seat. He and George had just made their getaway. Lennon had a big grin on his face.

In the subsequent days, the story of John and George in Kailua got a lot of media attention. KPOI took phone calls Sunday night. While some felt bad that the twosome couldn’t relax, others raved about how their mere presence was tantamount to a holy visitation. The Honolulu Star-Bulletin, which I scoured every day for news about the Beatles and the British Invasion, had a front-page spread, with photos of the fans we’d seen marauding around the upscale shorefront homes on Kailua Bay. The Beatles had been whisked away to better rest prospects in Tahiti.