There isn’t really a musical genre for this album. 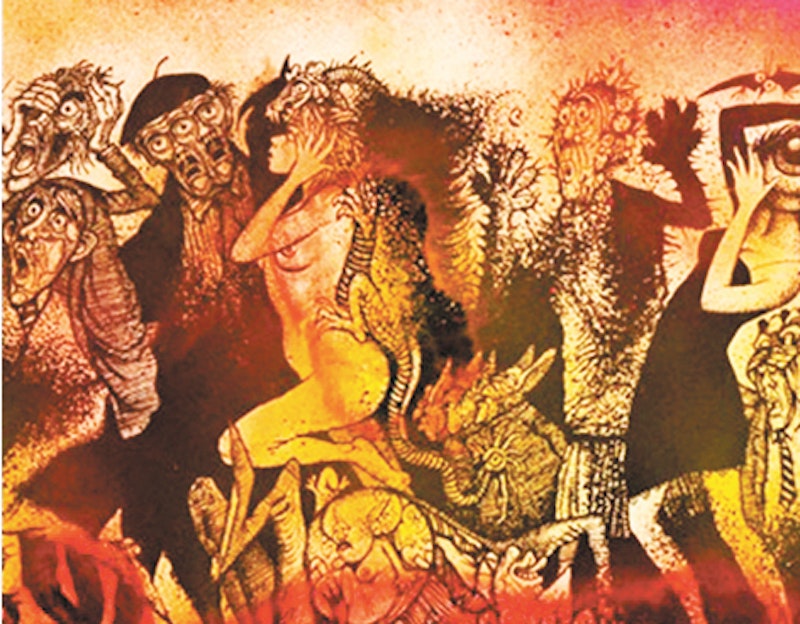 Storm Corrosion is a new collaboration between Steven Wilson, guiding spirit of Porcupine Tree, and Mikael Åkerfeldt, founder of Opeth. For many people, that alone is reason enough to be excited.

That album, Heritage, seemed to be continuing a development audible on Opeth’s previous two albums, Ghost Reveries and Watermark. Åkerfeldt and his band were moving away from traditional metal, toward something more textured. It was tempting to see Wilson as contributing to that process, and when Wilson came out last fall with his second solo album, Grace For Drowning, there was a kinship between its sonic texture and the brooding sounds of Heritage. Storm Corrosion (the name of the Wilson-Åkerfeldt collaboration, the name of the resulting album, and the name of the second song on the album) fits in nicely with those two discs; Wilson’s called it the “final part of the odd trilogy of records.”

Storm Corrosion is a remarkable work. “There isn’t really a musical genre this album would fit into,” says Wilson in a promotional YouTube video. “It’s probably closer to progressive than it is to metal, but that’s not saying much, because it’s not really... it’s not rock music at all, is it?” Åkerfeldt suggests it’s psychedelic; if so, it’s a very dark, slow, muted sort of psychedelia, so far afield from what the term typically suggests as to be functionally useless in this context.

The issue of genre is significant because the album has such a specific feel. Wilson and Åkerfeldt create and manipulate atmosphere carefully, with a precision of both musicianship and production technique. There’s a rich, organic texture built of an aural clarity. Åkerfeldt has taken the lead in guitar playing and perhaps songwriting, and Wilson the lead in production, but there’s no sense of a division or of one sensibility overlaid on another. It’s a true collaboration, not just Wilson working on Åkerfeldt’s music.

Wilson’s mentioned a relative lack of interest on his part in typical verse-chorus-verse structure, and a greater fascination with the prog aspiration of taking a listener on an “emotional journey” over the course of a longer song—shifting from one musical and emotional terrain to another to another, the way a film or other extended narrative naturally has to cover a range of feelings. That’s in evidence on the six songs on Storm Corrosion. But while two of the songs are above 10 minutes long, and a third is 9:52, it doesn’t sound much like traditional prog, the occasional odd time signature aside. The songs have very precise structures, designed to create specific effects. There’s nothing wasted here, nothing baggy or formless.

The instrumentation isn’t typical of a rock album, either. Then again, it’s not necessarily folk-like or jazz-like or classical, though there are bits and pieces of all that; “brooding folk-rock” perhaps comes closest to capturing the album. The songs are mostly based around acoustic guitar, with bass, some percussion, some keyboard effects, and some woodwinds. Most of it comes back to Åkerfeldt or Wilson: “I think 98 percent of the album is either myself or Michael,” Wilson’s said, and the album has an audible unity despite the range of emotions in the music.

The first song, “Drag Ropes,” is a fair sample of the approach of the album. There’s a kind of tension of its sounds, an attention to the sonic picture. A sense of dread builds. As it develops, the construction of the song, the way sounds build and drop out, feels intuitive and yet also carefully-planned. As with a lot of the album, a number of moments come as surprises the first time through, and yet on later listens not only make sense but feel inevitable. Different themes or musical ideas, introduced in different ways, come to work together. What could have felt coldly cerebral instead feels intuitively right.

The title track, the second song on the disc, is based around a simple, hypnotic, acoustic guitar phrase—which at the midpoint of the song suddenly starts building in a different direction. Then drops out into random-seeming noise, radiophonic sound, musique concrète, which itself builds only to drop out back to acoustic guitar. Here as elsewhere, through all the technique, the album feels minimalist although it’s really nothing of the sort. The vocabulary of sound Wilson and Åkerfeldt use is rich, but their restraint in each track, and each section of each track, is notable. They could kick the doors out with lush production effects, but instead use only the right sound at the right moment to build the atmosphere they want. Like minimalism, it’s an art of implication, but at no point does it shy away from detail and the explicit.

The third song, “Hag,” is vaguely similar in that it builds from a simple opening through a lusher range of sounds, then cuts to recorded laughter, and then seems to start again as a new song. But it returns to its first rhythm, which builds again to electric distortion, to wild drumbeats. By the end of the song all the elements from earlier on seem to have returned, drawn together easily. It’s a different and wholly effective development.

“Happy,” the fourth song, and “Lock Howl,” the lone instrumental on the album, both demonstrate in different ways the sonic precision of the album. There’s a willingness to pause to let a sound happen, and echo, and focus on the sound attentively. “I love acoustic instrumentation,” Wilson’s said, “but I love taking beautifully-recorded acoustic instruments and starting to process them in ways that perhaps have not been done before. And Storm Corrosion is a great example of that.”

You can hear the processing on the last track in particular, “Ljudet Inman.” The phrase is apparently Swedish for something like “ancient music,” and in fact the song sounds like part of an old soundtrack recorded from decaying film. Wilson again: “One of the images that just came [during the writing process] from I-don’t-know-where was storm corrosion... it suggested two things. It suggested, number one, something natural, like a storm, and it also suggested something old and decaying. And I liked that kind of fusion of the natural and the decayed.” You hear that consistently through the album, and perhaps that’s the key to its disturbing effect: the sense not only of the richness of the natural world, but the awareness of decay, of entropy affecting sound much as it does everything else.

Wilson did most of the singing on the album. He’s said the words were “pretty much made up on the spot,” so as not to interfere with the musical creation of the album, but they’re pretty creditable for all that; elliptic, vaguely gothic, they adhere to the sensibility of the rest of the album. As he’s said, it’s all informed by Hammer horror movies, and old ghost stories like “Whistle And I’ll Come To You.” A reference in “Drag Ropes” to a “turn of the screw” seems pointed. But if the album knowingly hearkens back to the folk-song tradition of the murder ballad, there’s a sense that the main reason for the vocals is not to communicate in words, but simply to add the complexity and emotion of the human voice to the fabric of the songs.

Storm Corrosion is an intense, exhausting listen. It demands alertness, and repays it with rich melancholy and profound unease. As an album, it feels like a whole, a continuity and not just a collection of songs. There’s an arc to the album, so that the last song seems to ease you out in its final bars. By that time you’ve been disoriented and disturbed, brought along, as Wilson hoped, on a journey through foreign lands.