A tour of mullet country. 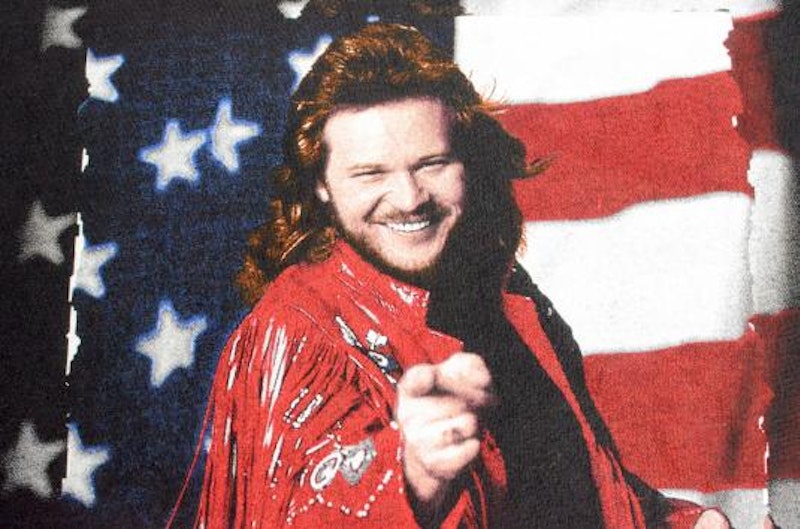 Let this whole big mess be a lesson to you. Don't move too extremely toward any particular hairstyle, lest you and the world become confused as between your great head and your problematic hair, and you get lobbed into obscurity as your style is superseded by something more sensible. After the big flip, Farrah Fawcett-Majors was never really taken seriously again as a Shakespearean actress. Macklemore may never recover. Some of the great artists discussed below may have fallen victim, tragically, to tonsorial obsolescence. They overcommitted, I feel.

My favorite period of country music is the “neo-trad” phase: call it '88-'94. There were amazing country singers, and for one reason or another there were amazing mullets. I was living in Nashville, and I had one too. The mullet blossomed like a mushroom cloud after the Billy-Ray-Cyrus Achy-Breaky-Heart explosion in 1992. That was the paradigmatic mullet, but Billy Ray was the least interesting of the artists.

The most enduring, and perhaps the best of the coonskins was and is Travis Tritt, who has just come out with a killer 24-cut live album called A Man and His Guitar. The title is trite, but rarely has a person been better suited to the concept. If Travis is now a master in his prime, he was a rowdy, party-forward helmet-head in '92, with a raft of great traditional country and Southern-rock songs, often featuring his buddy Marty Stuart, who also appears on the new album.

Stuart's own hair over the years may be too extreme to be a mullet: it is a hyper-mullet, a post-mullet. Marty had some great singles in the early 90s too, in a more lightweight 1950s-pop mode. He’s one of the few who never wavered in his profound commitment to his hair, as well as to American musical traditions.

But I want to spotlight some great singers who didn't quite survive the tragic collapse of the mullet in the mid-90s. Up until then, the period in country music was really one of very self-conscious, but very beautiful traditionalism, harking back to Merle Haggard, Buck Owens, George and Tammy. On the male side, one singer was idolized above all: Keith Whitley, who sounded more traditional than George Jones and in a relatively low-key way conveyed the most extreme emotion. Whitley married into country royalty when he nabbed Lorrie Morgan, and had a voice of astounding suppleness and intensity. He was cultivating a big perm by the time he died in '89, of alcoholism. A legend, like Hank Williams. But with a mullet.

About the best ever to sing in a Whitley mode was Davis Daniel, who had a blond mullet and a beauty of a baritone. Daniel had a couple of semi-hits with "Pictures of You" and "Fire with Fire," but rarely has an artist been more undeservedly forgotten. Man he doesn't even show up on an iTunes search. The catalogue is a mixed bag, but is well worth hunting up.

MCA did release a "best of" on Mark Collie this year, thank God, and those are exemplary songs that emerged from under Collie's shaggy yet likewise exemplary mullet. Right now I’m listening over and over to the national anthem of American heterosexuality: "Calloused Hands (Love Tender Skin)." These songs return me to various specific corners in Nashville, as well as various specific divorces.

Of all the singers of the era, the most fun was Joe Diffie. He did semi-novelty songs like "Prop Me Up Beside the Jukebox (If I Die)," but they often featured remarkably well-constructed country lyrics, and they were always well sung. The stuff has aged great, and the videos at this point read as classics of perfectly-conscious kitsch. Then, as now, everyone in Nashville was a songwriter, and Diffie skimmed off a lot of the best material for five years or so. "I'm just glad I run out of air hose when I come at you with that nail gun," he warbled.

One guy who'd fit beautifully in this group, except that he didn't have a mullet, is Sammy Kershaw. But he's got the style: twanging honky-tonk, sung in an excellent Whitley-esque fashion, often very amusing. Sammy's cowboy hat turned out to last longer than Davis Daniel's thatch, and he's still going right on, I believe. Oh there might be others: Tracy Lawrence, Neal McCoy, Aaron Tippin, Ken Mellons (yes, I said “Ken Mellons”), the great Doug Stone.

At any rate, a lot of these guys rode the mullet wave as it crested, then wiped or petered out into later phases of hairstyle and country-music history. But don't let them disappear under that hair; they made some great records.

Keith Whitley and Lorrie Morgan - "When a Tear Becomes a Rose"

Davis Daniel - "Pictures of You"; "Fighting Fire With Fire"

Joe Diffie - "Third Rock from the Sun"; "Prop Me Up Beside the Jokebox"; "John Deere Green"; "Junior's in Love"

Doug Stone - "Better Off in a Pine Box"