Squaring Up to the Death of Toots Hibbert

His great theme was our redemption. 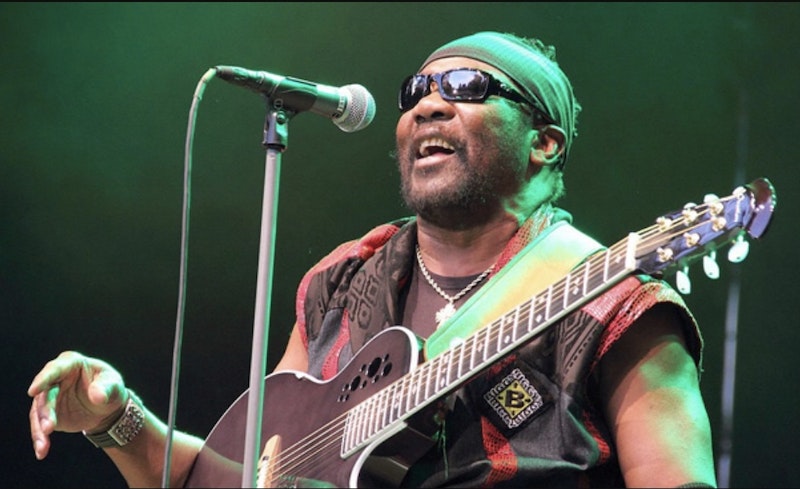 By the time Toots Hibbert died in September, I couldn't face up. I'd already done immersive obits on John Prine and Betty Wright, downloading everything I could find and listening to it for days: feeling some of the music I've cared about most for longest with a renewed joy intensified and undermined by loss.The death of a childhood hero (much less childhood crush) prods you in the ribs with your own death, or is part of the process: it's as though bits of one's brain or personality are ceasing to function. Toots was born in 1942, Prine in 1946, Bonnie Pointer in '50, Wright in '53. The Reaper is stalking us '58ers now.

One of the most alive live shows I ever experienced was Toots and the Maytals at the Carter Barron Amphitheatre in DC, circa 1975. I was there with my brother Bob (and at his insistence; he was a Toots devotee) and our girlfriends Jamie and Beth, who were sisters. Toots poured it out for two hours, classic song after classic song, singing even better than on his classic records: growling it out it like Wilson Pickett one minute and flying into a delicate Smokey Robinson falsetto the next. And it was definitely a soul-style revue, the stage full of horns, back-up singers, and multiple percussionists. Toots wound up shirtless, sweat spraying as he shook, feeling better and better in a way that was contagious, until he seemed to collapse in ecstatic exhaustion, only to pop up into an encore of "Reggae Got Soul."I was with Jamie, but lusting after Beth; it was worth it just to see the way Toots made her move. But we were all rocking throughout, semi-crushed in front of the stage, in a continuous call-and-response with the great Toots Hibbert.

Long before that, Toots was central to Jamaican music, and as the recording industry in Kingston invented itself and ska in 1961 and '62, he was there singing it, along with people like Jimmy Cliff and a very young Bob Marley: good candidates eventually for the three greatest reggae singers. With the Jamaican recording industry—as fast-changing and creative as any in the world through the 1960s—he made the downshift in '66 and '67 to the half-speed ska beat known as rock steady. Then he sped up again in '68 with songs like "Do the Reggay": by consensus the first time the word 'reggae' (or something like it) appeared on a record, albeit as the name of a dance, not a genre.

He and Cliff took my group of American teenagers by storm on the soundtrack of The Harder They Come, a Jamaica-produced movie starring Cliff and featuring a scene of Toots and the Maytals in the studio doing their classic ska "Sweet and Dandy."The star of the soundtrack, though, was Pressure Drop, perhaps the song still most associated with Toots; it had a beautifully-crafted but spontaneous feel; it was just so fucking groovy. Also it meant something about a revolution. We partied hard to that album for two years.

Though he is central to and a symbol of Jamaican popular music (and was still living in Jamaica at his death), he was in many ways an atypical figure. He had a prophetic streak (as in "Six and Seven Books of Moses") and enthused now and then about ganja, but he never grew dreadlocks or sang about Ras Tafari. Songs like Careless Ethiopians (from the great 1981 album Knockout!) hint at anti-Rasta sentiment, perhaps from a Christian point of view. Like a lot of reggae stars, he came originally from rural Jamaica (May Town), but unlike them he kept signaling this fact with rural themes and references to American country music (and not only on the definitive version of Take Me Home Country Roads).

He's unusual, too, in his devotion to a particular kind of American soul: the rough-and-ready style of Pickett or Otis Redding: very southern and churchy (like most American soul greats, Toots started singing in an evangelical church). Other Jamaican rock steady singers (Bob Andy, for example, or Ken Boothe) emulated much smoother versions of American soul music.

And though Toots helped coin the word and the genre, I don't really think of him as a roots reggae artist. After the '68 speed-up, reggae slowed way down into what Marley called the "one drop," kind of hitting every other backbeat. Toots never slowed down with it, or completely entered into its atmosphere of apocalyptic preaching and meditation. The songs didn't work when disassembled into dub. Writing for Baltimore’s City Paper, I made Knockout! the #1 album of '81, but I still think it's basically rock steady rather than reggae: Toots preserved and expanded a certain moment in Jamaican music when everyone else abandoned it. As central as he was from early in Jamaican music, he developed independently of it after 1970. But he did keep developing.

In a typical coda for a master, he won a Grammy for the 2005 album True Love, in which he sang his greatest songs as duets with various rock and pop stars (Ben Harper, Bonnie Raitt, Willie Nelson, Ryan Adams), as though he needed their stamp of approval. It has moments, but it's not any kind of place to start listening to Toots and the Maytals. On the other hand, the BBC got this wonderful documentary out of it.

As the public health authorities ponder which populations to prioritize for vaccination, I hope they’ll focus first on the musicians that I can’t bear to lose, because I've had just about enough. I'd develop a list of essential personnel, but gazing on the names of the prospective dead would just make me more melancholy and self-pitying than I was before.

On the other hand, that seems ungrateful, as Toots's great theme—like Marley's really—is redemption. One way or another, I've been listening to everything I could find that Toots recorded (a comprehensive box set is past due), his joy mingling in my head with our loss into an experience of beauty.

Playlist: somewhat less-heard songs by Toots and the Maytals. They recorded a number of versions of many songs, so I'm giving the playtime to pick out the relevant recording.