An alt-country group from St. Louis is the first in a continuing series of interviews with burgeoning artists. 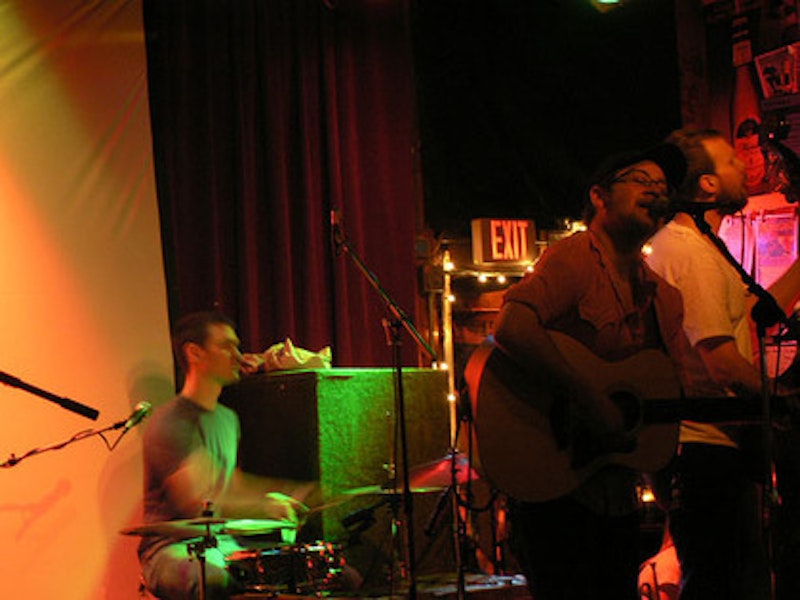 This is the first in a continuing series of Splice Premieres, articles that profile artists, musicians, and filmmakers that are making careers outside the mainstream media. Along with interviews and background information, these articles will contain samples of the artists' work, including unreleased or newly debuting material.

Well, I'll just come right out with it: I love me some old-timey music. Anyone who's read my past interviews or album reviews can tell I'll listen to pretty much anything folk or country (okay, I draw the line at "Honky Tonk Badonkadonk"). So a couple weeks ago, when I saw Theodore play at El Rancho Grande in Baltimore, I knew I had to talk to them. Theodore is a lo-fi alt-country band from St. Louis  who recently released their second album, Defeated, TN—a kind of Faulknerian chronicle of an American family. Frontman Justin Kinkel-Schuster's heartfelt lyrics are reminiscent of early Ryan Adams, and the band's eclectic instrumentation (banjo, kazoo, accordion, horns, saw, etc.) and styles makes them more than just another Uncle Tupelo or Whiskeytown spinoff. Their first album, 2007's Songs for the Weary, opens with "Back From the War," which, along with Bonnie 'Prince' Billy's "I See a Darkness" and a couple Tom Waits b-sides, ranks in the Top 10 on my “Best Sad Bastard/Cry In Your Beer Songs” list. Last week, I emailed Kinkel-Schuster, and, after telling me all about Defeated, TN and the recent tour, he was good enough to let Splice post a couple of songs from Songs for the Weary, as well as a cover of Leonard Cohen's "Chelsea Hotel No. 2" and an early demo of an unreleased song, "Nowhere Near the Sea." Enjoy.

SPLICE TODAY: Can you talk about how the band got together? And what's with the name Theodore, anyway?

JUSTIN KINKEL-SCHUSTER: Theodore as it currently exists (and hopefully will continue to for a long time) began when I moved to St. Louis in 2005. I played a few shows solo and met Jason, our drummer, in early 2006 at one of the shows I was playing.  Fairly quickly after that we met [guitarist] J.J. at another show, although it was summer of ‘06 before he joined up.  And I'd known [bassist] Andy for a few years. He was my roommate for a year in college and when he graduated we got to talking and it turned out that he was into the idea of moving to St. Louis for a while to play and things sort of began moving from there. As for the name, I initially chose it in honor of a favorite author, Theodore Dreiser. And the name just seemed alright, at least not abominally stupid or anything. And now, it's just a name, and what's in a name really?

ST: Who are some of your musical influences?

JKS: As far as musical influences go, its almost impossible to trace, we're all such avid mental collectors of different sounds and things that the music hopefully is so mangled and bastardized as to be recognizable but not easily categorizable. my biggest writing influences are Damien Jurado, Willy Vlautin, Raymond Carver, and the Blue Sky Boys.

ST: What's the music scene like in St. Louis?

JKS: The music scene in St. Louis is generally really good. There are certainly venues and bands that are very supportive of us and that we are proud to feel likewise about, and there are cool record stores, which is also nice. I mean there's a lot of great music happening here all the time, and a lot of people that support it, so there's really nothing more one could expect from a scene I suppose. It seems like in a lot of places people say unkind things about whatever "scene" is happening in their city, but I think in St. Louis, as in anyplace, one's view of the "scene" is going to be determined much more by one's attitude than by any inherent merit or defect in the scene itself.

ST: If you could redo any TV theme song, what would it be? How about one of the old westerns? Bonanza? Gunsmoke?

JKS: I think it would be Reading Rainbow. I've already got it worked out a capella, it just needs reworked music.

ST: What was the recording process for your first two albums?

JKS: The recording processes for the first two records were pretty drastically different. The first record we recorded over a couple of months track by track at J.J.'s old apartment, completely on our own, with J.J. engineering, on his computer. We would just start with me playing the songs and singing them on my own and layer everything over that. And it worked out well, I think. But for Defeated, we wanted to do it completely different, live and to tape. So we rehearsed the shit out of the songs, booked two days at a place called the Penny Studio in St. Louis and tracked the whole record in two solid days of recording, most of it live.  And it ended up working out really well, thanks in large part to Jason Rook, who engineered the record and kept us highly entertained. So we've sort of hit the poles of the spectrum the first two records, and I'd imagine the next record will fall somewhere in the middle.

ST: The lyrics for your second album, Defeated, TN are drawn from a collection of letters found in an abandoned house in Tennessee. How did this all come about? Did you find the letters? And how did you work them into songs?

JKS: As for the background of Defeated, TN—in January of ‘06 were on our first tour together and we had a day off, driving through Tennessee, and decided to take some back roads, small highways, you know. And for a couple of hours driving we kept seeing decrepit, abandoned looking buildings, homes, businesses and the like. And the thought came up, why not stop at one and have a look around? So we kept driving a while and finally, happened to pass an abandoned looking house and said “let's stop here.” And of course, we weren't expecting to find anything, really... but when we stepped inside, it was shocking. The entire house, every room was scattered with household debris, clothing, furniture, toys, records, all this family's stuff. It was unbelievable. So we started looking around, and although it looked like someone had just thrown things around right before ditching the place, everything was from at least 20 years ago. [It] had just been lying there, waiting.

And then I came across a shoebox, which turned out to be full of letters, mostly from a husband to his wife and family, and many of them from prison. Again, hard to believe what we were seeing. So we eventually left, and started reading the small portion of the letters we had grabbed to take with, just to be sure that what we'd seen was real. And after reading just a small portion, it was just staggering how heartbreaking, real, and genuine these letters were. It was, and is, like a treasure to the type of person who is fascinated by things like this, and we were and are that type of people. And it was within hours of finding them that we'd come up with the idea of making this material into songs, I think it started out like maybe a 7-inch but just grew and grew and finally it was a full length. There was definitely a sense of compulsion about every aspect of the creation of this record, and I think it will be singular for us in that respect. I hope that it is.

ST: On your website, you say Defeated, TN, is your attempt to chronicle the "disintegration of an American family faced with life's toils, troubles, temptations, and dangers." Did you sort of work those themes into letters or were they already there?

JKS: As far as themes, I guess I felt that the bits of the story that we pieced together and the rest that we took a good deal of artistic license with were so perfectly suited as thematic material for any sort of creative outlet that there was no need to inject anything. It's all there, first tender love, the hardening and cracking of that relationship, remorse, regrets, the bonds of family and place that either comfort or contort you, or both, trying to make some semblance of a good life for yourself out of the mistakes you've made, as far as I'm concerned, it was all there just hanging from the vine... a crabapple with small spot of sweetness growing inside that only a person who's looking will find.

ST: You just got back from tour. What were a couple of your favorite venues?

JKS: On this just-ended tour, it may sound like pandering, [but] the show that we played in Baltimore at El Rancho Grande was, to me, the best show of the tour by far, and one of the best shows we've been fortunate to play, period. It was a packed room of kind and generous listeners, thousands of miles from home, and two of the finest singers and songwriters we've met, Caleb Stine and Peter Schmader, on the bill. It was fabulous, absolutely. We played a lot of really cool places and met so many kind and talented people, but the El Rancho show stands out in my mind.

ST: What have you been listening to recently?

JKS: Recent listening, speaking for myself, has been comprised of Wanda Jackson, Fleet Foxes, the Kinks, Damien Jurado, Buddy Holly, and the new Dr. Dog record. Plus a ton of other stuff.

ST: Any plans for the next album? Or is it too soon for that?

JKS: Plans for the next album are to start doing demos as soon as we all reconvene after various other brief holidays. We have a lot of songs that we're itching to lay down and I imagine a new record will be done, if not released, within a year or so. But we're going to take a bit more time recording this one hopefully, so it could be a bit longer.

ST: Who would you want to duet with? You know, if it could be anyone. What song?

JKS: I'd want to duet on Ernest Tubb's "Careless Darlin'" with Jolie Holland.