Paul Westerberg is the latest name-brand musician to use the Internet to minimize record label interference, but this model doesn’t prove anything other than an older artist's technological adaptability. 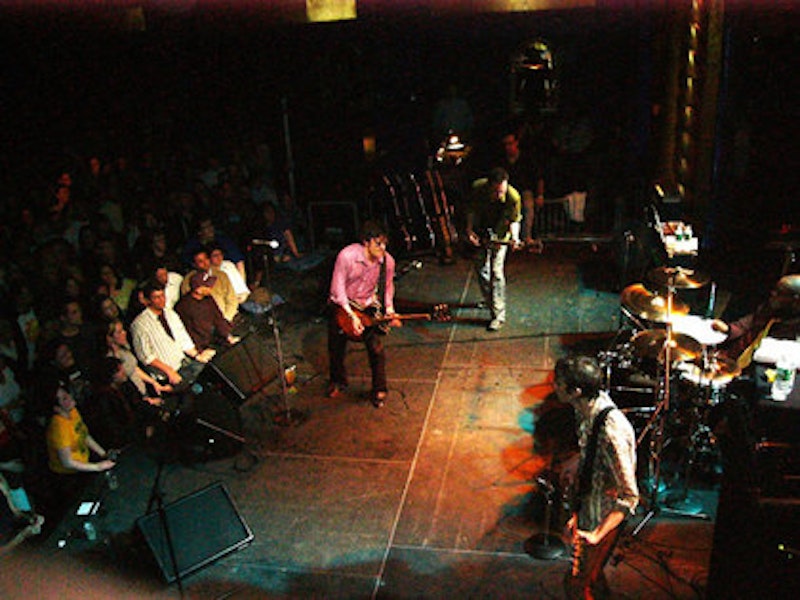 The fact that Paul Westerberg released his new album 49:00…of Your Time/Life as a 49-cent digital download isn’t particularly groundbreaking, but it was a great way to get the music press to care about a new Paul Westerberg album in the first place. And it worked for the music-buying public, as well; since its debut on July 19, 49:00 has continuously been Amazon’s number-one mp3 album download, above Coldplay and the Mamma Mia! soundtrack—a pretty unprecedented achievement for a nearly 50-year-old musician with no label whose last album peaked at #178 on the Billboard album charts.

Westerberg’s hardly an unknown, however, particularly to fans of his legendary 80s band The Replacements. Over the course of a decade, the ‘Mats moved from a drunken thrash-punk Minneapolis quartet to a (slightly) less drunken polished studio pop band, eventually bowing out with the Westerberg solo-album-in-disguise All Shook Down in 1991. He then put out a couple pleasant and professional-sounding major label albums before heading relatively underground, recording for smaller labels like Vagrant Records and putting albums together in his basement studio. A few records came out earlier this decade under his Grandpaboy moniker, as well as a movie celebrating his new DIY aesthetic, Come Feel Me Tremble. Since 2005, greatest hits albums have come out for both The Replacements and Westerberg’s solo career (the latter bore the immortal title Besterberg), and the old band’s full catalog has been reissued by Rhino, so it’s not as if Westerberg’s coming out of hiding with 49:00. But in hitching his wagon to the digital trend, he’s suddenly become relevant as more than just an icon.

It helps that 49:00 is an incredible record in addition to a personal business change-up for Westerberg. Despite its title, the album only last 44 minutes, but it’s a dense listen even at that length. Westerberg achieved his 49-cent pricing goal by formatting the album as one long mp3; even if you wanted to break the thing up into individual tracks (a Westerberg fan site has given it a go in their July 26 News entry), many of the songs last less than a minute and they all overlap as if you were listening on the radio. At one point, there are two different songs playing in the left and right speakers. Musically, 49:00 is of a piece with Westerberg’s trademark brand of endearingly sloppy folk-rock, only now he plays all the instruments himself; it’s melodic, impassioned, and comfortable, enough so that he includes a minute-long classic rock medley of songs by the Stones, Beatles, Elton John, Steppenwolf, The Kinks, and more.

So 49:00 has a couple new tricks for Westerberg, but nothing that hasn’t been done before. The lo-fi-jukebox album sequencing recalls Guided by Voices or Olivia Tremor Control in their mid-90s heydays, and the one-man-band idea looks back to similarly iconoclastic solo masterpieces like Todd Rundgren’s Something/Anything? or Paul McCartney’s whimsical experiments like Ram. (A less immediate influence in this regard is Stevie Wonder, although “Music of My Mind” could easily stand in for 49:00’s title; manager Darren Hill told Billboard, “You're getting a glimpse inside of Paul's head here.”)

But of course, the most media-worthy information about 49:00 concerns its digital release, a neat little innovation for the supposedly computer-less Westerberg, but a pretty familiar format for nearly any other working musician alive. The gee-shucks tone with which 49:00 arrives seems a little quaint these days; in the same Billboard interview, Hill said, “It's just wonderful that you can actually do this. The freedom an artist can enjoy these days is fantastic. Can you imagine me pitching this idea to a label?”

No, and that’s why many independent musicians don’t bother. Westerberg’s 49-cent download idea is notable because he figured out a way to make a little money from the Internet’s media free-for-all—who wouldn’t pay half a dollar to a living legend, if only out of curiosity?—but this platform isn’t exactly news for young entertainers. One of the year’s other best releases so far, Walé’s The Mixtape About Nothing, has been available for free download since May, and it offers an equally insightful view into an artist’s head and an even greater assessment of artistic possibility in the digital age.

Like Westerberg, Walé offers a nice bit of journalist bait with The Mixtape About Nothing’s encompassing theme: the 72-minute album recontextualizes audio samples, graphics, and even the theme music from Seinfeld. A conversation between George and Jerry about growing up and treating women correctly appears in the middle of a song about same (“The Grown Up”). A clip from Michael Richards’ notorious “nigger” outburst last year frames a song (“The Kramer”) about the use of that word in popular culture. There’s even a cameo appearance by Julia Louis-Dreyfus. Hip-hop originated with this kind of cultural appropriation, but it takes an artist as talented, funny, and self-aware as Walé to make an actual cultural point with it; by showing an obvious reverence for Seinfeld and placing dialogue snippets inside his go-go and soul music landscape, he finds the common ground between mainstream NBC entertainment and the far-reaching tastes of a young, globally aware (Walé’s parents are Nigerian immigrants), and culturally literate young black artist. Seinfeld is merely the unifying element of an album that contains lyrical and musical references to Sly & the Family Stone, J Dilla, the Baltimore club scene, YouTube, and the death of the record industry—in other words, as many cultural references as a typical contemporary hip-hop album, and Walé sends up these conventions with titles like “The Skit,” “The Bmore Club Slam,” and “The Cliché Lil Wayne Feature (It’s the Remix Baby!”).

Like 49:00, the music on The Mixtape About Nothing switches styles constantly and without any notice (“I hate rap like Kramer hates blacks,” he says at one point), but this is typical for hip-hop in a way that it isn’t for Westerberg’s more musically consistent folk and rock genres. Westerberg’s pacing and mixing is defiantly contemporary by his own standards, as is his release model. But the different commercial approaches to 49:00 and The Mixtape About Nothing also epitomize the different opportunities that the Internet provides for both established and rising artists.

For an existing talent like Paul Westerberg (or Radiohead, or Nine Inch Nails), the Internet provides a sudden opportunity to make music without corporate influence; it’s a way to connect with fans more immediately after a time of presumably greater commercial pressure. For a relatively unknown talent like Walé—and we have to go back a few years for this example, as The Mixtape About Nothing is his fourth free release overall—the Internet provides a springboard with which to get your name out. Daniel Weisman of Elitaste, who handles Walé’s music, told me that there have been “definitely over 50,000” total downloads of The Mixtape About Nothing since May, and while none of them have gotten Walé any money, his profile has been considerably raised by this and the previous free downloads he offered. “Jerry Seinfeld's assistant actually reached out to me asking for a copy [because] Jerry had heard about it and wanted to hear it,” Weisman also said; additionally, Walé has appeared on The Roots’ most recent album and is currently touring with the Rock the Bells festival alongside legends like A Tribe Called Quest, Raekwon and Ghostface, Nas, Afrika Bambaataa, De La Soul, MF Doom, and others.

Together, Walé and Westerberg have created some of 2008’s most urgent and creative pop music, and they also happen to represent the extent and scope of the record industry shift that’s occurring. As the CD format lurches closer to obsolescence, digital releases have become more inevitable as an industry norm, often supplemented by vinyl-only physical releases. But cultural and economical sea changes like this don’t happen overnight. Instead, the change in formats is happening gradually, and Westerberg represents an established musician’s best response while Walé represents an aspiring one’s greatest hope. By the time Walé is Westerberg’s age (another 25 years), it won’t be novel anymore for a musician that old to release a new album digitally; that novelty will likely expire with Westerberg’s generation of musicians, perhaps along with the record industry as we know it.