Days before the historic election of Barack Obama, songwriters Christian Kiefer, J. Matthew Gerkin, and Jefferson Pitcher, creators of the compilation Of Great and Mortal Men: 43 Songs for 43 Presidents, organized a Bands for Lands benefit featuring These United States, Tim Fite, Jukebox the Ghost, and many more. Live videos after the jump. 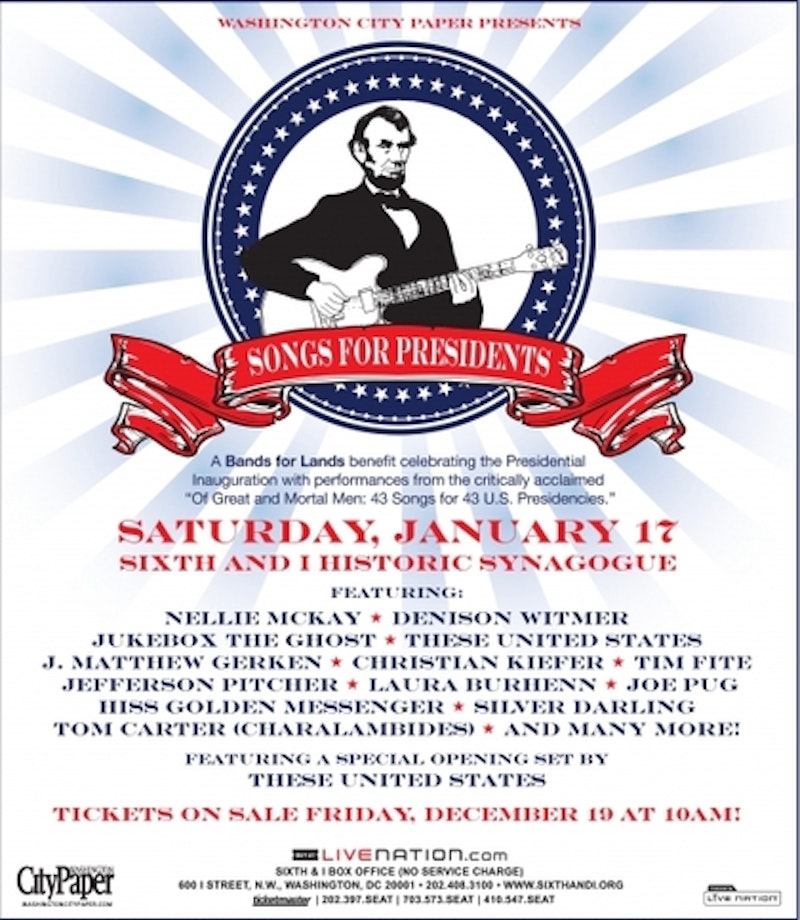 The show at the Historic Synagogue, 6th and I St. in downtown Washington, D.C., just off Massachusetts Ave. and about 10 blocks from the National Mall, kicked off with a 30-minute set by D.C.'s own, These United States, a band I've praised often, and videos of which can be seen in an earlier post. After I arrived I called Christian Kiefer who came downstairs, hugged me and thanked me for coming, and then set me up with a press pass for backstage access. I took to the balcony for filming, since the platform stage had plenty of mic and music stand obstructions. Christian Kiefer played the first song, "Washington Dreams of the Hippopotamus" with some help from the colonially garbed Buccaneers marching band:

Standout performances of the night were by Tim Fite, Jukebox the Ghost, and Middle Distance Runner. Fite's version of "Bees and Honey," a song about Grover Cleveland, which unfortunately I didn't get on film, was one of the more amazing live shows I've seen in the past few years. Luckily I got his second song, "Beard of God," and was able to talk to him backstage, where he gave me a free copy of his latest album, Fair Ain't Fair (full review of this soon).

No videos of Jukebox the Ghost either, but my friend Sarahana from Hooves on the Turf did film Middle Distance Runner's version of "Such a Marvelous Dream" (about Ronald Reagan):

Other fine performances of the night included These United States (again, from Hooves on the Turf):


These United States: "Rough and Ready" from hoovesontheturf on Vimeo.

As well as Silver Darling and Mike Taylor (of Hiss Golden Messenger, formerly of The Court and Spark):

You can find out more about Of Great and Mortal Men: 43 Songs for 43 Presidents here.