Return of the Nerves!

The punk era's best four-song band finally gets the reissue recognition they deserve. 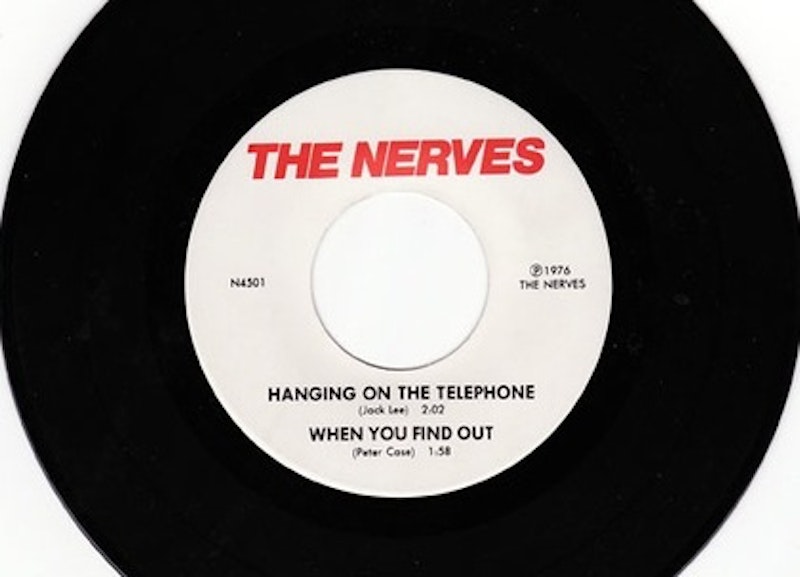 The Nerves were a power-pop trio that released one four-song EP in 1976 and that's it. After a self-financed national tour that led to the pinnacle of their minuscule success—opening up for The Ramones—the band called it quits in 1978 and moved on to individual projects. Calling The Nerves a blip in musical history would be an overstatement, yet for decades the band remained ensconced in the memories of pop and punk fans alike. In the latter half of a decade that saw the dissolution of classic, psychedelic rock and the eventual mainstream acceptance of blood-and-guts punk, The Nerves seemed to be the band that connected it all. They bridged frenetic, youthful rebellion with melodic song structures; their music could be listened to in the living room or the garage. The thought of rereleasing the original EP 30 years later is therefore a no-brainer. But Alive Natural Records didn't stop there. One Way Ticket packages the remastered tracks with 16 other live takes and demos, making for a collection that finally recognizes the seminal musical accomplishments of one of the most unaccomplished great bands in history.

The Nerves' original self-titled release is a role model in equal distribution. Each band member has a song credit and everyone lends vocals in addition to their musical parts. During their brief stint touring along the West Coast, The Nerves would punctuate their live performances by wearing matching pink suits. By the time they burned through a couple numbers, their sweat-soaked, candy-colored clothes became a perfect image of the band's fusion of punk and pop-rock.

The hybrid genre of power-pop was gaining momentum in the Los Angeles area partially thanks to Greg Shaw. Shaw had his hand on the pulse of independent music and culture as a band manager for The Flamin' Groovies, editor and publisher of Bomp! magazine, and eventual label head of Bomp! Records. His love for classic 60s rock and despise of 70s FM radio artists left him grappling for some kind of middle ground. When Shaw proposed "power-pop" to the masses he had really envisioned bands like The Who or even The Sex Pistols. It was around this time that The Nerves entered his radar, and while they weren't anything like The Sex Pistols, Shaw did help distribute their EP. However it only took a couple years before Shaw was fed up with promoting new wave, power-pop, or any genre that would be exploited for the financial appetite of the commercial music industry and closed down the Bomp! enterprise. The Nerves also called it quits around this time.

"Hanging on the Telephone"

Like every great forgotten band story, The Nerves recorded one song that only became a hit when another artist covered it. "Hanging On The Telephone" was written by guitarist Jack Lee and popularized by Blondie on their best-selling album Parallel Lines. The song famously begins with a two second dial tone before launching into a hook-laden pop rhythm. The prominent guitar chords play with Lee's vocals, occasionally adding emphasis to lyrics in the form of extended punctuation. The moment you listen to the original it becomes clear why so many bands (Def Leppard, Cat Power) have covered it.

The other three songs from the original album are excellently preserved. "When You Find Out" seemingly cops a musical refrain out of The Beach Boys' catalog while "Working Too Hard" layers beautiful melodies over a mid-tempo beat and delivers a singularly effective line in "Why don't you/say goodbye to me/you know you never try." "Gimme Some Time" is the lightest melody of the original four but manages to pack an effusive punch in just under two minutes.

"Stand Back and Take a Look" [demo version]

Of the added material, the highlights can be found in the demos and the previously unreleased studio material. "Stand Back And Take A Look" rides a beach-walk strum before building up to a chorus that's one step short of matching the uncanny pop-hook quality of "Hanging On The Telephone." "Letter To G" is presented here in two versions, demo and live. Despite the production miscues, namely the suffocation of the main vocals, the demo version is more exciting for the simple fact that you can hear the richness of the instrumentation alongside the lyrics. There are also a handful of songs from Nerves offshoots The Plimsouls, The Breakaways, and Jack Lee & Band which feel appropriate as part of the full catalog.

Thirty years ago the music industry underwent so many convulsions and transformations that capitalizing on a sound and expecting it to last beyond a year or two was deemed foolish. Of course for every "limp, second rate band" out there, as Greg Shaw would call them, there was a band that possessed a special sound and simply needed exposure. The Nerves never got that exposure, although they didn't spend much time seeking it either. One Way Ticket is a fascinating collection that finally sheds light on a band whose immediate break up once over-shadowed its musical output.

One Way Ticket is out now (including a red vinyl version!) on Alive Naturalsound Records.