Sonic Youth guitarist Lee Ranaldo on the Simon Werner a Disparu soundtrack, the SYR series, and film music in general. 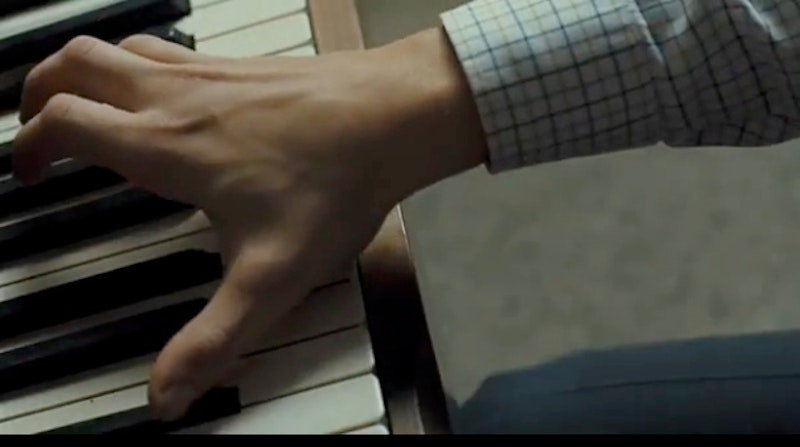 Sonic Youth’s SYR series never gets the hagiography, resepect, or press afforded its straight rock LPs. This is understandable, because the SYR entries are more difficult to process and appreciate from a traditional verse-chorus-verse perspective. There’s no coy sloganeering. There’s not as much Kim Gordon cooing like a fiftysomething teenager. Killer hooks? Forget about it.

No, the SYR slabs are messy, man, stalking the borders between song craft and abstraction, drilling down into PA system abuse and out-and-out noise and harrowing, no-rails minimalism—hey, if you can hang with SYR 3, you can probably hang with just about anything.

(If you can hang with Silver Sessions for Jason Knuth, you can and should hang with Lou Reed’s Metal Machine Music—or vice versa. That’s one to grow on.)

Simon Werner a Disparu, the latest SYR treat, might be the best and most contemplative recording yet in this series, running fusion-jazz hot and orbiting-Mars cool even as it drips dolorous pianos into the nicks and gouges the band’s meandering-cum-machete-slashing japes left behind. Make no mistake, the soundtrack is Sonic Youth through-and-through, but it’s almost like Sonic Youth lounge-pop bubblegum, albeit lounge-pop bubblegum seasoned with gunshot and thermite. In a February email interview, guitarist Lee Ranaldo shed some light on this soundtrack’s gestation process, scoring music for films, and the SYE series.

Splice Today: The SYR series packaging has been presented in the French, Dutch, Italian, Lithuanian, Arpitan, and Danish languages. What's up next?

Lee Ranaldo: I don't think we did Italian, did we? SYR 3 was Esperanto. I see this is actually the third in French—perhaps a bias there? We'd like to do an Arabic language. We did SYR t-shirts some years ago with an Arabic logo, and it looked very cool. Kim's (SYR5) was in Japanese with English translations, I guess if we did Arabic it would be something like that. Would be cool to do Greek, Russian, Korean, Thai.

The inspiration for that was taken from a series of “modern music” records that came out in France in the 50s or 60s; we lifted the design elements and optic graphics from those records, and liked the idea of skewing the information by setting it in other languages than English, so maybe folks wouldn't know if it was an imported release or what.

ST: How did Sonic Youth come to compose the soundtrack for the Simon Werner a Disparu soundtrack?

LR: While on tour in France in 2009, we met with first-time French director Fabrice Gobert about the possibility of scoring his film, Simon Werner a Disparu. We watched scenes of his film backstage at an event we were doing in Paris, and liked what we saw on the screen—ostensibly a teenage murder mystery, but in reality of a close study of the intertwining lives of a group of French youths, their hookups, friendships, flirtations, and confusion, beautifully shot by Agnes Godard. We agreed to score the film, which is primarily told through the viewpoints of four principal characters, and how they each perceive the same series of events. We would need to come up with thematic musical material for each of these characters.

In the spring of 2010, we did sessions at our Echo Canyon West studio in Hoboken, New Jersey, and, over a couple of weeks, kicked out a few hours of music while watching rushes of the film, trying different moods and instruments to begin shaping music for the various scenes and themes for each of the main characters. Mostly we did this by turning on the film and then recording a bunch of long—30-45 minute—improvisational compositions, group composing, with the running film providing a bit of visual guidance. Later, we would listen back to the material and begin to decide which sections to work on further, and for which areas in the film. It helped a lot that the director provided copious notes as to where he wanted music and some ideas of what he was looking for in each case.

ST: Between Made In U.S.A., Demonlover and the various other soundtracks that Sonic Youth have contributed to over the years, you've had a good deal of experience with writing for cinema. When you watch films that have score accompaniments, do you find yourselves sort of unconsciously judging whether the images and storylines fit the music?

LR: Sometimes. It's interesting to pay attention to the score in a film; a good one almost slips by unnoticed, it's so integrated with the images. Some films just strike the perfect balance between sound and images. It's an interesting area to work in, but also sometimes difficult.

Bands are used to having a certain amount of control over their music, and when you work with filmmakers there are often many people deciding how a film will end up. You make the music with one intent, but it always has to ultimately serve the director's vision, so sometimes we'd find music created for one scene used elsewhere, mixed too quietly, etc. My memory of Made in U.S.A. in particular runs to those things. Working on Demonlover with Olivier Assayas, and now Simon Werner with Gobert, were probably among the more pleasurable experiences we've had working in film.

For Demonlover, we started writing music based on the script alone—Olivier had sent us the script and asked for music. Later, as he began shooting, he'd send us rushes which we'd watch and then record more music and send to him. He was playing our music on the sets—[or so] I'm told—while running the scenes. It went back and forth like that, and by the time he had the shooting done, we had about 80 percent of the music needed in the can.

And for Simon Werner, we all got together and over a couple weeks had the film running while we recorded several improvisational sessions—30-45 minutes at a time—and then listened back to all that and found places for different thematic bits in the film. Later, we refined these cues, selecting certain elements sometimes, overdubbing new ideas other times, and generated the score like that.

ST: Part of what's most striking about this score is the inclusion of piano, which softens or loosens the feel of some of the compositions. Going in, was the incorporation of pianos part of the plan?

LR: The only plan was to record a bunch of various approaches, as we knew we were looking for themes for the four main characters. Both Thurston and I played piano at points, and we also did some sessions with Thurston on acoustic guitar, and some stuff without drums, or only percussion, trying to get different moods.

ST: In the ongoing SYR series, Sonic Youth has collaborated with everyone from Christian Marcaly to Ikue Mori to Tim Barnes to Merzbow. Are additional entries planned? Who are some of your dream collaborators for future installments?

LR: We've got a couple more releases in various stages of preparation right now, including a 1985 set from our USA EVOL tour, and a collection of various Sister LP demos which we discovered. Beyond that there are a bunch of other possibilities in our archives.

A few years ago we had prepared for release a DVD/CD package of work we had done with the great French chanteuse Brigitte Fontaine and her partner Areski. We had worked with her on some tracks for her 'Kekeland' album, and this proposed SYR release was to be those tracks and some others we subsequently prepared with their collaboration—stuff that still hasn't been released. In addition to the music CD there was to be a DVD of a concert we all did in Paris together at the Pompidou Center, an improvisational excursion with Areski playing percussion with us—this is all back when Jim O'Rourke was in the fold as well—and Brigitte in amazing costumes dancing and reciting her lyrics and poems, and Kim vocalizing as well. It's a pretty amazing package documenting our collaboration from that time, maybe the mid '00s. Unfortunately, red tape with Brigitte's record label has prevented this from seeing release.

ST: Separately, the five of you pursue myriad projects and collaborations, musical and otherwise, that simultaneously complement and challenge the idea of Sonic Youth as a core project. Do you ever find yourselves wishing that there was more time for Sonic Youth to write, record, and tour together? Do you ever, when alone, go "Man, I have this great concept or direction that I'd like to bring everyone together to make happen," but then it's just not possible to pull it off logistically, or at least not immediately?

LR: SY is generally motivated to pursue interesting options, and not feel obliged to take the “expected” next move. At various moments that's meant working a whole lot together, and at others kinda stepping apart. Over 30 years, we've tried to side-step some of the repetitive conventions of the music biz; you know, "write/record/tour/repeat." We've taken time off at a few occasions to do other things we've felt motivated to attempt musically or in other fields, and certainly our individual projects have a way of bringing new information and energy to the group dynamic.

And then recently we found ourselves writing/recording The Eternal, which we are all super happy with: both the LP and the touring we did behind it. To try and turn right around and repeat that last working cycle without pausing for breath? Rather not, right now.