Even More Reunion Talk From The Pixies

Is twenty years long enough to make a new album? 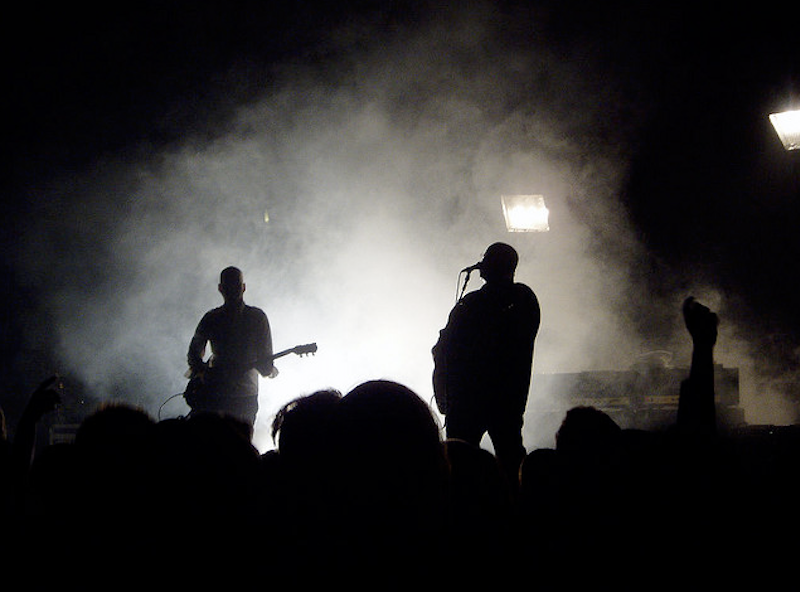 Entering its eighth year of reunion shows—twice the time it took to release its four studio albums—the alt-rock deities in the Pixies are once again making noise about heading back to the studio to make an all-new set of originals, the band’s first since 1991’s Trompe le Monde.

“We’ve been talking about this for about three years now, actually,” drummer David Lovering tells Billboard.com. “I don’t know if it will come to fruition; I’m waiting and waiting to see what will happen. All I can say is if there is one, it better be good. We’d really have to work at it.”

“We’re waiting for that, like, ‘Aha!’ moment. I’m already there,” adds lead guitarist Joey Santiago. “It’s just a matter of timing and everything aligning. There’s days where I think it could happen and other days I go, ‘The shit’s never gonna happen.’”

Notably absent from the piece are the band’s yin and yang, singer/songwriters Frank “Black Francis” Black and Kim Deal. Never the most jovial bandmates to begin with—they famously stopped speaking to each other while on tour for the group’s best-loved album, Doolittle, and Black only informed Deal and Lovering of the band’s demise (by fax, no less) after announcing it in a BBC interview—they’ve continued sniping at each other in the years since, in varying degrees of semi-playfulness.

Indeed, Deal took a well-aimed shot at reunion rumors in a 2007 Pitchfork interview, dismissing them as “kind of something to bring up whenever [Black] needs press. That’s the only time I hear about it. I have no idea, dude.”

So in other words, despite Santiago’s being “already there” and Deal’s more or less being behind the idea, it’s all in Black’s hands, and he probably won’t be dropping any of his semi-regular hints until the current tour, celebrating Doolittle’s 20th anniversary, wraps in May.

The Billboard.com piece raises the possibility that the Pixies could put off having to face the question head on by revisiting its debut album Surfer Rosa in concert instead. (The article insists on calling it Surfa Rosa, but that’s what you get when you assign such pieces to Gary “Musichound Country: The Essential Album Guide” Graff.) And after that, there are still the less-beloved Bossanova and Trompe awaiting their attention. (Santiago jokes that the Pixies’ next album recreation “may be Exile on Main Street.”)

While the Pixies reunion shows have been well-received (and well-documented; limited releases of each show on earlier reunion treks can still be had on eBay for around $25), is anybody outside of the band itself—and maybe not even some of them—truly excited about getting back together and recording new material?

Not if the 2004 single “Bam Thwok,” an evanescent two-and-a-half minutes of Deal whimsy that’s as forgettable as its title, is any indication. It remains the only new music the group’s recorded this century; Kim was apparently saving the good stuff for the diminishing returns of her sometime-group with sister Kelley, The Breeders.

Not that Black’s extracurricular career has been anything to scream about either. He’s cranked out about 20 albums since 1993, and as you’d expect some (Teenager of the Year, Dog in the Sand) have been better than others (Pistolero, Christmass). Is there any reason to believe that, confined to a studio with the other three, especially Deal, he’d come up with something to rival “Where Is My Mind?,” “Monkey Gone to Heaven,” “I Bleed” or “All Over the World”?

And then there’s the whole reunion issue to contend with. A concept once disparaged by alt-rock nation as something best left to dinosaurs like Yes, Fleetwood Mac, and Crosby, Stills & Nash, the idea’s understandably become a little less anathema as middle age has encroached. But while reunion tours by the likes of My Bloody Valentine, Pavement, and Public Image Ltd. have proven to be worth it, is anybody still spinning Farm by Dinosaur Jr. or Sewn Together by Meat Puppets? Probably not.

It’s probably for the best that the Pixies exist only as a touring outfit (certainly for Santiago and Lovering), and Black and Deal continue to express themselves in their own projects to their fiercely devoted, if steadily shrinking, fanbases.