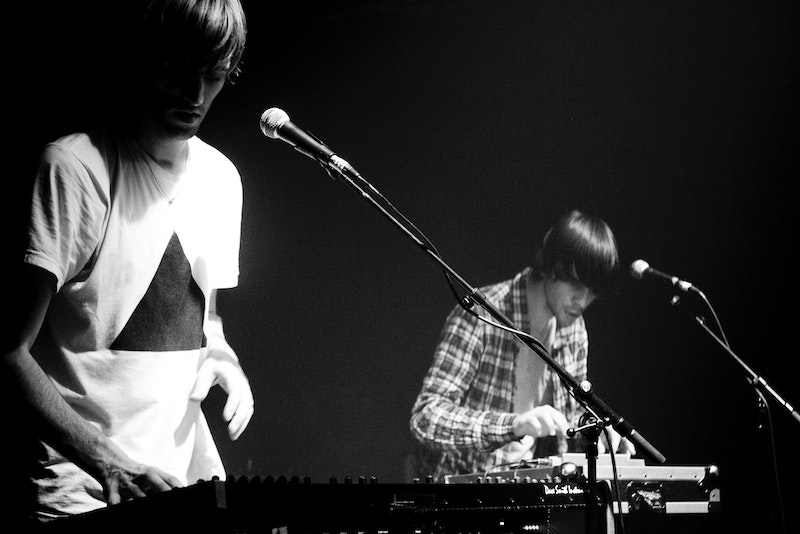 I almost didn’t get to write this review. I pitched it to the editor and he said (paraphrasing loosely) “Electropop? I’d rather be gently jostled to death by the erratic shuffling of crowds of pale day-glow college students with dilated pupils and aggressively swooped coiffures!

But then, there was a poof of light and a flash of synthesizers, New Order descended and the freedom to boogie (but not too hard) was unleashed in his stony heart’s inner disco ball. Either that or he just figured what the hell. And so! I give you! Zonoscope, by Australia’s Cut Copy!

Is it as good as 2008’s In Ghost Colours, with its seamless 50 minutes of swirling pop melodrama built out of hooks that sink into your brain and drag it onto the dance floor for romantically intelligent cortex ravishment?

No, it is not that good. The big difference between Zonoscope and In Ghost Colours is perhaps that the moves on the later album are familiar. In Ghost Colours sounded urgent, one of those discs that seems to be grabbing the zeitgeist by the throat and insisting that this, this, is the sound that all the kids are going to be listening to—or should be listening to, anyway. Cut Copy didn’t exactly blow up like Robyn, though, and Zonoscope seems to acknowledge that superstardom is out of reach. It’s more laid back, it’s ambitions more routinely ambitious. The not-bad-but-really-must-you-15-minute “Sun God,” with its hints of tribal rhythms is, for all its ostentation, a lot less unexpected that the mercurial shifts of texture and melody in In Ghost Colours, where the songs flowed into one another like an exhilarating herky-jerky succession of multi-colored shadows. Zonoscope is less bright and less adrenalized. It seems to accept that this is a second tier band that’s going to make a career out of creating good album after good album and so better settle down and get used to it.

But for all that, it’s still pretty great. If you ever felt some sort of pleasure from listening to U2’s earnest nonsense while still wanting to punch Bono in the sunglasses, you can get the same feeling without the nausea by listening to “Need You Now,” where the synths soar sweepingly and multi-tracked harmonies harmonize while Dan Whitford over-emotes with all the love and none of the smarm. “Pharaohs and Pyramids” is all 1980s video blips, stiffly swinging bloops splashing around you as you attempt to shoot the caterpillar and declare your undying love. And then there’s “This Is All We’ve Got,” a 4:40 mid-tempo track that’s fairly rote until the last 30 seconds or so, when somebody starts to improbably play “Shortnin’ Bread” above the synth washes. Maybe it’s a little too obvious a way to say, “hey!  it’s electropop for people who hate electropop”— but fuck it. “Shortnin’ Bread” has always been one of my favorite tunes, and it sounds great coming out of nowhere, all shined up like plastic. This may be a holding pattern album, but it’s a lovely, catchy holding pattern that effervesces pleasantly without a bitter aftertaste. If this is Cut Copy’s future—well, it could be a lot worse.