Someone Make the Pain Stop

Sleigh Bells' Reign of Terror is high on the list for worst album of the year. 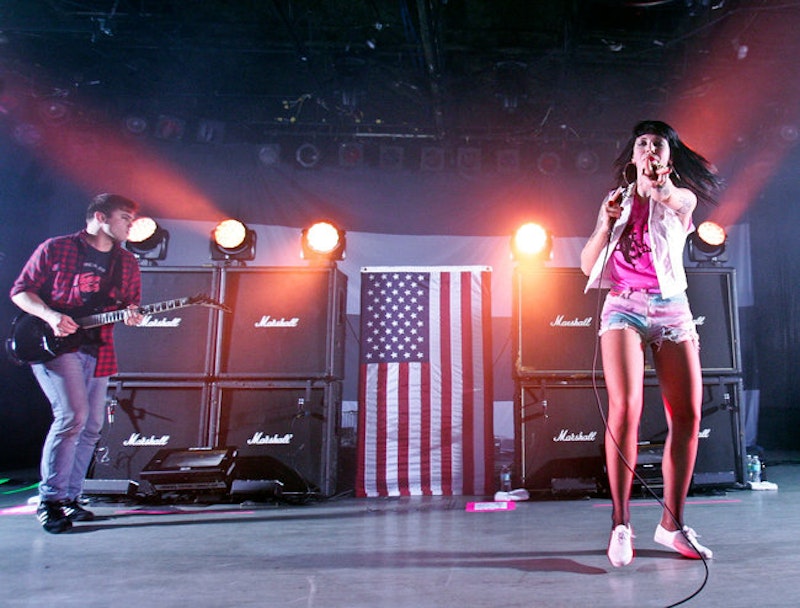 Reign of Terror sounds like the bronze medalist of the Rock Special Olympics. It’s a little special in a lot of ways. Sleigh Bells’ second album is a continuation of their first—dumb cock rock riffs over a drum machine with robotically pretty female vocals. The songs are ehhh but everything sounds terrible because of the mastering. This is one the loudest albums I’ve ever heard, and it’s painful, disorienting to listen to even a single song at regular volume. This music should be weaponized. Whoever mastered Reign of Terror had Guantanamo Bay in mind. It’s a nauseating, cutting loud that makes you feel toxic, and that’s on top of songs that sound like guitar camp exercises, or fight club karaoke. Sleigh Bells squirt the moldy original scent rock clichés out like piss on all of our faces. These songs are nothing more than muzak.

Good for you guys, though. You made a record that reminded me of the music from Jet Set Radio Future, a goofy graffiti game with some super overcooked but catchy as fuck J-Pop songs like "Concept of Love." It’s corny as hell, repetitive, and disposable pop, but it is in fact listenable by human beings. Playing this record past “4” is not advised by any doctor. If Sleigh Bells think this is how recorded rock should sound they deserve the tinnitus. The rhythms are stuck in the mud and have absolutely no swing, no heart, and pretty much all the sounds are clipped or distorted beyond any hope. I’d have no problem listening to Reign of Terror in a bowling alley or while playing mini-golf. Maybe surfing the Disney Channel. I can tolerate bad songs like bad food at the ballpark for the occasional unique hook or whatever. You finish the Polish sausage and instantly you realize you’ve made a horrible mistake.

Reign of Terror is bad and bad for you. I can only imagine the pain of those who saw them on their recent Florida tour with Diplo and Liturgy, a more interesting and tonally smart guitar band. The one time I saw Liturgy, this past summer at DC9, they sounded pretty bad, but cranked tube distortion and an acoustic drum kit will always sound better than distorted computer abortions. There’re infinite ways now to use things like like Ableton, Roland SP samplers, ProTools, and tone shaping to make new and interesting music of the time. I resent the fact that our generation does not have a culture to call its own, other than many loose, disconnected threads and a sea of cement-head retreads of retreads of retreads of refried beans. Sleigh Bells are part of the problem, not the solution. Don’t bother with this trash.