Hitting Bottom with All Those Damn iTunes Files

Certain situations lay bare the floorboards of your existence. Here’s one of them. 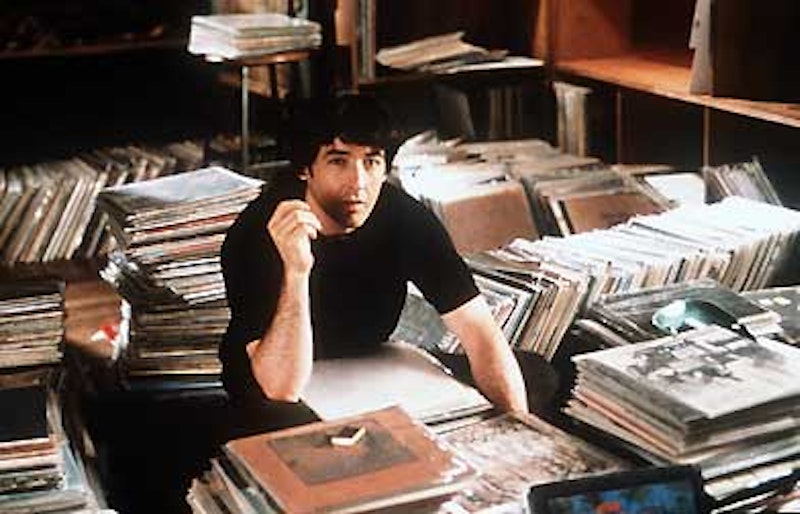 To begin with, let’s stipulate that I’m helpless. This is a comic premise used over the ages: Consider Robert Benchley’s reference some 90 years back to the “nice man at the typewriter store who changes the ribbon for me.” But it’s no fun being helpless, and I fight the realization. Because it’s not just a matter of being clumsy: It’s everything. Helplessness is what my life is about, and second place goes to thrashing about trying to convince myself otherwise. Sometimes I notice these two facts.

For instance, my iTunes application doesn’t work. Further, I just spent yesterday and today setting it up. I downloaded iTunes at the coffee shop, then came back home and sat at my turquoise, paint-stained little table and faced on to my one-room apartment’s white wall and transferred a file and another file and another file from my external hard drive to my computer’s new iTunes. Admittedly there is a simpler way to transfer music from a hard drive to your iTunes, but I say that only because I know there must be, not because I know what it is. I couldn’t find it, and I’m a hermit so I had no one to ask.

I don’t know how many hours the job took. Three this morning, and yesterday I didn’t do much else: yoga a couple of times, dicking with an old article I meant to send off, a visit to a late-evening manga event at a local institution. Otherwise yesterday was transferring files while I listened to the first four cassettes of American Gods on audiobook. I finished this afternoon. Yes, I marched right to the end of my task. It was part of the general reconstruction forced on me after I lost my Mac on the bus this fall. Lose a computer and getting back to where you were becomes one damn thing after another. I still don’t have a printer or scanner that works (fucking HP and Windows 7), but for a few minutes today I did have my music collection assembled in one place and ready to go.

How did my unsorted-files problem arise? By the way I backed up my music collection. Back when I had my Mac, I clicked and dragged the relevant folder into my external hard drive. There its contents were automatically unsorted into a Scrooge McDuck heap of audio files. Again, I know that my way could not have been the right way. The world was not set up so that backing your music files onto an external hard drive would automatically send your music collection kablooey. But I’m damned if I know what else I could have done. That is one part of my curse.

Here’s the other. In putting my iTunes collection back together, I wanted to get good at it. Understand that this was the second time in two weeks that I went through this file-tweezering and –transferring process. The first time I piled up 7.4 days’ worth of material—not my full collection, but enough. If you have 7.4 days’ worth, you have enough to justify the years of buying Rod Stewart boxed sets that you didn’t really want (some mail-order club I belonged to in the 1990s) and of lugging your late father’s Figaro­ and Cosi Fan Tutte sets home on bus rides of 500 miles.

The 7.4 disappeared because my new computer had a virus. The man on the help line said they had to wipe everything, and they did. Of course, all my songs were still on my external hard drive; I would just have to fish them out again, and this time I would do it right. I didn’t blow trumpets in my head about the business, but the thought was there: This time I will do it right. I figured this was a good sign, that my spirit was showing durability and hardiness.

First time around I’d searched for the files artist by artist, using the search function in Computer. This time I took the step of reading the location chain for one of the files and then proceeding to the location indicated. There I clicked through folders and transferred files, and it turned out that now I had found my complete collection, all 10.1 days. The realization dawned on me as I went along—here were the treasures!—and it was confirmed when I reached the end. In the meantime I had moved with efficiency. I mean, given that I was sitting in one spot for a weekend and performing a repetitive task just to avoid feeling that I had screwed up, just to avoid the thought that I had a lost years of copied CDs because I didn’t know how to back up my music collection—given all that, I was moving with efficiency. I set up the necessary folders right at the start (Classical, Rockpopsoul, Spoken, etc.) and I developed handy tricks for getting where I had to with a file so that I wasn’t always racing up and down the roster of folders and playlists. I displayed some awareness of the process and I persevered. Along the way I played the occasional tune after its transfer to iTunes. They always worked.

Something I remember with a special pang: When I was transferring my Mahler symphonies, the fourth symphony required special care. There were two performances, and the different movements were duplicated and also out of order. I had to look at the German titles that went with the movements and put them in order that way. It took a bit of focus, and before hitting on the idea I had to fight back a moment of hopelessness, of one-damn-thing-after-another. Afterwards, teezering out files for Crazy About You, I thought back to the challenge and realized it had been met and surmounted. Moments like that, the ones where I look back on a challenge and think that I met it, are the reasons I break my heart.