A Bunch of Saws and BB Guns

Sleigh Bells avoid the sophomore slump with Reign of Terror. 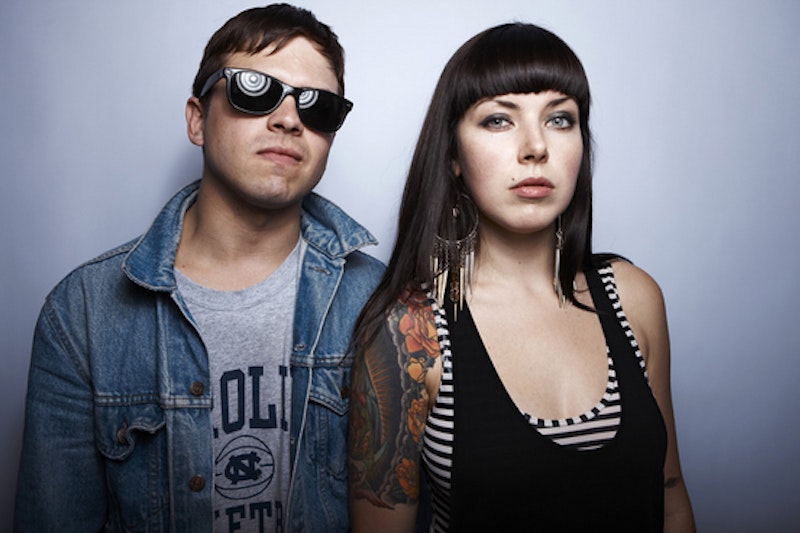 In case you were wondering what those little dollops of blood are doing on the cover of Reign of Terror, the sophomore LP by Brooklyn-based indie darlings Sleigh Bells, it’s nothing—just a bit of your eardrum bleeding from all the noise! Do not fret. Remember all those scenes from movies where some suburban, angst-filled teenager is blasting loud music and then an angry, bath-robed and/or shower-capped parent/neighbor/sibling bangs on the door and is like, Turn The Music Down! Yeah, that’s Sleigh Bells, except when you listen to an infectious song like “Infinity Guitars” from their riotous debut Treats, you actually want to turn that shit up. Reign of Terror, out now on Mom + Pop/N.E.E.T., takes the word “bombastic” to a whole other level while adding a much harder rock edge.

Ever since noise-wizard Derek Miller and the always fabulously styled Alexis Krauss got us going with Treats back in 2010, it’s become somewhat commonplace when talking about Sleigh Bells to place them in relation to volume, loudness, and noise. In a New York magazine profile out this week, Derek, who writes all his stuff without ear plugs, talked about his love for loud music: “I’m not gonna lie, I’m a volume addict. I need it. I do not listen to music quietly, nor do I enjoy it when it’s at a reasonable volume. So it’s a big part of the process for me.” It’s telling that when the band performed on Saturday Night Live last weekend, all they had on stage were 12 speakers lined up in a row. There’s such pleasure attached to loud music, and Derek must be onto something because several months back I was rocking out to “Riot Rhythm” from Treats which, for me, is still the best Sleigh Bells song, and I remember changing my Facebook status to something like, “I wish I could play Sleigh Bells even louder.”

Reign of Terror slays through the mythical sophomore slump not by turning strange sounds like chainsaws and BB guns into amazing dance music, which was how Treats got our attention. Now, the band has evolved into that innovative, very Sleigh Bells-y sound to create an intelligent patchwork of stadium rock, arpeggios, minor harmonies, heavy metal, drum machines and breathy, if not totally drowned-out vocals—though there are definitely still some BB guns. In fact, on most of the aggressive tracks it’s a real challenge to even hear Alexis’ voice—she is that overpowered, or rather folded into, the other sounds around her.

“True Shred Guitar,” an airy, anthemic track that has a cheering crowd, roaring guitar, and big drums built right in, sets the tone for loudness on the record. I remember feeling a total adrenaline rush as the song revved up—almost like, aw shit, they are about to get it! It’s a nice way to bring you into the album. “Crush,” another open-air rock number that sounds like it’s being played in a stadium for an audience of 55,000, even when played at a low volume, carries the theme of loudness forward. “Comeback Kid” and “Demons” serve us classic Sleigh Bells—BB gun filled, dance-y, rap-rock with a hip-hop underbelly—just to remind us that they haven’t forgotten how to do the sound that made them famous. Slower songs, like “End Of The Line” and “Never Say Die” tone everything down and give us melodic, pop music realness, creating a balance between all the violence and aggression.

There is something pleasing but also piercingly annoying about some sounds when played at certain levels. Sometimes sounds can just be too loud, and at other times they can be used for torture and interrogation, as The New Yorker’s Alex Ross has written. In fact, we know that music played at uncomfortable volume has been used in prisons like Abu Ghraib and Guantanamo as a form of torture, which makes Reign of Terror an appropriate title on so many levels. First, it is a commentary on the dual value of noise—as pleasurable and as potentially torturous. I’ve often felt that you’re not really listening to Sleigh Bells unless you have it as loud as your speakers can go. But Reign of Terror also evokes the real “Reign of Terror” that occurred after the French Revolution in 18th Century France, a period that is associated, yes, with the guillotine, war, violence, and revolt.

My favorite thing about Sleigh Bells is that they are a total contradiction—sweet and aggressive, masculine and feminine, pop yet deeply indie. Listening to them I’m reminded of other indie darlings like Deerhoof, who are known for spiked, mathematically precise drum lines and that innocent, breathy voice that lay over-top. But the thing I can’t wait for? A Jay-Z/Sleigh Bells collaboration. Jay would be so sick over a bunch of saws and BB guns.