A review of Living Ljubljana by Michael Hurley. 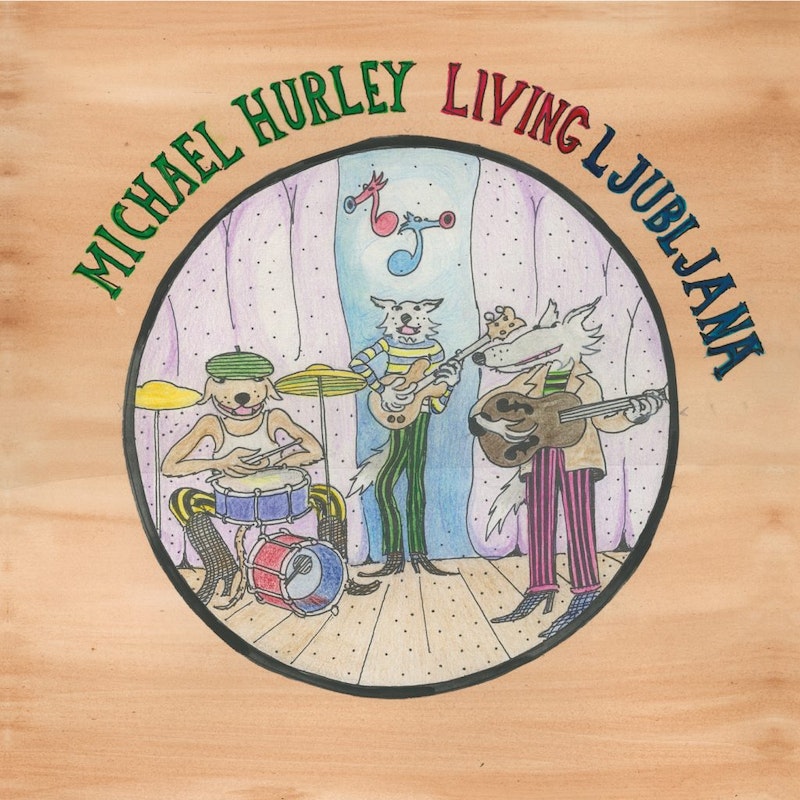 Earlier last year, Feeding Tube released Living Ljubljana by Michael Hurley. These 10 songs, recorded live on tape in March 1995 in Ljubljana, Slovenia, appear on other studio records with alternate instrumentation, timings, and musical phrases. Even the lyrics slightly alter at times, taunting a tiny sliver of Hurley's creative songwriting process. The Pennsylvania-born songwriter released his debut record First Songs on Folkways in 1963. He’s recorded over 20 since, all falling under the radar of household gossip.

This album isn't meant to be polished. Like many of Hurley's records, Living Ljubljana is rugged and ragged. Accompanying Hurley and his guitar are Robert Mitchener on bass and Mikey Bones on percussion. It sounds like the whole band is dead-eyed drunk, riffing their instruments loosely and lazily, easing the tension and setting a playful mood. Topped off by his signature yelping growl, Hurley's voice weaves in and out of tune, as if he's unaware or perhaps even unconcerned of his audience. I romanticize that most of the audience is unaware of Hurley's legacy as one of America's greatest folk singers.

If I can't drink the water from the jug/Tap alright

But I love drinking water from the jug/Every night

If I can't have the pie/My oh my, I will die

Hurley's childlike ingenuity is heartwarming and lovable, like a puppy aiming for affection from a distant owner. Hurley has a knack for condensing the complexities of depression and loneliness into simple poetic phrases that can resonate with nearly anyone who's ever suffered the gnawing ache of one-sided love. Hurley's words embody the authenticity of his humbled, slightly self-deprecated character and the brevity to acknowledge the fear of life as the terror of the inevitable looms like a shadow.

There're two Hank Locklin covers on this album, which blend so casually with the others that, although I was familiar with the tunes, I was deceived into believing they were Hurley originals. Not only can Hurley write a song, he can also curate and disguise covers as his own, a similar gift that Elliott Smith embodied in his cover of “Thirteen” by Big Star, in that they are so carelessly coated by the singer's voices that one easily forgets the origins of the tune. “Geisha Girl” and “Driving Nails in My Coffin” are the two carefully-chosen cover songs, one a somewhat sappy love tune about falling in love with a Japanese woman, the other a morbid display of the irony of a slow suicide brought on by the booze.

Though a phenomenal record for a fan, Living Ljubljana is not the first record I'd recommend to anyone unfamiliar with Hurley's work. First Songs exhibits Hurley's outsider tendencies, his gift for evoking emotion through the rawness of his imperfect songwriting style later utilized by 1990s lo-fi folkish outfits such as Palace Brothers, Simon Joyner, and many Drag City artists. This is particularly evident in “The Tea Song,” which is so heartbreakingly beautiful and so true to Hurley's gentle spirit that it feels invasive to listen to, as if you're alone with Hurley, watching him in his lonely slump, drinking countless cups of tea to forget the love that has abandoned him. Surely ahead of his time, Michael Hurley marches on the path of his beaten drum, wrinkled and tattered, drifting eternally through train tracks and tea times, arriving to no destination in particular.