With the recent reissue announcement, we have to ask: Can Billy Corgan pull it together and make another great record? 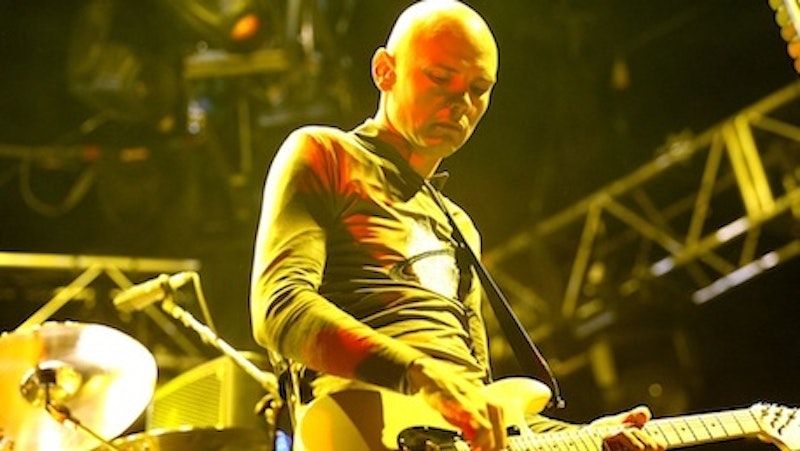 It’s been a good year in Pumpkinland. Relatively, at least: Billy Corgan and EMI announced an extensive reissue campaign of the Pumpkins’ back catalogue, starting with Gish and Siamese Dream next month, that extends all the way into 2013; Corgan and his hired ensemble just finished Oceania, an LP that might actually clear the “too-embarrassing-to-listen-to-around-your-friends” bar that Machina, Mary Star of the Sea, TheFutureEmbrace, Zeitgeist, and Teargarden by Kaleidyscope failed to—and most promising of all, the Pumpkins kicked off an American tour a few days ago at the Wiltern in LA that had their best set list in a decade and a half. I mean, holy shit: “Starla,” “Muzzle,” “Geek U.S.A.,” “Soma,” “Thru the Eyes of Ruby,” “Frail and Bedazzled,” “Pissant,” “Silverfuck,” “For Martha,” “Siva,” “Obscured,” “Window Paine.” Those 12 alone would win back any fan jaded by Corgan’s bottomless pit of mistakes and contrivances in the past 11 years. And the songs debuted from Oceania actually approach “good.”

Maybe it’s battered woman syndrome, but I desperately want this band to succeed on its own terms in the new world; Corgan’s done everything in his power to run what was once arguably the greatest rock band in the world (proof) into the ground, but he’s only 44—he must have one or two left in him. Right? On the cusp of potential goodness, we revisit the last worthwhile thing the Pumpkins did, Machina II: The Friends & Enemies of Modern Music, a double album of odds and ends released for free on the Internet a few months before the original breakup in 2000. Nothing from either Machina showed up at the Wiltern, but it’s still the last sign of interesting progression from an artist that has basically treaded water for more than a decade: the weirdest and most brazen SP ever was.

Machina could’ve been a great record: “Stand Inside Your Love,” “Try, Try, Try,” “The Imploding Voice,” and “Glass & the Ghost Children” are truly upper echelon SP, but it’s an uneven set of songs muddied by the squashed and incoherent glossy production typical of Creed or Godsmack. In other words, it’s practically unlistenable. Every circulating copy of Machina II is sourced from vinyl rips, and the crispy fidelity adds to what is surely their most spontaneous recording. It’s not amazing—there’s far too much detritus and lack of direction—but you can see glimmers and reflections of what could’ve been: the Pumpkins’ new wave album, songs that rocked hard but were texturally massaged and colored beyond the titanic but dry fuzz tone of Siamese Dream. The lyrics mostly suck but each song feels like an experiment, raw studio ooze free from Corgan’s anal perfectionism and chronic second-guessing. Like Mellon Collie, every spoke of the wheel is explored, but sloppily, off the cuff: “Real Love,” “Let Me Give the World to You,” and “If There is a God” are pure arena pop, hit singles that never were—they almost sound like Prince. “Dross,” “Glass’ Theme,” and “Speed Kills” could’ve killed off the nu metal charlatans singlehandedly; and “Home,” an ecstatic and glistening piece that’s SP’s last masterpiece to date. There are none of the contrivances that tainted so much potentially good work—these songs are grandiose, but not silly.

The Smashing Pumpkins are a two-legged dog in 2011 but no one’s come close to filling their void. I believe in Old Man Bill, I guess. He made Mellon Collie and Siamese Dream. The dude could at least put one over on U2 or something.