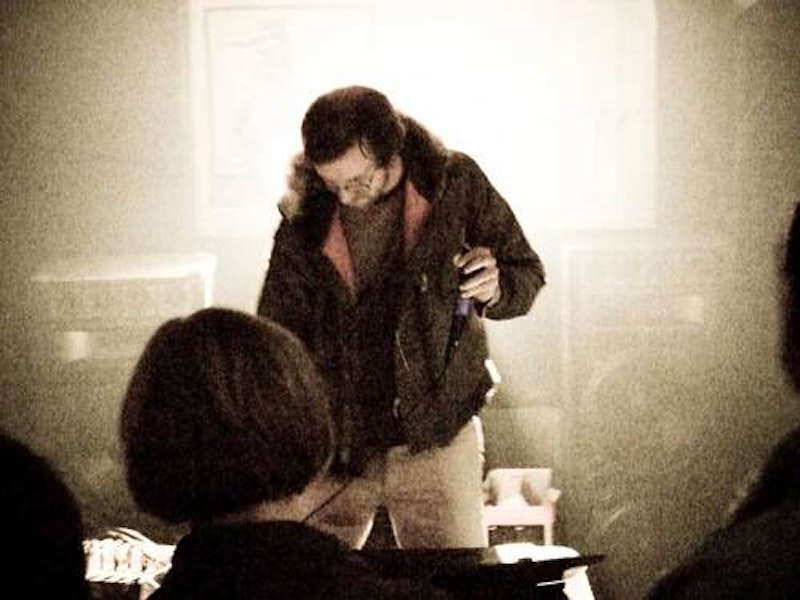 The three tracks that appear on GGA (Helicopter)—the recent-ish EP from Californian noise-lifer John Wiese—bear disparate titles and clock in at different lengths, but share one key characteristic: the skin-crawling, anxiety-attack triggering sounds of breaking glass. And when I say “breaking glass,” I don’t mean “hurling a water glass across the room in a fit of pique”; it’s shattering on a wider scale, more along the lines of “unleashing a bull in a china shop” or maybe “systematically and unsmilingly pushing over rack after hulking metal rack of ceramic plates in a hangar-like space.” Wiese’s métier involves (among other specialties) producing then deftly and judiciously editing ICM-strike bursts of noise; he proves as much here, so it’s disingenuous to interpret GGA as straight field-recorded mayhem, ala Jason Crumer’s “Home Wreck.” The pregnant pauses, exhausted exhales, laughter, and swear words that would presumably accompany the kind of massive destructive enterprise documented here are entirely absent; all sustained money shot, GGA jump-cuts crazily—if not without a certain fractal logic—from crash to crash to crash without much ceremony.

There’s an actual music in this mania, sure, if you’ve the patience to listen for it: toppling stacks of dishes eking out the dishware equivalent of a no-wave rhythm section, scattering shards tinkling discordantly merry and abrupt melodies no piano, standard or prepared, could ever hope to mime. It’s spine-tingling stuff, thrilling in a vicarious way but also uncomfortable: each dashed piece representative, possibly, of wasted effort, and of course, someone will have to clean it all up. Still, it may be more useful—and, ultimately, cathartic—to contemplate GGA’s plate-smashing psychosis as a metaphor for the folly of self-seriousness and ideological absolutes; one of these songs is titled “Laugh Therapy,” another is called “All Heterosexual Sex Is Illogical."