The Chemical Brothers and Daft Punk try out film scoring. 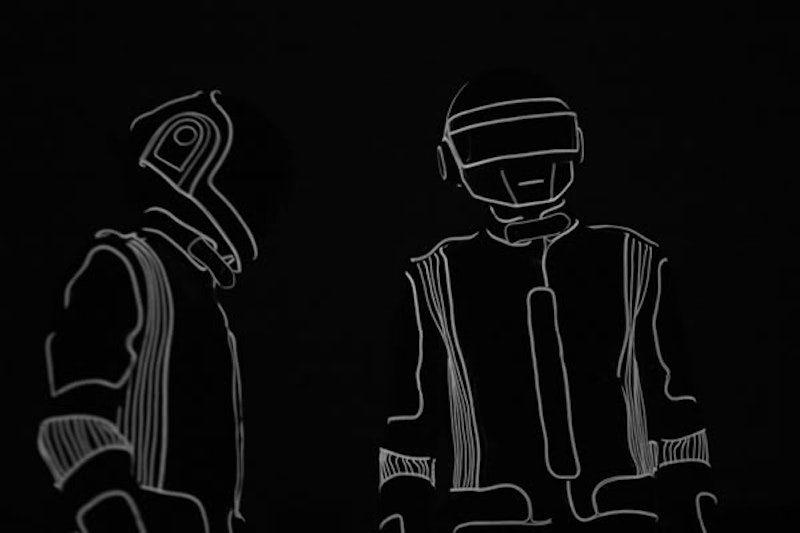 Now that Trent Reznor’s got an Oscar for his and Atticus Ross’ work on the score for The Social Network, it seems like everybody’s getting into the act. And just as the idea of Reznor creating music for a film about Facebook—as opposed to, say, David Lynch’s latest phantasmagoria—may have seemed incongruous at first, so too do the respective entries into the film scoring field by the Chemical Brothers (Hanna, about a teenaged girl assassin) and, to a lesser extent, Daft Punk (Tron: Legacy, the candy-colored update of a Disney cult hit).

Actually, DP working on the sonic textures of a CGI-riffic sci-fi epic that mostly takes place inside a computer probably sounded like a great idea at the time. But as anyone who’d breathlessly been awaiting the results, the Tron: Legacy soundtrack was a massive disappointment. Instead of the big beats and murderously catchy riffs that have always marked the French duo’s best work, T:L was, for the most part, generic background music.

This was all the more crushing, coming as it did after Daft Punk’s towering, truly hair-raising Alive 2007, which could make a centenarian’s hips twitch. There were some half-hearted defenses of Legacy mounted in some outlets, to the effect that DP was actually heading into a thrilling new ambient direction, but not too many bought that argument. When the film came along a few weeks later, it too landed with a resounding thud, revealing itself as an imagination-starved flop that practically effervesced before your very eyes. Thus, in a sick kind of sense, the DP soundtrack was a perfect match.

But now comes Tron: Legacy Reconfigured (or, as the marketing whizzes at Disney spell it, “R3C0NF1GUR3D”), a collection of remixes by the usual laundry list of name brands and up-and-comers: Thus Moby, Photek, and the Crystal Method rub shoulders with the Glitch Mob, Japanese Popstars and the humorously named Com Truise.

Reconfigured does make the music sound more awake, but it all seems a bit too late to make much of a difference. “Fall (M83 vs. Big Black Delta Remix)” gives the tune a forward-charging thrust; Moby’s “Son of Flynn” sounds appropriately widescreen; the Crystal Method’s take on “The Grid” incorporates treated dialog in a decent, if minor, reading; Bridges’ vocals are slightly slowed down so that he sounds like Laurie Anderson in a particularly baleful mood.

“Adagio for Tron (Teddybears Remix)” and Boys Noize’s “End of Line” both surprisingly tip a hat in the direction of Jean-Michel Jarre, with the former also including the fat bass-synth lines so beloved by the likes of Deadmau5.

“Derezzed,” pretty much the only thing on the original release that could be described as “breezy,” is made even more so by Avicii and especially the Glitch Mob. But a various artists approach to remixing so-so material isn’t going to be adding to anyone’s … uh, legacy.

The ChemBros fare much better on Hanna, which opens this Friday and asks us to buy Saoirse Ronan—taking a break from would-be Oscar bait like Atonement and The Lovely Bones—as a cold-blooded teen contract killer, alongside Eric Bana and, somehow, Cate Blanchett. But however risible that film turns out to be—and advance word isn’t good—the Chemicals have delivered an atmospheric soundtrack that doesn’t forget to rock at times: The opposite tack of DP’s Tron, and a pleasant surprise after the Brothers’ own snoozy last studio effort, Further.

A child-like theme introduced in “The Devil Is in the Details” runs throughout the album, cleverly addressing the film’s theme while inputting plenty of ominously dark chords on brief, woozy titles like “Chalice 1” and the echoey, liquid “Special Ops” to underscore the fact that this is serious business.

Hanna is an unsettling aural experience, with a listener never sure of where he’s at: Sirens and happy-go-lucky whistling vie with computerized voices muttering “Rock the beat” on “The Devil Is in the Beats,” almost like it’s 1999 again; “Escape Wavefold” stutters upwards toward an almost painful blast-off before settling into a now-you-hear-it/now-you-don’t mid-tempo, playing about three different types of tension against each other. Parts of “Container Box” even flirt with the James Bond theme.

Hanna is a playful subversion of action-film scores that also manages to be suspenseful and brutally straightforward when called for. I can’t say it’s completely convinced me to go see the film, but it gives me hope for the ChemBros’ future. DP, meanwhile, seems to be stuck in a future dreamed up about 20 years ago. I know where I’d rather be.