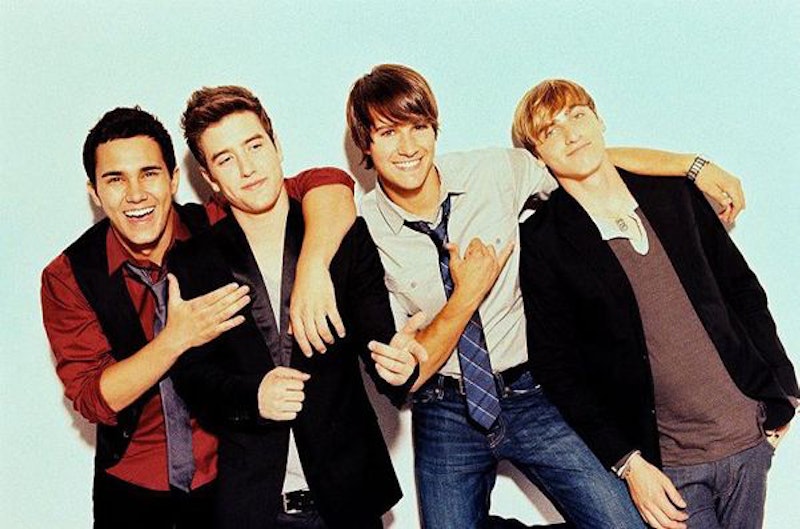 One of the infrequently recurring (and not especially enjoyable) surprises of adulthood: the discovery that it’s still possible to loathe something or someone with an intensity so palpable that it almost has its own pulse, to be rudely snapped from one’s own personal constellation of hang-ups and emergencies whenever that something or someone drifts into one’s orbit.

Among my four-year-old son’s present obsessions is the inane-yet-oddly absorbing animated program SpongeBob SquarePants, which airs constantly on Nick Jr. Which means our DVR is jammed with SpongeBob episodes. Which means that SpongeBob is frequently on in our home. Which means that unless my wife and I are quick with the remote control, we wind up having to grin and bear it through a great many promos for Nick Jr.’s live-action slate of shows, which are invariably insufferable.

Which means that I’ve heard endured Big Time Rush’s syrupy, soulless “Boyfriend” about five million times over the last few months: more often than I’ve willingly endured any other pop song I couldn’t stomach at any other point in my 34 years of life.

The lyrics are an artless jumble of hip, pre-teen mixer banter looped beyond inanity and out by way of boomerang to some special suburb of Hades where all the dudes have helmeted Justin Bieber do’s and all the chicks genuflect at Kim Kardashian’s every runway appearance. Then there’s that chorus. That chorus is simply the worst. That titular mass-mewl undergoing serious chopping and screwing, this DJ cross-cutting shit, so that the word, “boyfriend,” is both longer and more obnoxious than it ever seemed before—more annoying than people who should know better calling one another “lover,” more annoying than the Spice Girls, than David Cross—stretched and protracted like taffy through the gears of some infernal teen-pop marketing machine.
(Did I mention that Snoop Dogg raps on this song? No? Well, Snoop Dogg raps on this song, which—for better or worse—places Big Time Rush within seven degrees of pretty much every other pop entity on Earth.)

I would like to be able to say that “Boyfriend” is endemic of many of the more prevalently bankrupt musical trends of our time; if it were, I could derive some satisfaction that I was despising a great many pop-culture annoyances with something approaching efficiency. In truth, though, it’s a throwback to early aughts boy-band cheese-sleaze, late aughts Autotune abuse, and Screw music’s aughts-spanning ubiquity, which might go part of the way towards explaining its expansive, insidious awfulness: “Boyfriend” forces a captive audience to simultaneously relive the last 10 years of its life while whittling toothlessly away its rapidly dissolving future, and it’ll be in repeat in every lounge when we make it to Hell.