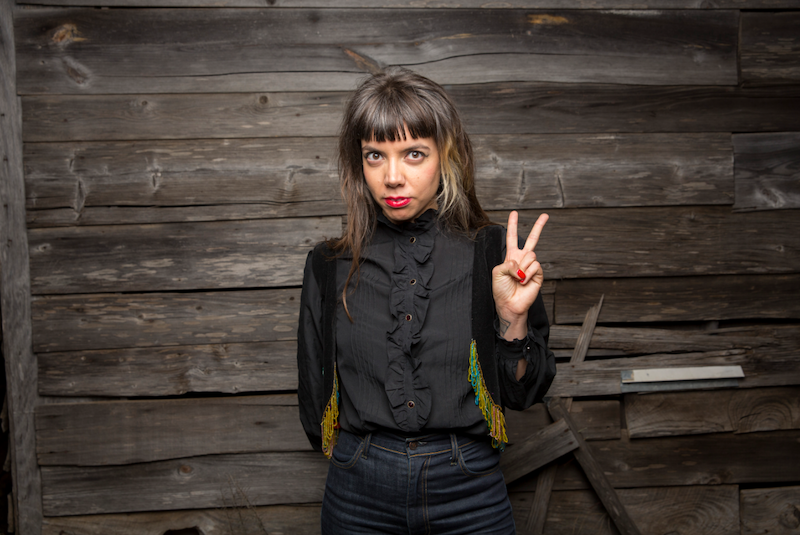 "I got hurricanes/and big Danny is wasted/he said I'm the sweetest thing/oh, that he's never tasted," Alynda Lee Segarra sings on "Livin for the City," the first full length track on her new album The Navigator. The music is a folk strum drone, and her voice settles into an easy talk-singing rhythm—hooky, cool, pop, art. It's got the uptown/downtown art school folkie swagger The Velvet Underground—"Sweet Jane" via Dylan, or "Sweet Jane" sung by someone who is fully aware of how much Dylan influenced Lou Reed. "Fourteen floors of birthin/and fourteen floors of dyin" could almost be a lyric cut from "Hard Rain's a Gonna Fall."

Segarra has never hidden her influences. Hurray for the Riff Raff, the name of her band, is broadly a folk rock outfit, and in the past she's covered songs like "Black Jack Davy," associated with Dylan mentor Woody Guthrie. Still, Lou Reed wasn't the touchstone I expected when I first listened to the album. The Navigator has been mostly discussed and promoted as an exploration of Segarra's Puerto Rican roots.

Segarra does use a lot of Puerto Rican touches throughout the album. The title track is a Latin ballad, complete with Puerto Rican percussion, strings, and some distorted Spanish guitar. "Rican Beach" has lyrics which couldn't be much more pointed. "First they stole our language/then they stole our names/then they stole the things that brought us fame/then they stole our neighbors/and they stole our streets/and they left us to die on Rican Beach." That's a straightforward indictment of colonialism—and of cultural colonialism specifically. Segarra is singing about having her past and her context stripped away, and about being left without a name or a people. "You can take my life/but don't take my home" she sings as the electric guitar reminds her interlocutors exactly where that home is.

Even as the album insists that Puerto Rico is Segarra's place, though, it also insists that it isn't—or at least that it isn't her only one. The song "Hungry Ghost," with its big, echoey production and its strummed pop guitar sound isn't reminiscent of Puerto Rico; it sounds like U2 or Springsteen. "I've been a heart for hire/my loves on a funeral pyre" is almost certainly a "Dancing in the Dark" nod—Segarra deftly lifts that song's hook too. The sound is way more like (excellent) 80s radio pop than it is like roots music of any sort.

The Navigator is a loose concept album, and the stylistic variation is in part a progression—the Puerto Rican influenced songs show up towards the end, while "Livin For the City" and "Hungry Ghost" kick off the album. Still, wherever they are in sequence, Segarra wrote and sings all the songs. The Leonard Cohen tinged singer-songwriter folk of "Nothing's Gonna Change That Girl" is her just as surely as the swaying island end. Segarra channels Dylan just as it's Segarra in "Pa'lante" who sings "colonized and hypnotized/be something./ Sterilized, dehumanized/be something."

"Pa'lante" is in part about how racism and sexism constrain who you can be or who you can want to be. "Lately I don't understand what I am/treated as a fool, not quite a woman or a man" is about feeling out of place and broken. But it's also likely a specific reference to the way women of color are often seen as masculine and not quite real woman.

The Navigator is Segarra claiming, or reclaiming a denigrated, colonized self; she's insisting on her own humanity and value. But at the same time, the album is adamantly not an exploration of Puerto Rican traditional song. Segarra is Puerto Rican, but she's not just Puerto Rican. She loves VU and Springsteen and gospel quartet music, too, if the lovely opening track "Entrance" is any indication. The Navigator is about touching back on her island, but it's also about having a boat which will take you anywhere. The United States, at this bleak moment, is eager to tell marginalized people who they are. The Navitgator, though, shows that Segarra's culture is whatever she wants it to be.