Riot Grrl, Then and Now

I grew out of the music of my youth, but I remember its appeal. 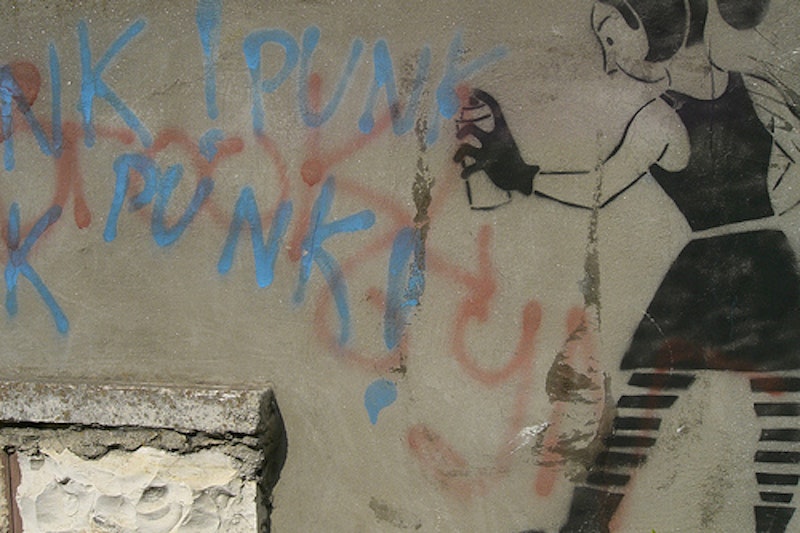 To the untrained ear, riot grrrl music sounded like tone-deaf girls shrieking obscenities into a microphone. To alienated teenage girls’ ears, however, it sounded like a revolution.

Riot grrrl was an underground punk movement: it was a subculture, an ethos and a music scene. Riot grrrl's most celebrated musicians were novices with little musical experience who compensated for it with enthusiasm and a powerful feminist message. It may have been mediocre music, but riot grrrl gave young women a place in the greater punk scene, an arena from which they had traditionally been excluded.

Like thousands of other teenage girls coming of age in the early 1990s, I first caught wind of riot grrrl via Sassy magazine, where Bratmobile guitarist Erin Smith had interned. Bratmobile's 1993 album Pottymouth was mind-blowing for me. Much like the Ramones singing about wanting to sniff glue, Bratmobile carried the punk torch in singing inane lyrics that sort of addressed deeper issues. "We're so cool yeah, yeah, fuck you too, cool schmool," they sang in the song "Cool Schmool," and I was entranced. Finally, a band that spoke my language.

Having spent most of my life listening to slick studio productions by Vanilla Ice, Nirvana and Debbie Gibson, I was gobstruck the first time I listened to Pottymouth. With no particular musical talent to speak of, Bratmobile managed to make an album that inspired legions of girls to start bands and write bold statements on their shirts with Sharpie markers. This is what it would sound like if all of my 13-year-old friends and I had a band. It was unabashedly adolescent and snotty, just like I was.

Listening to Bratmobile opened up a whole new world to me, as well as introducing me to countless other bands. Later, when I was in high school, I went to see Sleater-Kinney play at San Francisco's Epicenter Zone. The Epicenter was a record store and a tiny all-ages music club. It was incredibly youth-centric, as was the riot grrrl movement that had been the backdrop for Sleater-Kinney's creation. Sleater-Kinney was formed during the tail end of the riot grrrl movement, and stood apart from other bands in that they had serious musical chops and crossover appeal. By the time they broke up in 2006 they had received widespread critical acclaim, much of it from male rock critics like Greil Marcus, but that night, in 1995, the Epicenter was filled with teenage girls.

I stood up front in my Dr. Marten Mary Janes and crossed my arms uncomfortably, bobbing my head awkwardly to the music. I didn't know what to do at a show like this—I was used to being pressed uncomfortably against a sea of men, spending my time trying not to get hit by the mosh pit or groped. But this was different. The music was just as angry and insistent as any of the other punk shows I had ever been to, except that here I was accepted, I was safe. I think it's hard to remember how self-conscious and even frightening, being a woman at that age is. That night, though, I was able to delight in being a teenage girl.

The Sleater-Kinney show was one of the first spaces I had been in that seemed to help relieve some of the uncomfortability of being a girl, if only because of the nearly all-female audience and the fact that I was about a foot away from the band. "Girls up front" was something that many riot grrrl bands took seriously—they would disband the all-male mosh pits and encourage girls to move closer to the stage. Most girls, myself included, had grown used to associating creeping towards the front with increasing acts of male aggression and were thrilled to get to finally get to have unobstructed views of our favorite bands.

The riot grrrl scene gave teenage girls access to feminism, a word that many didn’t fundamentally understand or had been taught was derogatory, something to be avoided.  Feminism seemed like something that was rooted in a former time and belonged to our mothers and grandmothers. Riot grrrl, though, was feminism designed for a young audience. Feminism and access to the male-dominated punk scene were riot grrrl’s most obvious focus, but so was fighting racism, classism, homophobia, domestic and sexual abuse, ageism, sexism, and eating disorders.

Although detractors have pointed out that the riot grrrl movement was comprised almost entirely of white, middle or upper class women in their teens and early 20s, it nevertheless inspired those same young women with political awareness that they may not have been exposed to in the suburbs otherwise. So maybe I wouldn't go to a Gay-Straight Alliance meeting today (my own teenage naïveté is sort of adorable now) but being exposed to the politics that I was as a teenager positively shaped my political beliefs as an adult.

In addition, riot grrrl gave us something to do. Hundreds of girls were publishing zines, which usually involved a lot of glue sticks and Xeroxing. They were the blogs of the pre-broadband generation where girls cut-and-pasted drawings and wrote stories about their lives. They were starting bands and doing stand-up poetry and screen printing t-shirts and reclaiming words like “whore” and “slut” by writing them on their stomachs in magic marker. They were eschewing the usual teenage hobby of taking drugs in favor of destroying the patriarchy and making out with each other.

More than just a feeling of empowerment, riot grrrl created a community. When I went away to college at 17 I was terrified. On the first day, as I sat waiting for my roommate to arrive I flipped through the pages of The Village Voice and saw a listing for a Sleater-Kinney show, a small comfort. When the girl across the hall starting moving her stuff in, I took note of her choppy a-line bob fastened with a bobby pin and giant creeper shoes and with feigned casualness, went and stood in her doorway. After introducing myself, I asked if she liked Sleater-Kinney. Like, duh. As it turns out, Fran played the guitar and her Long Island band, The Rulers, had opened for Sleater-Kinney earlier that year.

A few weeks later, as an assignment for a web design course, Fran and I started creating a fan site called The Sleater-Kinney Media Empire. When we heard that a girl at Syracuse University had somehow managed to get the university to put on a show with Sleater-Kinney and Lois, an Olympia folk-punk musician, as part of the "Symposium on Women in Rock," we drove eight hours, in what could be considered a riot grrrl pilgrimage, to see them. It is with great shame I admit that I wore a shirt that Fran had screen-printed in her high school art class that said "I hate danger, I love fucking"—the name of a Bikini Kill 7"—and a Harley-Davidson cap to the gig. I look back on this ensemble with a mixture of awe and shame; I must have thought that is what one wore to these sorts of feminist events.

The DIY, anti-celebrity ethos of riot grrrl gave us unique access to our favorite bands. The scene was so small and welcoming that because of our fan site, we put on the guest list for all of Sleater-Kinney’s shows. Nattles of the Cold Cold Hearts made me a t-shirt. Squid, the bass player of the Lunachicks and also a tattoo artist, tattooed lines of cartoon skulls that Fran had drawn across my back. When we went to Portland, the burgeoning queer-punk mecca, we stayed with a zine-maker and the queercore band The Third Sex. Just days ago I had been listening to their album, and now their drummer, Killer, was making me banana pancakes for breakfast. Later, we drove to Olympia, the riot grrrl motherland, and found that Sleater-Kinney’s publicist had left us a package with an advance copy of their upcoming album for us. It wasn’t because we had done anything particularly important, it was just because we were there and we were excited. And that was what I loved about the girl punk scene: it was inspiring and accessible.

But there were things I didn’t love, too. After riot grrrl started to fade out, the queercore scene was still going strong and straight girls were often taken less seriously, as if you couldn’t be a feminist if you were still screwing men. It became more about identity politics and less about fun and music. But even the music started to lose its appeal as I got older.

In retrospect, maybe the music was lousy, but that's exactly what was so terrific about it. It was loud, it was fun, it was girls shrieking "fuck you." It was rebellious and inspiring and gave me encouragement to try creative endeavors of my own. But as an adult, I find the bands of my girlhood—Bratmobile, Heavens to Betsey, Bikini Kill, Excuse 17—nearly unlistenable. That may be because I’ve already gotten what I needed from riot grrrl, and can now keep those fond, nostalgic memories far away from my stereo.