Tim Fite makes some of the most exciting (and free!) American music available. But seriously, what a weird guy. 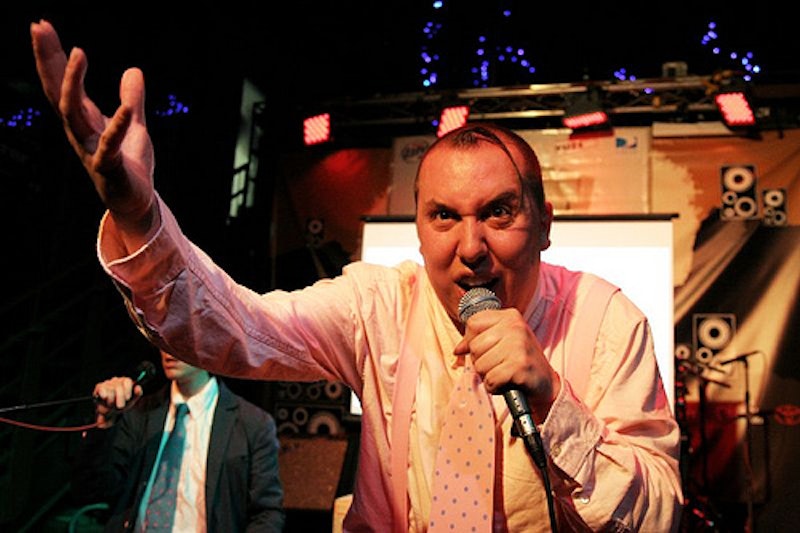 Photo from Andy on the Road

There's no pinning down Tim Fite. The Brooklyn-based artist, formerly one-half of the hip-hop group Little-T & One Track Mike (known only as One Hit Wonders for their song "Shaniqua Don't Live Here No More”) who broke up in 2002, now releases bizarre mix-genre albums that stack and bend synths and eerie 1980s-Tom Waits instrumentation into beautiful sorts of sound collages. His 2007 album, Over the Counter Culture, Fite's indictment of consumer capitalism, was given away for free download on his website and was included by many critics on their Top 10 Lists for that year. Chicago Tribune critic Greg Kot said, "One of the best albums of 2007 can't be bought."

Fite, despite putting out two records on Anti-, has for the most part continued to take the route of free musical releases, Two Minute Blues and his most recent, Change of Heart, for example, and his lyrics have continued with clever criticisms of social and political inequity—"Roots of a Tree," the first song off last year's Fair Ain't Fair, opens with the lines "Fair ain't so fair, fuckers/There's folly in the porkfat/The devil needs a doormat/for his dirt." When asked by ConcertLiveWire.com in an April 2008 interview how he would ideally like to make a living off his music, Fite said, "I think that it would be real nice to set up a subscription plan where people could subscribe for a year and in that year get full access to what I am making as I make it. That kind of directness between the maker and the buyer would be ideal for me."

If Fite's music is some oddball pop mash-up, his stage persona is something different altogether. Fite looks like a hayseed mix of David Byrne and Pee Wee Herman, clad in oversized, rolled-up suspenders, buzz cut except for a tassel of hair hanging down over his forehead. One Austin music documentary maker, interviewing Fite after a CMJ show, asked, "What's with the retard schtick?" A YouTube commenter asks, "Does Tim have autism or some kind of birth defect or somethin’?" That's much the same reaction I had when I saw Fite at Christian Kiefer's 43 Songs for 43 Presidents concert. More than a dozen great bands played and I missed filming by far the best performance of the night, Fite's take on "Bees and Honey," because I wrote him off by his outfit when he took the stage. But it only took that one song for me to turn into a Fite fanatic.

He mostly tours solo, his pre-recorded drum tracks and distorted back-up vocals all mixed into a number of effects boxes. Fite, repeatedly and perfectly, starts and stops and layers tracks while singing. His music videos often feature his original animated drawings, such as the video for "Big Mistake," and in addition to his regular YouTube program, Gunshow, Fite, before the release of Fair Ain't Fair, made a number of YouTube videos showcasing his interest in video production and mixed-media, and only adding to his outlandish persona.

Recently back from an Australian tour, Fite is now finishing up the last of his US stretch, with his final show tomorrow night at D.C.'s Black Cat, a concert which I'll be front and center for, so watch for original Splice videos of the show posted over the weekend. And in case you just can't get enough free Tim Fite, check out the two Daytrotter sessions Fite did last year, here and here.