A better official bootleg series than the gospel years. 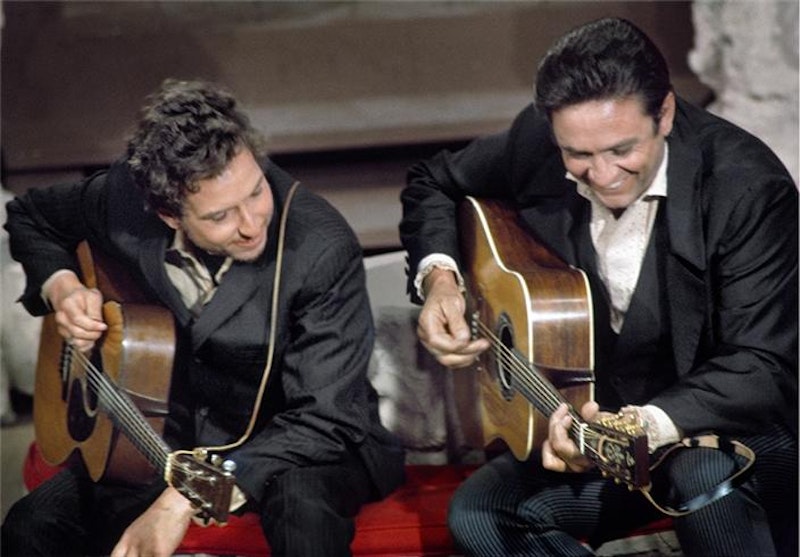 I wouldn’t think there’s much left to say about Bob Dylan’s Nobel Prize for literature, his delayed response to the touchy committee in Sweden, and then the surprised winner’s message that he wouldn’t be in Stockholm on Dec. 10 to pick up his award and money. I continue to believe that Dylan—whose “literature,” meaning just his song lyrics, pales next to Yeats, Eliot, or Pynchon—is a touch embarrassed by this latest accolade that he’s picked in the last decade or two, as the 75-year-old’s legacy builds.

Yet The Wall Street Journal last week ran a front-page story on Dylan and the arts world brouhaha. Headlined “Bob Dylan Is Blowin’ Everybody Off, but Minnesotans Don’t Mind,” Gabriel T. Rubin’s story did go beyond the Nobel and wrote about people in Duluth and Hibbing—he was born in the former town, and lived in the latter until he left for New York City at 18—who make some cash by giving tours to all the sightseers who flock to the area. Gov. Mark Dayton has declared Dec. 10 as “Bob Dylan Day” in Minnesota. Nothing wrong with making a buck.

Meanwhile, Sony Legacy has just released a 36-CD box set of Dylan’s legendary 1966 tour, which is baffling to me, since although I love “Tell Me Momma,” I don’t think I need to hear it in 36 barely distinguishable versions. There’s also talk that the next Bootleg Series will be devoted to Dylan’s gospel years, a purchase I won’t make, thanks.

I guess the Dylan cupboard of unreleased songs is almost bare—though I still believe that somewhere there’s a demo of his ’65 song “Love Is Just a Four-Lettered Word,” covered by Joan Baez, even if the story goes that he doesn’t even remember writing it. Anyway, there’s an unheard batch of songs, except on bootlegs, of which I own one, that would make a splendid release: the two-day recording sessions of Dylan and Johnny Cash from February of 1969. It’s not polished, and Dylan forgets some words at times, but the 15 songs the friends completed—some Dylan and Cash originals, plus a few 50s tunes that Dylan grew up listening to—are a glimpse into what he was doing during his self-imposed exile after he abruptly stopped touring in the summer of ’66 after what’s now acknowledged as a minor motorcycle accident.

Dylan’s voice had of course changed, as was evident on John Wesley Harding, a purposeful re-invention, and the Dylan/Cash rendition of “One Too Many Mornings”—a blistering rocker on the ’66 tour—is excellent. That the song underwent three surgeries from ’64-’69 is just further proof of an artist who refused to play by the rules. Better yet are the collaborations of Cash’s classic “I Still Miss Someone” and “Guess Things Happen That Way,” with Dylan singing in a reverent tone, not messing around with Cash’s original hits. The pair runs through “Matchbox,” “That’s Alright Mama,” “Big River,” “Ring of Fire,” “Girl From the North Country” (released on Nashville Skyline), and a few gospel tunes that Dylan has a bit of interesting trouble with. There’s also the banter between the two, who apparently had a ball playing together. And this official Bootleg Series could include Dylan’s appearance later in ’69 on The Johnny Cash Show, singing “I Threw It All Away,” “Livin’ the Blues,” and “Girl From the North Country.”

It’d be a slim release, but one that Dylan fans, old and young, would snap up.