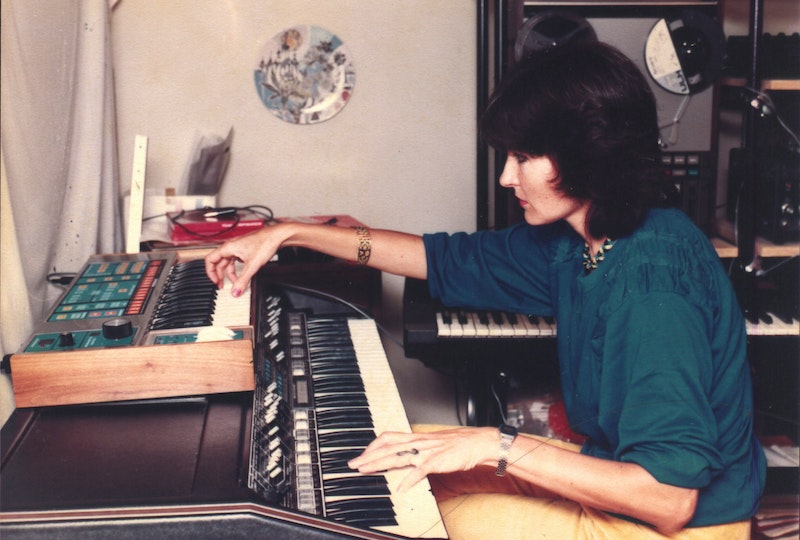 Pioneering Venezuelan electronic musician Oksana Linde has released her first album on Buh records. Aquatic and Other Worlds collects tracks from 1983 to 1989, exploring the overlap between New Age ambient restfulness and abstract noise.

Linde was a researcher until the early-1980s, when health problems forced her to retire. She turned to painting and especially to music, setting up a home studio with a Polymoog synthesizer, a 16-channel mixer and additional equipment over time. Between 1984 and 1996, she created about 60 pieces, playing and programming all the instruments herself.

Linde’s career has some parallels with other female synth artists like Delia Derbyshire and Suzane Ciani, and she’s also linked to the Venezuelan electronica scene of Ángel Rada, Miguel Noya, and Musikautomatika. But electronic music in the 80s was getting big enough to provide multiple overlapping contexts. A track that provides an unexpected entry point into Linde’s work is “Orinoco.” Enya’s majestically elfin and synth heavy single “Orinoco Flow” was released in 1988; it’s possible that Linde was responding to that global hit about a Venezuelan river. Either way, Linde’s take on the theme starts out in a similar inspirational vein to Enya’s song; the opening notes surge and swell, evoking light on the water and pulsing rills and ripples. As the track develops, though, darker, more dissonant eddies take over. The washes of sound disconnect from melody, catching at horror movie quavers. Tones are more piercing. The undulating figure at the core of the song never entirely disappears, but it’s driven down deeper, the shadow of a fish almost lost in the silt. Enya makes the electronic instruments imitate the splash of water in a celebration of nature. Linde turns the water into a mysterious cyborg, as nature fuses with its representation in circuits and sound.

My favorite piece goes even further from listenability. “Viaje hacia la luz,” or “Journey Into the Light,” is a gesture towards transcendent uplift and an annoying exercise in eardrum scraping—an odd five-minute hybrid of Vangelis and Xenakis. Linde orchestrates triumphant chords that start to head for inspiration, but then sustain too long, and are overwhelmed by the next rush of keyboard monumentality. The light lifts you up and then gently fries your corneas. The track is a long way from the blast of Harsh Noise Wall, but beneath the undulation you can hear the electronic lungs gearing up to howl in that direction.

The rest of Aquatic and Other Worlds is less aggressive. “Psicocatálisis” is Linde at her most psychedelic, with swirling reverb and space-age effects that would fit well as the theme music for a more saturated Doctor Who. “Mariposas Acuáticas” flutters in short colorful flights like the butterflies of the title; “Descubrimiento” morphs and swells like a flower blooming in a slow motion nature doc. “Playa Caribe” is the closest Linde gets to dance music; the beat won’t set your foot stomping, but you can see people out on the floor swaying to it dreamily, arms in the air.

It’d be a stretch to say that Linde’s music is groundbreaking or unprecedented. Her sound’s in line with much of the library music of her day, and Aquatic and Other Worlds is hardly as bizarre or arresting as the work of contemporaneous pioneers like Francis Bebey, African Head Charge, or Beverly Glenn Copeland. But Linde had a good ear for the possibilities of the synthesizer, and quietly but fertilely explored some of electronic music’s idiosyncratic byways.