On Eilon Paz' Dust and Grooves. 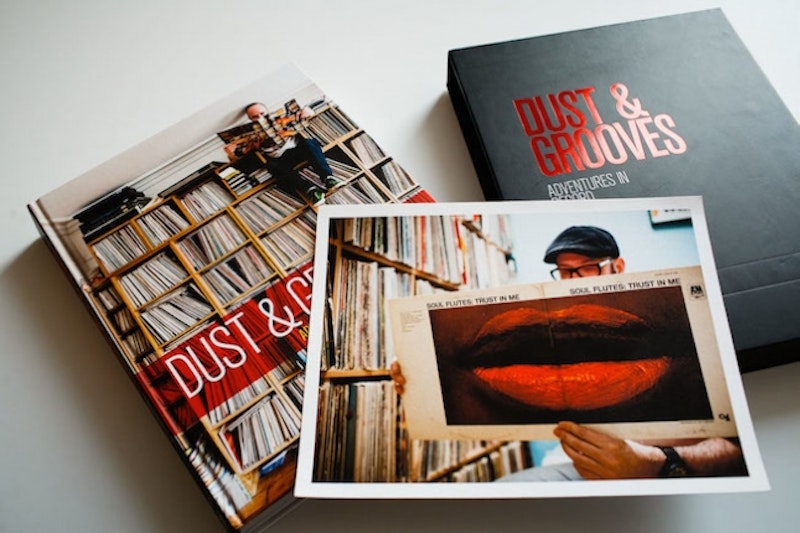 Dust And Grooves, from photographer and record collector Eilon Paz, explores the nature of obsession—in this case, vinyl records. The official book of April’s Record Store Day, it’s 416 pages, aiming for a coffee table near you. Dust And Grooves is something to be displayed as much as it is read.

The book contains photographs of collectors with their prized possessions and conversations with vinyl-heads. Some of these people are relatively famous: Wu-Tang producer RZA, the English DJ Gilles Peterson, Four Tet. (Mixes from contributors, both the prominent ones and those less known outside of collecting circles, can be heard here.) Dust And Grooves’ two forewords establish its tone immediately. RZA declares, “Science says the human ear cannot differentiate between analog and digital… But I do not agree.” Jeff “Chairman” Mao builds on this: “You hold in your hands a beautiful, lovingly-constructed and heartfelt celebration of a senseless and punishing neurosis… Contrary to what conventional wisdom would have you believe, however, record collecting isn’t about music…Having a record collection is about having records.”

After that, it’s a record-oriented free-for-all. Collectors pose with their goods. One vinyl-accumulator perches on the top shelf of his stash because “The soul 12-inch section…doubles as a handy chair.” The camera provides an opportunity to show off the most visually arresting possessions: records that have been pressed with serrated edges and in star shapes, or have unusual labels, like the remarkable optical illusion label on the Argentinian 7” version of Manfred Mann’s “One Way Glass.”

The photos are beautiful, the record jackets are pretty, the apartments are gorgeous. How do these people fund their habit? High ceilings, exposed brick, nice walls—often adorned with snazzy posters or more records—and polished hardwood floors are the norm. Some of this is like a movie set, candy land for vinyl fiends.

Dust And Grooves isn’t the only book thinking about tangible sound collection these days. The recently released Records Ruin The Landscape explores the way that the availability of recordings has warped perceptions of experimental music. This summer brings Amanda Petrusich’s Do Not Sell At Any Price, a book about the world of 78 record collectors. (She spends time with Joe Brusard, a famous 78 hoarder who appears in this book as well, toting strong opinions about the ways that rock and roll destroyed everything good.) The new, digital world is upon us, so looking back—for nostalgia’s sake, as well as for possible lessons about how to deal with the future—is in vogue.

Fantasy and expensive fetishes? Maybe. But sometimes it becomes more than that. Eothen Aram Alapatt (Egon), who works at the label Stone’s Throw and founded Now-Again Records, says in his interview, “I got my job at Stones Throw due to my record collecting… it’s how I befriended Madlib, DOOM, and Dilla and how I was able to start Now-Again. It made everything possible for me, and I never forget that… I’m very conscious of this passion of mine which has given me everything that I’ve ever wanted.” He did what he loved, and everything worked out. Screw science and conventional wisdom.