Modest Mouse’s Strangers to Ourselves is claustrophobic and confused. 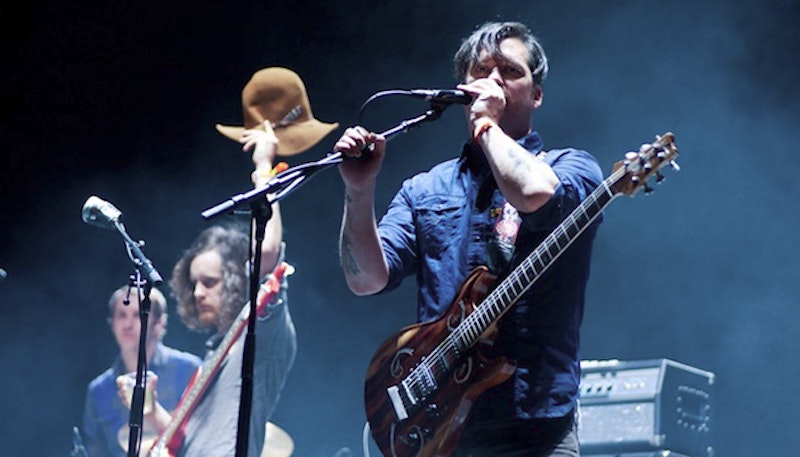 At the beginning of 2005, I stopped playing video games and became an obsessive music fan, spending all my time reading about bands on the Internet, devouring all the material that never made it to MTV and that Kurt Cobain hadn’t already praised. I had lots of Nirvana bootlegs and for a while little else could hold my interest for an entire album. Radiohead was next: I remembering going to a Borders in Midtown Manhattan with my dad to buy Hail to the Thief the day it came out. I learned what the word “pretentious” meant on the cab ride home when my dad saw that every song had an alternate parenthetical title (I thought it was cool). Hearing Kid A, Amnesiac, and OK Computer on recommendation from a cool camp friend the following summer invigorated me and led me to this endless well of excitement. Around the same time, I discovered At the Drive-In and The Mars Volta through the video game message board I lived on for three years, and was completely oblivious to their work and the fusion of music they were making. They became as crucial to me as Nirvana and Green Day, but during that honeymoon period, no one moved me like Modest Mouse.

I liked “Float On” but dismissed them as a novelty act because the video was so ugly and looked identical to “Take Me Out” by Franz Ferdinand. Out of context, the song came off like Coldplay, anathema in 2004. The video for “Ocean Breathes Salty” made me realize they were a serious band, and that Isaac Brock didn’t really have a mustache. It was a stirring, beautiful butterflies feeling, not just the music, but on the cusp of puberty, Brock’s lyrics were more profound than any poetry I’d ever read. A lot of The Moon & Antarctica sounds corny to me now—“Where do circles begin?”—but Brock’s songbird melodies and meditations on outer space, atoms and human behavior floored me. It was such an amazing feeling, a surge of enthusiasm that people spend the rest of their lives chasing back, and it was equally depressing when that precocious curiosity diminished quickly after high school. Sticking with old obsessions and unable to see or hear bands without feeling competitive or jealous as a musician, I don’t know if I’ll ever have that same pulling of the curtain experience with anything ever again.

I never soured on Modest Mouse, and thought their last album, 2007’s We Were Dead Before the Ship Even Sank, was much better than Good News: rocking, concise, hooky, and sharp, with little of the riverboat bullshit like “Dancehall,” “This Devil’s Workday,” or “Satin in a Coffin,” and most importantly, big barrels of beautiful melodies and boss riffs. They were better than ever. Then eight years of scratch, aside from a filler EP of previously released material in 2009.

Modest Mouse’s new Strangers to Ourselves is the worst you can expect from such a long gap between records: it doesn’t have a thematic voice like all of their other albums, and there is so much tuneless dross that just plods and sludges into another riverboat mess. Brock is still hollering about the plants, animals, land, air, God, Indians and regrets, but it’s a bland, confused mess, clearly the product of years spent in different studios all over the world with changing members and producers. Drummer Jeremiah Green said as much about the tedium of making Strangers to Ourselves: many songs, like lead single “Lampshades on Fire,” were attempted in dozens of versions and arrangements and styles, and yet they still suck. “Lampshades” is a lame pastiche of Modest Mouse’s past, every melody, overdub, harmony, and lyric sounds Xeroxed over.

I’m glad Isaac Brock wants to put out another record “as soon as legally possible,” because this is obviously a failure by studio bloat and fatigue. I don’t think he’s run out of things to say or write quite yet—the first song, “Strangers to Ourselves,” is one of the best things the band has ever made. It’s a stunning and sparse song, anchored by melancholy see-saw strings and Brock’s cooing vocals, decorated in ring modulated guitar drop-ins and a bar here and there of organ and chimes. It’s a melodically rich sound that precedes an hour of damp din of crap. A couple of other moments of familiar Brock weirdness remain interesting: “Pistol (A. Cunanan, Miami, FL. 1996)” is an ineffable song about Gianni Versace’s murderer full of vocal effects teetering between disturbing and totally daffy. “The Ground Walks, with Time in a Box” has the immediacy and the riffs of We Were Dead, but it overstays its welcome, again repeating what they’ve done a million times before. “God is an Indian and You’re an Asshole” is the only other keeper, a nice little pseudo-sequel to “Wild Pack of Family Dogs” that you can sing along to and actually breathes. Strangers to Ourselves is claustrophobic and confused, but after eight years, any well starts to run dry.