How did Swedish music festivals come to look exactly like American ones? 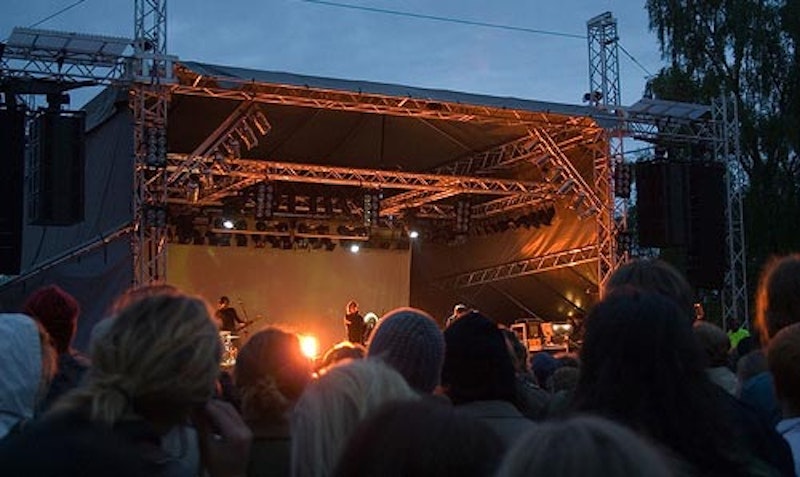 What interested me during the recent Popoganda Music Festival, and indeed what initially determined my attendance, was less the chance to see a slate of shoegazey singer-songwriters or drum-and-bass programmers, and more the opportunity offered to contrast the hipster populations of my native country with that of their Scandanvian cousins. My purpose was more of a field study than actual musical enjoyment.

The Popoganda festival was held at Eriksdalsbadet, Sweden just south of the city center, a wide park nestled amidst a swathe of greenery, dotted here and there by a series of not-quite Olympic-sized swimming pools. This being Sweden, the set-up showed a somewhat greater attempt at order than the often slapdash structure of American shows, albeit one damned by a regrettable lack of foresight. Two large stages bookended the pavilion, and centered between them a cattle pen containing a half-dozen beer tents, set off from the rest of the show by a police cordon. This had the positive effect of confining most of the plastic-cup litter and vomit to a specific area, but at the unfortunate price of ensuring that the culminating song of every set signaled a mad stampede towards the booze tarps, hordes of concertgoers cramming together, pushing and jostling in a manner which I found most un-Swedish.

The Friday night linup consisted of a slew of popular national acts headlined by MGMT. As far as most of the Swedish music went, again, it was not quite to my taste. Perhaps not shockingly given its relative proximity to Iceland, Björk seems to have set down like an atom bomb over here, permanently altering the musical landscape. Which is to say that pretty, twee-looking women, coated in particolored facepaint and clad in bright clothing seem to be all the rage. A succession took the stages, alternating between breathless crooning and sudden bursts of enthusiastic shriking, punctuated, needless to say, by the use of children's instruments. So similar were the performances than through the fog of memory I have difficulty clearly distinguishing between Jenny Wilson and Likki Li (not misspelled), two of the most popular acts within the country. But judging by the enthusiastic crowd response I seemed to be the minority in finding the whole thing a bit tiresome.

The crowd, the observation of which, as I said, was my true objective in frquenting the event, varied from their oversea counterparts in ways both foresseable and unexpected. In terms of both blondness and physical beauty, I must report a general and considerable superiority. Looking over the cheering throng was like viewing a bonus reel from Triumph of the Will, though if my impressions of the opening ceremony of the 1936 Berlin Olympics is accurate, there were fewer audience sing-alongs. Given the Swedish predilection for mistaking jeans and body paint, the men were, even more so than one would expect to see stateside, compulsively clad in pants almost certain to lower the wearer's sperm count. Also unsurprisingly given a population largely deficient in melanin, the Swedes are not great dancers, even by the standards of hipsterdom. Most swayed back and forth aimlessly, with those few attempting actual cavorting tending toward what I have come to classify as the ''Phish Spin,'' that ungainly and arhythmic twirling practiced by granola-lovers and, I am told, certain sects of Dervishes, who at least have religion to excuse their aesthetic errors.

Other aspects of the show could not be extrapolated even from a much deeper and fuller understanding of the Swedish character than I currently possess. Midway through the evening, the music paused and the audience gathered around one of the pools to watch a small collection of women perform a synchronized swimming routine. I'm not kidding. The Swedish friends that accompanied me insisted this was atypical, but I prefer to think that a lie, and will happily insist that no performance in Sweden is complete without a choreographed swim show of some kind.

Foreign though the congregation and its practices were upon first glance, closer inspection revealed a few of the archetypes common to (if not necessarily inspired by) the great American pop culture wellspring. Dotting the crowds here and there, highlighting the uniformity of the physical features amongst the rest, was the occasional pasty, dark haired girl wearing what, to the untrained eye, most closely resembles a traditional witch's costume. Though, as a whole, the men amidst the throng seemed better fed and groomed than one could expect to see at the equivalent show in the U.S., there were more than a few spindly youths who inspired the instinct to forcibly feed Big Macs until they attained a reasonable weight. With these two points of reference in view I was quickly able to distinguish further landmarks familiar to me from long hours in record stores and at independent film revivals: ironic t-shirt guy, fat man in trucker hat, the whole slew of well-known paradigms, common rebels from the mainstream.

Are these castes formed by the subculture itself, as the horticulture and geography of the land is influenced by the warm air drifting east off the Atlantic? Or would they exist even absent the Anglo-American wave which collected and deposited them here? Had the dulcet tones of Yo La Tengo and Radiohead never been transmitted to the Nordic states, would the crew of the Popoganda 2009 still be waving their freak-flag high, or would they fit in more comfortably with the rather buttondown society which surrounds them? One suspects that we look for milieus to mold ourselves into, grasping for those venues which allows our natural inclinations free reign. In other words, these champions of hipsterdom would have found some other way to distinguish themselves from their fellow Swedes. Still, it was of interest to me to discover the potency of U.S. subcultural practices, guiding and shaping the Swedish alt-cultural vibrations. There might be little reason for me to make the trip next year, other than the lack of quality underwater swimming at stateside festivals.