Is the Ukranian metal band Drudkh a fascist mouthpiece? 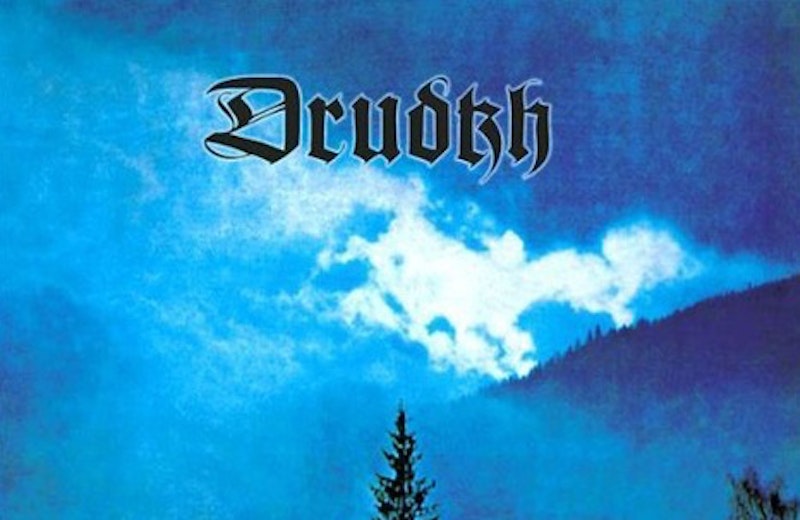 Fascism is repugnant morally, but I'm not sure the same thing can be said for its aesthetics. There has been plenty of quite decent fascist art (by D. H. Lawrence for example, or Ezra Pound) and I don't think that's an accident. Fascism is a coherent ideology with a reasonably thoughtful take on tradition (through folk culture) and innovation (through aggressive modernism). Obviously, you can be a Nazi and write lousy poetry, of course, but—unlike, say, the ideology of therapeutic self-help—the basic tenets of fascism seem like a perfectly reasonable basis for creating worthwhile aesthetics.

Of course, the basic tenets of fascism have also led to throwing large numbers of my kith and kin to the fire. To say that such immolation is a side issue seems a bit duplicitous. In fact, I think it is, to some extent the issue. The aesthetic punch of fascism, what gives it coherence and force, is, precisely, force—a unifying and apocalyptic vision. That's why fascism and metal have often come to such an easy alliance; both are obsessed with blood and strength and purity.

Which brings us to Microcosmos, the latest album by Ukrainian black metal stalwarts Drudkh. Drudkh doesn't explicitly avow fascism in its lyrics or song titles or, indeed, in its art—the Microcosmos cover features a big, dramatic sky over a stark pine forest. The band itself has adamantly denied links to fascism or any political ideology, refusing Myspace friend requests from NSBM (National Socialist Black Metal) and writing in their profile that:

a few ignorant internet warrior-fans [...] spread rumors, that the band embraces extreme political views. This is absolutely misleading and a total profanation, since there is nothing in Drudkh's music or lyrics that would suggest any political outlook. Drudkh praise individualism, self-improvement and estrangement from modern values.

All well and good. Except, in the first place, Roman Saenko, one of the founders of Drudkh, was also the central figure in Hate Forest, a band that had much more explicit ties to NSBM. Second, while Drudkh doesn't espouse fascism in its lyrics, it has repeatedly used bits of music from a film about the Ukrainian Insurgent army, a WWII nationalist group which fought both the Soviets and the Nazis, and which was involved in brutal ethnic cleansing of ethnic Poles, and possibly of Jews as well. Drudkh's lyrics are often drawn from 19th century Ukrainian poetry; not fascist in itself, obviously, but suggestive when placed in the context of a militant, possibly race-conscious Ukrainian nationalism. Even Drudkh's own protests sounds a little overdone; they praise "individualism, self-improvement and estrangement from modern values," you say? One can approve or disapprove of those goals, but it's hard not to notice that, as an ideology goes, nothing in that list is especially antithetical to fascism. I'm sure that Drudkh has various disagreements with NSBM bands; it's not clear to me that those disagreements exactly add up to an embrace of friendly liberal pluralism.

I'm not trying to make the case that Drudkh is evil and should be banned. Rather, my point is that they seem clearly to be drawing from a nationalist milieu, which is proto-fascist if not actually fascist. And, moreover, it's that milieu which gives their music its inspiration and its power. Microcosmos starts out with a Ukrainian folk tune on traditional-sounding instruments, and the whole set has a definite folk tinge-the riffing sonic blast on "Distant Cry of Cranes," for example, is shot through with syncopation and melodic tinges that evoke traditional Eastern European music. This is made even more explicit halfway through the song, where the maelstrom falls quiet, and we get an acoustic guitar break leading into an almost funky dance segment. Similarly, the weird minor harmonics on "Decadence" (a thoroughly fascist-friendly title) point to folk sources. Even the classic rock soloing on "Everything Said Before" is under-girded by an odd, off-kilter rhythm, as if a village-full of toothless peasants had set upon and cannibalized Jimmy Page.

The album as a whole, in short, is bent on taking tradition and transforming it into an epic, menacing grandeur—folk music not as an aestheticized museum piece or authenticity-conferring touchstone, but as final future-past apocalypse. The epic nine-minute-plus-drone dirges, shot through with echoes of tradition, are about turning progress against itself; the long ago given the wherewithal, the technology, and the will to obliterate the here and now. This is music to murder modernity by, and while I certainly dislike many aspects of modernity myself, I can't quite escape the knowledge that when someone says "modernity," in this context, they often mean, in effect, "people with names like ‘Noah Berlatsky.'"

Thus, while nothing in Microcosmos' songs themselves makes you think about fascism, it's hard for me to believe that the band wasn't thinking about something like fascism when they made it. The album is open-ended enough that you don't have to acquiesce to enjoy it, but that doesn't mean that there's nothing to acquiesce to. Indeed, even for those who don't agree, I think part of the beauty of the creation comes from the fact that it is so uncompromising. Following a vision through to its logical extreme is terrible politics, but it can often be great art.