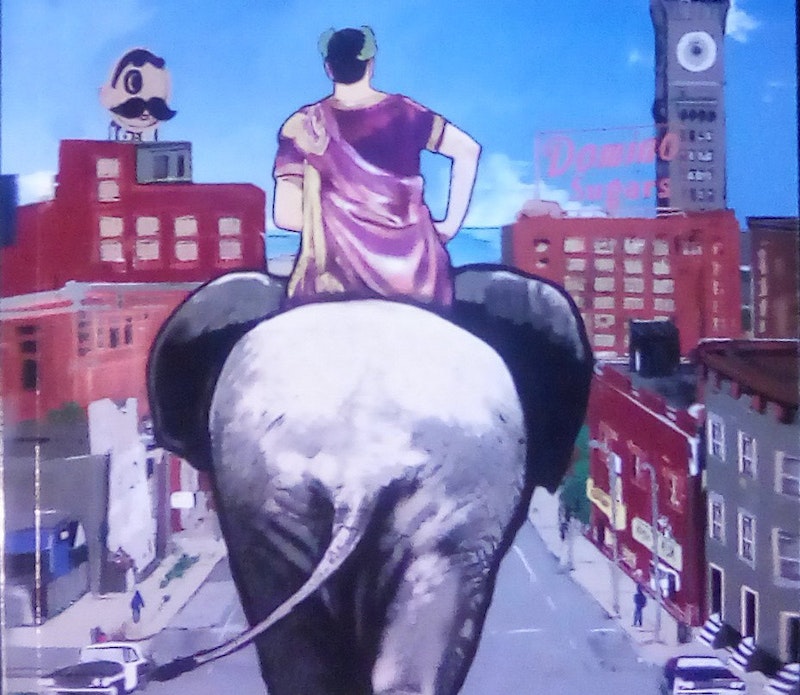 Whether you love vintage rock zines like Kicks and Mojo, fascinated by the history of electronic media, or curious about the early independent music scene, former WCAO DJ/media mogul Paul H.D. Rothfuss has you covered. R/L Publishing recently released his memoir Alias Emperor Rodgers, a document of the era when AM Top 40 radio ruled the airwaves. From all-ages record hops and stomping teen soul combos, to surreal publicity stunts, to “imperial” alter egos, to esoteric concepts like “DX'ing,” the book presents a first-hand account of a time when rock ‘n’ roll and homegrown broadcasting were conjoined at the hip. Rothfuss recently took some time to expound upon the finer points of his career.

Splice Today: My favorite part of Alias Emperor Rodgers is when you describe hosting an amateur music show on Saturday mornings, the one sponsored by a local music shop on the York, Pa. TV station WSBA Channel 43. This is an amazing example of how local media programming can be really off kilter. Can you tell me more about your time with Channel 43?

Paul H.D. Rothfuss: Being a UHF channel (WSBA) needed to pump out mega watts of power to cover York County, which it didn’t do very well. This was before the proliferation of cable TV so their only chance was to get folks to tune in “on the air.” For TV 43 I also recorded the “night book” of commercials, PSA's, station breaks, etc. I'd go to the station about 2 p.m., Monday-Friday, and spend about an hour in the studio for which I was paid $25 per week, the equivalent of $215.58 today. I also received $25 to host the music show and another $25 to host TV43 Bandstand on Saturday afternoons.

As I pointed out in Alias, the (Saturday morning) music show was pure genius on the part of the music storeowner because every parent, uncle, aunt, grandparent, etc., wanted to see their kiddos on TV—and they believed the performances of their cherubs to be fab! He was selling instruments and sheet music and giving lessons like crazy. Genius marketing. The performances were what you'd expect from start-up amateur musicians between ages six and 12. Violinists played “screechily,” the accordionists struggled to control their instruments, and the horn players played really, really loud. But the kids tried hard and were for the most part adorable and nice.

ST: Was it hard to keep things under control with so many child performers around?

PR: The parents' smiles said it all so I smiled along with them. The child performers behaved beautifully. In those days kids were “parented.”

ST: I love how you describe the 1960s promotional stunts you did for Baltimore’s WCAO and WCBM. You make riding around on an elephant through a major American city in the dead of winter wearing nothing but a purple tunic and laurels seem like an essential task that had to be done. Can you elaborate on that? Why do people need spectacles?

PR: I'm a team player. All of this was part of what I needed to do to help make our radio station successful. With rare exceptions no DJ is ever more important than the overall station performance. The key to success is getting noticed so you give 'em a “spectacle” in the hope they'll notice. They won't notice Vanilla but they may notice turpentine-flavored chocolate.

All of this was mandatory! On the air the WILQ Rooster sounded like Foghorn Leghorn. WKJN had Wal E. Gator who wore a railroad cap on his head and a corncob pipe in his mouth. Both were country stations. WINK 104 had the Tookie Bird, a wacky-sounding feathered critter that matched up well with the station's rock-oriented Top 40 format.

PR: Some, but our 'hops' were (mostly) done in catering halls and armories and were our own promotions.

ST: When you started booking a lot of the popular local soul groups at WCAO events how did you find out about them?

PR: I learned about them when they came to events asking for a gig. I asked attendees and if they roundly agreed the band was good I booked them. I was very familiar with The Admirals, Denny and the Hitchhikers, The Majestics, The Princetons, Tommy Vann and the Echos, etc., and from DC, The El Corals with the El Coralettes and El Cyd.

ST: The 1960s was a politically charged time. While all the racial tensions and Vietnam controversies were going on, WCAO was presenting these record hops and big soul concerts that were attracting huge crowds from all backgrounds and races, black and white kids from all over Baltimore hanging out dancing together in these huge venues. Did this ever cause controversy? And did you ever notice any disparities in how the black and white artists were treated professionally?

PR: Disparities? All I saw were throngs of young people of all colors flocking to the Civic Center to cheer—with equal loudness and enthusiasm—Chicago and The Beach Boys as well as The Temptations, Otis Redding and Stevie Wonder, performances for which I'm sure the artists were paid handsomely. I saw this because I was in attendance, most often as part of the crowd. Concertgoers, sports fans, art gallery attendees, etc., don’t (and didn’t) go to these events to cheer and applaud acts because of their race and/or politics. They don't give a tinker's damn about the attitudes or politics of the performers or artists or those of the person sitting next to them. Or shouldn’t. When politics gets forced on attendees of these events they simply stop coming or watching (see recent TV ratings for sports). Sports and concert crowds are great examples of how people of all persuasions and colors can gather and the questions of politics and race will never be brought up, because folks are too busy enjoying one another to bother. Beautiful!

ST: At the beginning of your second book Wiggles, Winks, & Wizards the story is a straightforward continuation of Alias Emperor Rodgers. But once we pass the mid-1970s the whole tone changes after you and Kerby Scott start buying radio stations together. It seemed like a lot of the radio industry's early spontaneity started disappearing then.

PR: The emergence of hard rock in combination with teeny-bopper garbage on the Top 40 charts drove me in 1969 from WCAO to WCBM (a “hot adult contemporary” station). Pretending to like this music whilst acting the part on the air was hypocritical to me. Besides (and I say this with all humility) I’d “grown” from being a disc jockey to being an on-air personality.

On August 1, 1975 I put Paul Rodgers in a box and got Paul H. D. Rothfuss out. Same great fun-loving personality but now wearing a suit and tie. You get it, right? When researching a market where a station was offered for sale we first searched for a format-hole. Fortunately country was often the hole.

My only concern was providing listeners, communities and advertisers with an interesting, exciting, informative radio station that was fun when fun was acceptable (most days) and ready to drop everything and go all-news when necessary. I knew if I did that the business would come. And it did.

When the financial types discovered that radio was a cash cow business (1990?) they took over the industry and commoditized it. "Ya got a 10 share of the audience? Get us a 10 or 11 share of the radio revenue. Cut everything that costs money, including staff. Just play the music and shut up." And on and on.