Be Steadwell and the R&B of failure. 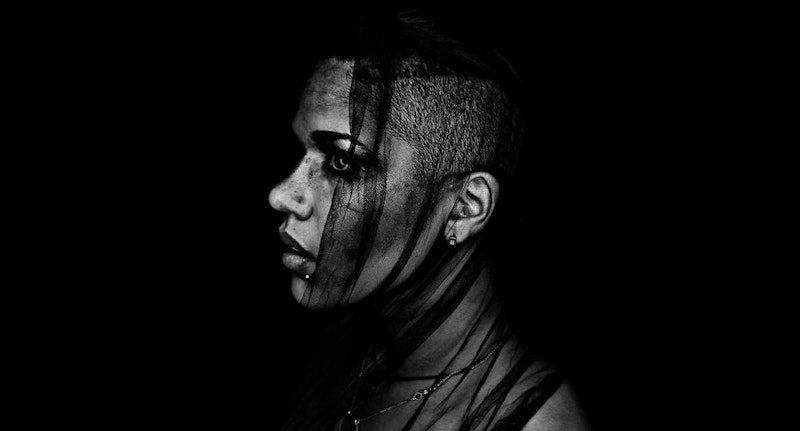 In pop, queerness is generally presented as flamboyant, extroverted, and exciting. Lady Gaga, Miley Cyrus, and Nicki Minaj all perform attraction to women as tease and empowerment. Miley sticks her tongue out and gropes her background dancer; Gaga wears a meat dress and embraces all her fans as little monsters. To be different is to be cool, uninhibited, and true to yourself. Gayness is about pride.

R&B performer Be Steadwell's independent EP Jaded, Dark Love Songs, released this January, is more open about her lesbian identity than pop almost ever is. Where Minaj and Gaga flirt and hint, Steadwell simply writes love song after love song to other women. But the greater openness doesn't read as triumphant. Instead, like the title says, the music here varies from sad, to very sad, to desperate.

The first track, "Haunted" opens with an impending breakup—"Baby when you comin' to bed, she said/I said, I don't know/Somethin' tells me this is the end/I'll stay, and she'll go." Steadwell sings it slow and measured—the pause after "stay" opens up in a blank, bleak gap. "Maybe my past will always haunt me," she says, and it's not clear if she's talking about how this relationship will hurt her in the future, or how her past pain is sabotaging her now. "I don't know" isn't just about being uncertain of what's coming, but about being unable to fit now and yesterday together. In the words of queer scholar Heather Love, Steadwell is "feeling backward." Pride turns around to see that old ghost carrying doubt and pain.

For Steadwell, that pain isn't just loss, but self-loathing. Jaded, Dark Love Songs is a strikingly insular record. Like contemporaries Kesha and FKA Twigs, Steadwell's music is sparse, with lots of space between beats and phrases, so it sounds like she's singing to herself, rather than to an audience or a loved one. Steadwell uses multi-track obsessively, looping her own voice in choruses, as if she's trapped by echoes inside her own skull.  When she pleads with her lover on "hold me," she’s begging to be rescued from her digitized selves, an aural embodiment of what she calls her "restless urge to stay alone."

Even Steadwell's humor spirals ominously inward. The standout track on the album, "Netflix," opens with precious indie cuteness. "We get in bed with the device" she sings with jazzy neo-soul insouciance, "we fall asleep by the screen light/sex is elusive on a good night/Netflix is fuckin' up my sex life." But within a couple of bars, the bottom falls out of the wry way-we-live-now New Yorker observation. The distance between ideal passion and mundane streaming service becomes a metaphor for failure at love, at work, and at everything else. "I wanta sell a million records/come back and make a girl breathless/real life, can't nobody hear me/real life, the girls don't really feel me." She concludes, "Online I'm better than the real me," a line that gets repeated again and again over a beeping electronica groove, like she's trying to turn herself into binary code, and escape her own body and desire.

These aren't songs that are directly about prejudice or discrimination. The couple watching Netflix could be heterosexual, rather than lesbian, without changing anything but a few pronouns. But the subtext, or at least one subtext, is clear. Loving yourself, much less loving other people, is hard when your love and your life are despised. "You already know I am insecure/I could never believe that I could be all yours," she sings a cappella in "the one," with just her own deepened voice providing a background hum. "Fuckin' up my posture/I'm always trying to fold/trying to be smaller/be invisible." Instead of success, triumph and strength, Steadwell's music is all about weakness, deformity, and shame.

In Feeling Backward, Heather Love argues for "the value of some aspects of historical gay identity… that have been diminished or dismissed with successive waves of liberation." One of the most important of those, Love says, "is the association between homosexual love and loss—a link that, historically, has given queers special insight into love's failures and impossibilities." In pop, everyone, but especially gay people, is always triumphing and overcoming, leaning in to self-actualization and sweeping orchestral oomph. Against that insistent celebration of progress, Jaded, Dark Love Songs functions as a quiet, retrograde anti-anthem. "You're too happy to be blue/too blessed to be so broken," Steadwell's multi-tracked vocals murmur. But, as she knows, sometimes people are broken anyway. They need someone to sing for them too.