Q: What is Noise? 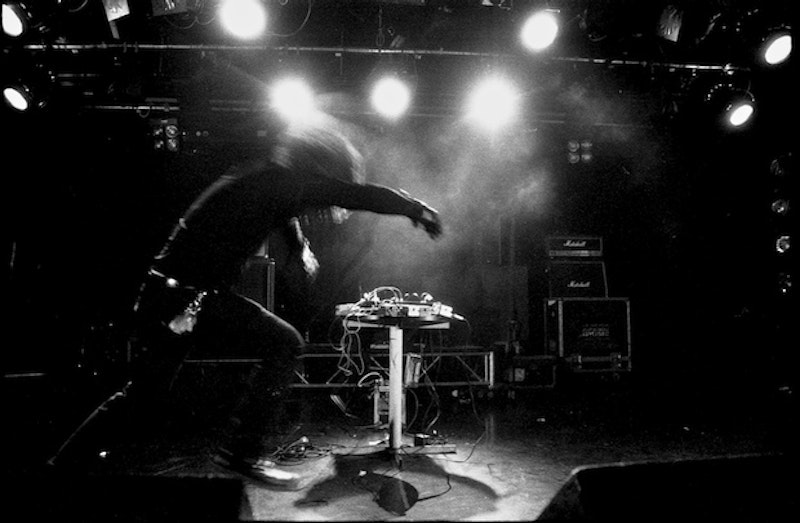 Q: What is noise?

A: The Garret Keizer definition—as understood by laymen and academics alike—would be “unwanted sound.” Something bothersome: the buzz of a fly, the clank of machinery over the next rise, a spoon caught in an active garbage disposal. An unpleasant distraction.

Q: Are you an academic, or a layman?

Q: Then who are you?

A: I am someone who believes, ardently, that noise can be desirable, cathartic, an entertainment.

A: Noise music is a form of performance or sound generation that is not concerned directly or implicitly with concepts of song structure; it is more interested in sonic textures, in extremes, in limits. Even in its least explosive forms, noise music is defiantly anti-social. Think of commonly despised kinds of noise pollution: nails scrapping chalkboards, the sputter of a failing engine, someone falling down stairs, the crackle of television static after the cable cuts out. In its purest form, noise music frames, embodies, remixes, and exploits abrupt perceptual ruptures like these.

A: Not really. “Experimental music” is traditional music with unconventional time signatures, tunings, inflections, and so on, but melody still matters. Generally speaking, “noise music” isn’t too beholden to melody, except when it’s stuffing a melody full of dynamite and blowing it up.

Q: That wasn’t really an answer.

A: So ask me another question.

Q: Does all noise music sound the same?

Q: So what types of noise music are out there?

A: Legion. There is haunted-house noise. Scorched-dungeon noise. Busted tape-deck noise. Snorkling-in-liquid-oxygen-like-in-Abyss noise. Cantilevered drones that are noise, and vice versa. Out-of-control psychopathic noise. Musique concrete in noise drag. Freakout-lava guitar noise. High-wire percussive noise. Conservatory noise, which can really be quite orchestral en route to knocking you out. Gnarly sub-fractal noise. Drone noise that’s actually super minimal. Noise built from mellow-harshed swatches of recognizable not-quite-recognizable pop-culture ephemera. Spoken-word noise. Noise built from contorted, pretzel-twisted vocals. Noise that is heavy on loops. Power noise. Power electronics, which is a totally different thing, and has implied connections to sexual deviancy. Suspended-animation noise. Buckling-bronco electronic noise. Jazz-improv noise. Squirrels-high-on-crack laptop noise. Harsh wall noise. PC-generated harsh wall noise—which is even more unrelenting somehow. Political sample-noise. Hardcore-punk noise, where the sense-data onslaught is so scarring and primal that you can’t really get away with calling it hardcore punk. Undulating swamp noise. There’s ton of promo copy out there that uses the phrase “noise pop,” but to my mind the bands in that category don’t belong anywhere near this conversation. There is broken-factory noise, which can resemble bargain-basement industrial music, like moth-eaten Throbbing Gristle demos. Way more shit that I’m forgetting right now. If you can imagine it, it probably exists, and someone in a Wolf Eyes t-shirt is generating it or wilding out to it right now. Noise rap? Noise metal? It’s been done.

Q: Where should a beginner turn to learn more about noise music?

A: Pitchfork publishes an occasional column called “The Out Door,” authored by Grayson Currin and Marc Masters; that’s a good, solid place to start. I’d also recommend The Wire—the online articles, not the over-priced import physical version—for further indoctrination into noise and out-music, and classical, and all kinds of obscure and fascinating sound worlds. Spend some time clicking around on the Forced Exposure and Raven Sings the Blues websites, and scope out discoveries on discogs.com, where you can sometimes find sound clips if YouTube leaves you high and dry—which it probably will.

Q: I want to listen to some noise jams now, just to get a feel for the genre. Is there anything you would recommend?

A: Sure. Here are a few selected favorites.

How I Quit Crack, live

Q: Is there anything more for you to teach me about noise?