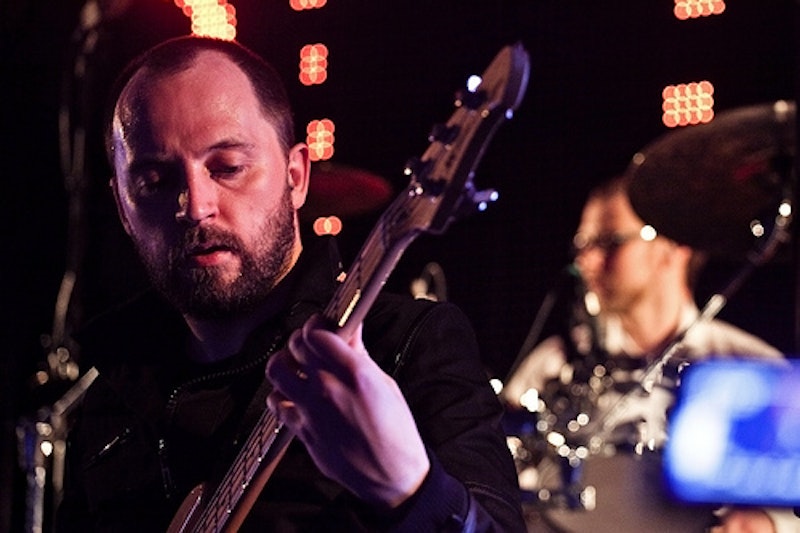 I'd heard just one album by the British IDM performer Squarepusher (Tom Jenkinsson), but that one was a gem. Music Is Rotted One Note, from 1998, starts out with semi-inaudible giggling and snorting and ends with four minutes of slow echoey doom-metal drone. In the middle is some of the most inventive, individual electronica I've ever heard. The album draws heavily on jazz and Miles Davis-like fusion, giving it a feel of improv cool that contrasts sublimely with electronica's plastic programming. "My Sound" is a relaxed, easy-listening groove with the drums and loops and bloops occasionally stuttering and spitting like a lounge-singer fighting off Tourette's. The brief "Drunken Style" sounds like Davis himself trying to perform with both a laptop and an ailing duck stuffed into his trumpet. "Chunks” is superior strutting funk right out of a sci-fi Blaxploitation soundtrack.

The awesomely preposterous "Shin Triad" opens with a giant feedback fart, goes into ambient drift, pits a titanic strutting beat against what appears to be a kazoo in a pressure cooker, and ends with a keyboard burbling to itself. Like the best fusion—and the best electronica—the album manages to be both thoroughly ridiculous and devastatingly hip, filled with geeky virtuoso flourishes and geeky amateur goofiness. Listening to it again, I can't imagine why I didn't immediately go out and buy everything Squarepusher had ever done. There's just not a whole lot of music that is this good.

So I was prepared to be blown away by Squarepusher's newest, Ufabulum. When I actually got it though, even before I listened to it, I became a little worried. Music Is Rotted Note One has a decisively uninviting cover; a microphone next to a board on which the song titles are written, all against a gray-green background; on the reverse side is a bunch of indecipherable half-crossed out writing. Ufabulum, on the other hand, shows a black silhouette of a guy with a helmet against a grid of white lights. We've gone from avant-garde idiosyncrasy to standard space-age tackiness. That can't be good.

And indeed, Ufabulum is… not terrible, but not great either. Squarepusher hasn't lost his knack for interesting beats or listenable melodies; the music is still funky and entertaining and intense, with quick shifts in tempo and ear piercing chalkboard squeals on something like "303 Scopem Hard." But the eclecticism and most of the surprises of Music Is Rotted are basically gone. Miles Davis and jazz are still in the mix somewhere, but they're often overshadowed by video games (as in the opening of "Unreal Square") or by Vangelis (the uplifting synth washes in "4001").

Which isn't a knock on video games or Vangelis. I like them both. But so does just about every other electronica musician who's ever picked up a keyboard. Ufabulum is cute and funny and pretty and assaultive. But there's no ailing ducks in the trumpet, no lounge singers with Tourette’s, no farts. At times, as on "Drax 2," all the frantic beats and the ominous synths can't quite conceal the feeling that we're just twiddling our thumbs to run out the track's seven minutes.

Pop musicians often get dull as they age, so I shouldn't be too surprised that Squarepusher's lost his way. Still, it's more of a letdown with him than with some other acts I've loved. Maybe it's because I somehow missed following his career that closely, so I could imagine that he'd just kept on keeping on through a decade and a half of badass funky burping. Or maybe it's because of the kind of music it is. Avant-garde electronica should be produced in a sealed compartment by sentient calculators with berets, impervious to time or fashion. If even Miles Davis ran out of inspiration late in his career, I guess it's unfair to expect more from the calculators.