The Land of Spirit and Light

Michael White is the embodiment of what made jazz cool, and he still plays a hell of a show. 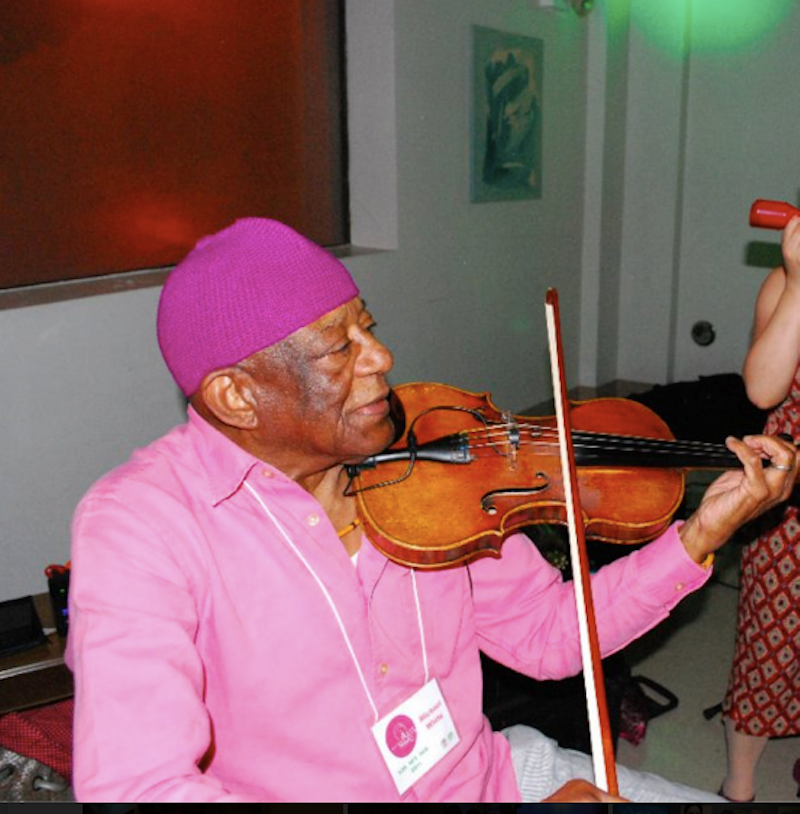 As jazz violinist Michael White, 82, sang “Let Love Be Your Magic Carpet Ride” with his Quintet on Sunday night at the Malcolm X Jazz Arts Festival in East Oakland, I leaned in my chair with my eyes closed, the sun still visible from too many glances at the solar eclipse and all I could think was… this is important.

The concert ended on a note of elation, and after I had Mr. White scrawl his blessings on the album that introduced me to his music, Spirit Dance, we spilled onto International Blvd. and I couldn’t put pen to paper fast enough to articulate why I felt what we had just witnessed was so significant. Looking at my chicken scratch now, I’m not sure there are too many revelations.

But here’s one: Opportunities to see the musicians who radically transformed jazz are rapidly diminishing. Many in my generation have never had the chance to appreciate jazz in any context that doesn’t suck all the soul and any iota of relevance out of it, and thus dismiss it as music for old people. Make no mistake, contemporary jazz, for the most part, is garbage—but contemporary popular music, especially hip-hop, is inconceivable without it. It’s part of America’s musical fabric, and Michael White was there, and was responsible for so many of the masterpieces that make up the quilt.

He recorded with pillars of cosmic jazz like Alice Coltrane and Pharoah Sanders. His band, The Fourth Way, were pioneers of jazz, rock fusion—and not the limp Jean Luc Ponty kind either. His own albums as a leader for Impulse, the previously mentioned Spirit Dance, Pneuma and Father Music, Mother Dance, to name a few, are some of my favorite albums on a label chock full of classics. When he and his quintet played the title track to 1973’s The Land of Spirit and Light, his violin sounded as vital as the day they laid it to tape.

Music is typically considered the domain of the young. With a few exceptions, artists tend to establish themselves early, perhaps go through a transformation or two, and then burn out as the next generation eschews the sounds of their parents for something they can call their own. Being part of a scene is a crucial appeal, but it’s not the only function of music. It’s exciting to see an artist in the process of discovering themselves, but it’s equally satisfying watching someone play who knows who they are, exudes confidence and has experience oozing out of every pore.

The setting is important to. Jazz is being kept alive in academic settings, concert halls and PBS specials but that’s not where it was born. There’s something about being in a small room, without amplification, that adds immeasurably to the experience of live music. On Sunday, the venue fit the intent like a glove—Malcolm’s iconic visage presided over the ceremony, evoking self-determination, while East Oakland invited a diverse crowd to pay tribute to it’s prodigal son (Michael White is from Oakland, though he currently resides in Kobe, Japan).

Jazz, especially the improvisatory variety, is an extremely honest form of storytelling. It takes a tremendous degree of skill, and an elaborate musical vocabulary to freely improvise with a group of musicians. When it works, it can be transcendent. The ultimate triumph of music is the inexplicable beauty of the moment when people, place, time and every other unseen dimension refract through the prism of human experience in a blaze of harmony, rhythm and melody.

It can put you into a meditative state. It can compel you to dance. Music can turn you on; it can put you out. It can cause you, in my experience, to devote your life to spreading its gospel.