Pathos and Peace for Pink 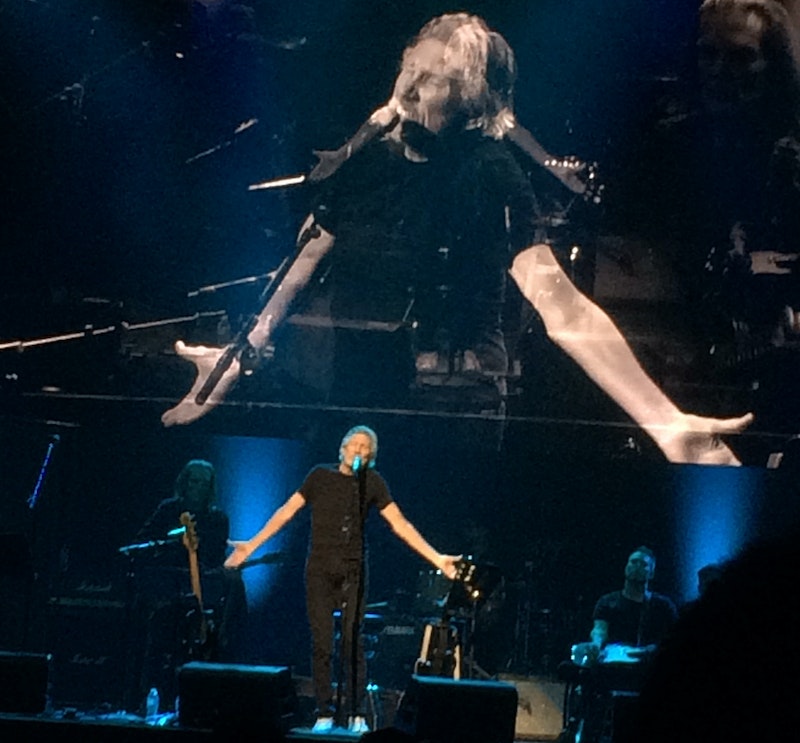 Roger Waters is a curmudgeon for good reason. When he was only four months old, his father was killed in World War II, and his grandfather was long gone, a casualty of World War I. “Ever since I can remember, I experienced the loss of a loved one,” Waters told The Washington Times last week, not that that’s news to anyone who’s heard The Wall. The pathos and paranoia of The Wall is unmatched in rock music—it’s one of the most emotionally naked and psychologically disturbing records I’ve ever heard. The pomp of the double album, world tours, flying pigs, and boring band implosion often obscures the reality of the boy who became the man behind it all, growing up mired in bitterness, rejection, absence, loss, and powerlessness.

Compared to the albums their arena rock peers released in 1979 (Fleetwood Mac’s Tusk, Led Zeppelin’s In Through the Out Door, The Eagles’ The Long Run, and Wings’ Back to the Egg), The Wall is relentlessly bleak and uncomfortable to sit through, because it’s like rubber-necking when someone has a nervous breakdown in public. It’s not as much a coherent set of songs as a sonic exorcism, full of bloat and poorly-paced (the opening song “In the Flesh?” has one of the most triumphant riffs I’ve ever heard, and this soaring overture is followed by a run of half-songs—interstitial bits and atmospheric pieces that kill the considerable momentum of the album’s entrance). Childhood trauma and loss are a dependable well in rock, but Plastic Ono Band, In Utero, Mellon Collie and the Infinite Sadness, and From a Basement on a Hill lack the empty spaces of The Wall, and are all more coherent and organized. Waters hasn’t figured anything out or even reflected—The Wall isn’t a presentation, it’s a look into the unedited thoughts of a man driven mad. His oil-slicked soul runs through the grooves.

Waters may be a misanthrope, but he’s made his millions, and his work with Walter Reed Hospital in Washington, DC and the MusiCorps program is inspiring and very anti-rock star. He’s not doing it for brownie points or political posturing—as always, the political is the personal. Last Friday, Waters led a band of over half a dozen veterans at a rousing, heavy, and immensely inspirational concert at D.A.R. Constitutional Hall. MusiCorps is an organization that encourages wounded veterans in rehab to try learning an instrument to give them something to work toward, a holistic treatment for PTSD and extreme trauma. The magic of music over morphine. This was a benefit concert with expensive tickets, and there were the requisite “special superstar guests”: Billy Corgan, Tom Morello, Sheryl Crow, and G.E. Smith. But the focus was on the vets on stage, who were introduced in interstitial videos in between every couple songs (when the lights initially dimmed and the first player was introduced through video, Waters came on stage about halfway through to rapturous applause, and he had a mini-conniption fit, gesticulating wildly for the audience to shut up and listen to the video).

These guys had their legs or arms blown off when they were just teenagers, and were lucky enough to find MusiCorps during their time at Walter Reed. Morello observed at one point that they brought the same intense discipline of cleaning and reloading their rifles to practicing and mastering their instruments. Instead of maintaining “weapons of war, they maintained their weapons of music.” It sounds hoary now, but the atmosphere at D.A.R. that night was exceptional, asshole-free and full of hope for humanity’s capacity to heal. Morello was the only guest who offered any comment—Corgan, Crow, and Smith did their duty and sang. The setlist was mostly Pink Floyd songs plus a handful of covers (“Lean on Me” by Bill Withers, “The Ghost of Tom Joad” by Bruce Springsteen, “Hallelujah” by Leonard Cohen, “A Change is Gonna Come” by Sam Cooke). Corgan, sans guitar, sang “Wish You Were Here,” “Brain Damage,” “Eclipse,” “Comfortably Numb,” and Bob Dylan’s “Forever Young,” the final song of the night, when everyone joined in revival style. I was bummed that they skipped John Lennon’s “Imagine” with Morello singing lead, which Waters pumped up in a radio interview last week. The show was no pity party—the MusiCorps players are phenomenal players, and humbled every rock star on stage with them. Waters played lots of songs from The Wall on Friday, but he couldn’t have been further from the twisted Pink of 1979—there was no sense of it being all about him, and he was reflective and appreciative of everyone in the room. It wasn’t ghastly or grotesque either: it was the idealism and spirit of “Imagine” realized in the wake of dismemberment and dislocation. The pathos of The Wall had become something beautiful, a tribal connection that everyone was lost in for just a few hours.