Mark Mitchell's new record as Clue to Kalo is all energetic, literate pop. 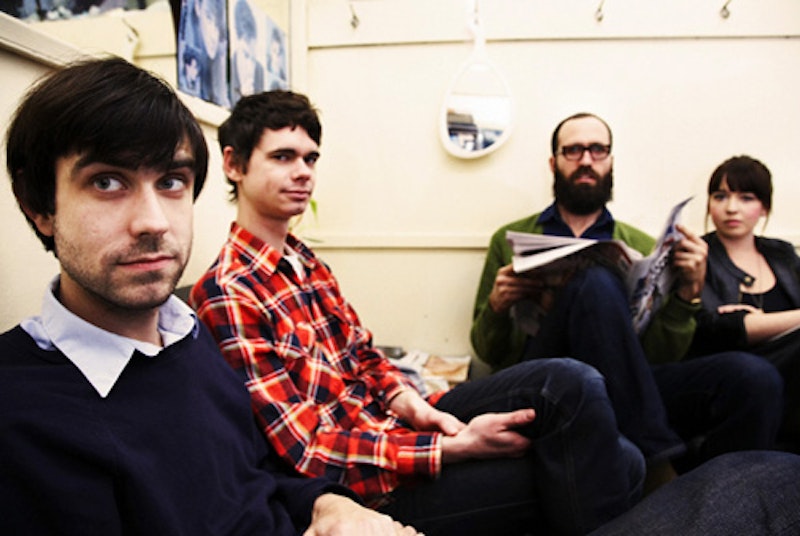 After the release of his second album in 2005, the critically-lauded One Way, It's Every Way, it took Mark Mitchell nearly four years to write, record, and release his follow-up, Lily Perdida. That album, a concept work of folktronica story-songs, was finally put out by Mush Records in late January, and it is as beautiful a recording as any you'll hear this year. Mitchell, still living in his hometown of Adelaide, Australia, recently suspended his Ph.D. studies in English literature to focus full-time on his music career. Recording under the name Clue to Kalo, Mitchell mixes samples and various electronica backing sounds, with a more traditional folk-pop arrangement to wonderful effect. If you're a fan of the Elephant Six Collective (Apples in Stereo, in particular), early Flaming Lips, or the Unicorns, then Clue to Kalo should top your list of Bands to Check Out Pronto. I talked with Mitchell last week about how Lily Perdida has changed his sound, and what his plans are now that he's skipped out on his doctorate.


SPLICE TODAY: You're still in Adelaide, right? How's the music scene down there? What keeps you in Adelaide anyway?

MARK MITCHELL: Yeah, I'm still here. There're a lot of reasons why. For one, it's easy to live here; the rent is cheap and anything worth anything is easily accessible. Everything exists on a really manageable scale, which probably also indicates that part of the reason I haven't moved anywhere else is because I'm anxious and the idea of moving to a new place scares me. I like leaving here regularly, living somewhere for a few months. It's a shot in the arm; it gets me excited to come back here and work some more. I couldn't wait to get home from the U.S. to start work on Lily Perdida.

I also just think Adelaide's a nice place. There are a lot of different-sounding bands playing shows with each other, brought together more by social circumstances than musical affinity, although there is a lot of genuine respect in that diversity. Sometimes I wish there was a little more interest here in the music that I write, but I'm sure that's mostly my own fault. I don't push it hard enough.

ST: Can you tell us about Lily Perdida? It's a kind of concept album, so how did this all come together? How did you write and record the songs?

MM: All my records start with some vague interests, stylistically and thematically, that are sort of hanging around, and then it comes to the point where I have to stop procrastinating and focus on what I want to do with them. So I had this idea of a record about one person which was not really about that person at all, which was more about the people around her, but then I also wanted it to incorporate a lot of the more abstract conceptual ideas that I'd been interested in with my studies, in particularly in the way I could apply them to folk music. I liked the idea that the story of Lily Perdida could read like the process of perpetual revision I saw in folk music.

While we were in the U.S. we had some time on our hands so I got hold of some collections of folk song lyrics and started reading, trying to get a handle on the language and the themes. I tried to identify some of the archetypes and write songs that not only fit the narrative but also assumed these forms (the lullaby, the murder ballad, the disaster song, the hymn), taking them out of context but also touching upon some of the language that kept coming up. So, for example, with the hymn, I wanted it to have the same unadulterated praise for its subject, using a lot of that joyful language, but I wanted it to be about Lily, not about God. So it seemed to me you could write something similar, loosely following some of the rules of the hymnal arrangements, but making it about a young boy who's in love with her, who worships her, who puts her above him, who thinks she can save him from himself. From a particular perspective, this is what's happening in a hymn.

By the time we returned to Adelaide I had notes on what I wanted each song to be about, and what I wanted it to sound like. I then spent about eight months writing and recording everything. I didn't find Ellen until very late in the project, after all the songs had been written and mostly recorded. She came in and we recorded her parts very quickly. Then I got some friends to record some final parts and it was finished.

Incidentally, I think concept records get a bad rap. People immediately assume a pretension when someone writes this kind of record, which I think is a little silly. Approaching a record as a single thing rather than a collection of songs doesn't seem like that much of a stretch to me. I think it can be a really satisfying process. Even the term "concept record" is sort of ridiculous. "I like that concept movie that you made." "I didn't think much of that guy's concept novel." Of course, it's a different context, but you know what I mean. People think this kind of record is pretentious by nature. Being pretentious is totally a charge I'll take, if that's how people feel about what I write, but I'd like to think it's not simply because of the form of the content. There're plenty of other things to pick on.

ST: Why the vinyl-only release on your 2006 Man Who Took A Step... EP? You strike me as a record collector kind of guy.

MM: I wrote those songs for a tour EP. It was sold at shows on CD-R. Mush came up with the idea of releasing it also as a limited edition picture disc 12". I'm not sure if it ever happened though. It was a good idea, although I'm actually not vinyl crazy. I flirted with it for a while when I was working at a record store, but I'm pretty anal with my objects and the thought that a record is slowly being destroyed by the stylus sort of freaked me out. It's like a spy letter that slow-detonates as you read it! CDs have the illusion of being indestructible. I have collected a fair amount of music but I'm not too fussed about the format. A lot of my friends are record collectors because of the sound, because they're DJs, or just because they love the objects. As far as the latter goes, books are the things I most like to collect, because it feels good to be surrounded by them.

ST: What are you reading right now? Your albums are intensely literary, but not in a pretentious Decemberists kind of way. You went to college for English lit., right?

MM: Yeah, here in Adelaide. I didn't finish my Ph.D., because I found it was more fun to take some of the same ideas and make stories or songs out of them. I don't regret having done it, and actually miss it a lot. I guess I could finish at some point, but I'm not sure if I have the energy. I tend to read a few different things at once. If I read something theoretical, for example, then I'll balance it out with something that's just fun that I can read on the bus. I just read a bunch of Raymond Chandler and some folklore and Greek mythology, and Mezz Mezzrow's blues memoirs. I was reading V. by Thomas Pynchon but I left it on a plane. A friend of mine, thinking she owed me several Christmas and birthday presents, just gave me almost 50 books. Among them, I'm excited about reading the history of Greece and Rome and this accessible guide to how the universe works.

ST: Who are some of your favorite bands to play with, both in Australia and on the international tours you've done?

MM: We've been really lucky to play with some great people. We'll always be good friends with the Architecture In Helsinki people; some of our first shows were with them. Qua is a fantastic friend and a great musician. Casiotone for the Painfully Alone is one of our best music friends and one of our favorite people in general too. It's really important to me to play with people that I like as people. I don't care how different or similar their music is to mine; as long as I respect what they do and find them funny and nice then I'm happy.

ST: What are your plans for 2009? Lily Perdida was so long in the works I guess it feels good to finally have it out there.

MM: Yeah, it does. I'm an idiot with that stuff because I need the sense of closure that comes with releasing a record before I can really think seriously about the next thing. When I first started recording I'd burn CD-Rs of the music I was making and sell them in a local record store, and the simple act of finalizing each set of songs meant I could properly ask myself what I wanted to do next. So while the release of this record was delayed I wasn't sure exactly what to do with myself, and when it finally appeared it was a big relief. I was working a little on a book before I started Lily Perdida, and enough of the book made it into that record to make the novel redundant, but I'm excited about the prospect of writing a novel and had some new ideas in the last few weeks. I’ve started working on a new record. I'm trying something new and I'm thinking about whether or not I should change the name of the band. One thing I noticed with Lily Perdida particularly was that I'm really disappointing some people who miss all the electronic sounds. Maybe changing the name will mean a clean break.

Check out Clue to Kalo on MySpace